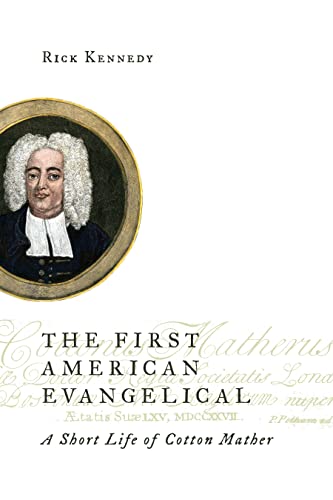 The First American Evangelical: A Short Life of Cotton Mather

In the newest offering from the Library of Religious Biography series, Rick Kennedy argues that Cotton Mather represents the earliest form of American evangelicalism. In his book The American Evangelical Story (Grand Rapids: Baker, 2005), respected historian Douglas Sweeney once described American evangelicalism as a twist that occurred within Protestantism after the collapse of Puritan New England, and for Kennedy, Mather epitomizes that twist. Mather stood at the passing of the old Puritanism of the Massachusetts Bay Colony and the rise of the so-called Protestant interest of subsequent generations. The Protestant interest concerned itself not with zealously guarding the spiritual purity of New England, but rather with incorporating New England into the larger British Empire in the name of opposing Roman Catholic nations such as Spain. Mather saw this approach as compromise, not because its advocates were necessarily unorthodox, but because he feared a loss of zeal and piety would result. Mather desired, instead, an all-day-long faith. This faith would take personal holiness and the dramatic working of the divine in human life seriously. He entitled his model the “evangelical interest” and gathered supporters around his cause.

Kennedy surveys aspects of Mather’s life and works to demonstrate his evangelical credentials. Mather called for concerts of prayer and for personal piety in a manner similar to that of the forthcoming Great Awakening; indeed, the narratives featured in Samuel Mather’s biography of Cotton Mather helped to spur some of the Great Awakening’s earliest revivals. Mather approached education in a manner similar to later evangelicals by desiring instruction that took the Bible seriously and sought to affect both the intellect and the affections of the students. He contended against rationalist approaches to Christianity that rejected the possibility or significance of miracles and believed in a world engaged in a cosmic battle between good and evil.

Of course, Mather’s acceptance of the miraculous led to interesting interactions. Most contemporary audiences associate him with the infamous Salem Witches Trials. Kennedy actually seeks to defend Mather on this point, claiming that Mather formulated an approach to demon possession that was much more moderate than the one employed by the magistrates at Salem. Kennedy further explains that even Mather himself believed that the trials proceeded on the basis of mistaken principles and that much modern suspicion of Mather is shaped by unsubstantiated claims raised by Robert Calef, one of Mather’s harshest critics.

In terms of evaluation, Kennedy is not the first to connect Mather with evangelicalism. Richard Lovelace did so in the 1970s, in part by exploring Mather’s interaction with German pietism. Kennedy’s volume is rather unique, though, due to its extensive examination of the historical context in New England, which gave rise to Mather’s evangelical identity. How one decides to define the term evangelicalism is, as always, a difficult point of contention. Kennedy defines it as a populist movement within Christianity that seeks to correct a lackadaisical spirituality. While one might wish for a thicker definition, one based around shared doctrinal convictions, Kennedy’s description appears historically accurate. In this sense, his argument for Mather as a pioneering American evangelical holds.

Also, noteworthy is Kennedy’s engagement with Mather’s epistemology. Mather relied heavily on the concept of testimony. He argued that one should receive not only the divine testimony provided in Scripture, but also claims made by human acquaintances that are of good character. He deemed such an approach more reasonable than the rationalism favored by his opponents because it did not carry with it an unwarranted suspicion toward the possibility of divine activity in the world.

While Kennedy accurately describes Mather’s position, he does not sufficiently critique it. Kennedy desires to connect Mather’s reliance on testimony with the rise of the American social sciences, but perhaps one can grant that Mather’s critics had a point when they claimed his epistemology coupled with his fascination with the supernatural could lead him to accept extreme positions. Mather, for example, accepted the testimony of his associates as true when they claimed that one girl thought to be demon possessed levitated in the air. He performed an experiment on girls considered demon possessed in which he held books before them in an effort to determine which books demons hated and which ones they did not. At one time he even claimed to have cut with his bare hand an invisible chain that a demon was using to restrain a young victim.

While evangelicals rightly accept the reality of supernatural forces at work in this world and even the possibility of miracles, one wonders if Mather’s strong reliance on testimony provided him with enough resources to prevent him from falling into gullibility. Kennedy wishes to deliver Mather from the critiques of his rationalist opponents, and he helpfully disassociates him from the problematic Salem Witch Trials, but Mather’s system was itself not above criticism.

Still, Kennedy’s book is an engaging and insightful introduction to Mather. It argues well that Mather was a forerunner of American evangelicalism, and it helps to correct some misperceptions regarding the events at Salem. One might wish for a more critical biography of Mather, but that will likely arrive with Reiner Smolinski’s forthcoming volume. Even after the release of Smolinski’s work, however, Kennedy’s book should retain its value due to its accessibility and its interest in evangelical history.