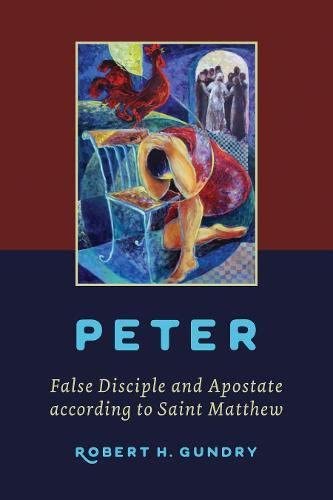 Peter: False Disciple and Apostate according to Saint Matthew

Robert Gundry’s commentary on Matthew (Matthew: A Commentary on His Literary and Theological Art [Grand Rapids: Eerdmans, 1982]) caused quite a stir in certain circles, and forced quite a serious re-think in many others. His new, much shorter but no less provocative book on Matthew’s portrayal of Peter continues very much in the same vein, yet I imagine the twenty-first century audience might react more placidly, given more recent trends in evangelical scholarship and readership.

But I hope not. It is with some amount of surprise that even Gundry, in his afterword (pp. 107–08), asks why it has taken until now for someone to explain Matthew’s view on (the otherwise “Saint”) Peter. Of course biblical harmonization plays a crucial role, as does tradition concerning Peter’s martyrdom and (symbolic) status as first Pope; other factors may include pastoral concerns with the forgiveness of wrongdoing, and indeed a (perhaps modern?) aversion to judgement. It is however as an exegete that Gundry reads the Gospel of Matthew and finds there a Peter who personifies the failed disciple of Jesus’ teaching.

Gundry examines the appearances of Peter in the gospel prior to Matthew 16, then in the (perhaps) key passage of Matthew 16:13–23, and in the following narrative until the conclusion of the gospel. He also considers the instances where Matthew has chosen to omit Peter from traditions taken over from his major source, Mark (a brief note in the introduction states simply that, if Matthean priority is suggested, then Mark, like Luke and John, is involved in the rehabilitation of Peter, p. 4). He then gives somewhat brief overviews of the teaching of the gospel on false discipleship and persecution, well-documented areas of Matthean studies which here only require connections to be drawn to the portrayal of Peter.

Peter is introduced in Matthew (to a Greek-speaking audience of “first-time auditors,” p. 4) as a man called Πέτρος, and at no point in the gospel is it claimed that this was Jesus’s name for him. The name does not appear at first to carry any status or honor. He is, of course, the first of the disciples to be called, but it turns out that many who are first will be last (Matt 19:30). Peter is never to be considered didactically exemplary, and even his addressing Jesus as “Lord” is irrelevant for the issue of his status, as both false disciples (Matt 7:21–22) and non-disciples (supplicants throughout the gospel) use this form of address. Most importantly, perhaps, Matthew’s addition of Peter’s walking-on-water does not paint our first disciple in a good light: he doubts it is Jesus, tests Jesus (not unlike the devil had done in the wilderness), and then doubts again even while experiencing the miracle. Peter has little faith, and it is the other disciples, once the two have boarded the boat, who confess Jesus as the son of God (pp. 10–13).

In Matthew 16 Peter plays catch-up, and we have the foundational “you are Peter” and “on this rock” (16:18). In a detailed analysis of this passage Gundry argues, with perhaps inevitably limited success, that this is not to be seen as a positive evaluation of Peter, and his salvation and status are by no means assured (“ultimate fate is determined by what is done with the privilege, not by the privilege itself” [p. 17]; cf. the list of Judas’s privileges that are ultimately revoked [pp. 88–89]). Gundry concludes that the “rock” on which Jesus builds his church is not Peter, rather “these words” of Jesus’s teaching (Matt 7:24). Matthew then proceeds to emphasise Peter’s incorrect understanding in his discussion with Jesus, in which he is both “Satan” and “a stumbling block” (Matt 16:23). It is not going well for this disciple, at least.

Peter makes further mistakes as the story progresses to a mountain-top, where he himself (in Matthew) offers to build three tents, but is interrupted in his proposal by none other than God himself in a voice from heaven, “to butt up against Peter’s egotistical malaprop as an abrupt and stringent correction of it” (p. 33). The episode (unique to Matthew) of the payment of temple tax is examined and shown not necessarily to be a positive one (pp. 33–35), Peter’s idea of forgiveness is shown to be amazingly insufficient (pp. 36–37), and his insistence that he will not abandon his Master (from Mark) is reworked by Matthew to increase the irony and hypocrisy of it all (pp. 39–41). Gundry considers every appearance of Peter in the narrative, and while the arguments do not always convince that the portrayal is consistently negative, they do speak strongly against any idea of Matthew rehabilitating the negative image of Peter he read in Mark.

Not all of the exegesis is equally convincing. Gundry’s suggestion, for example, that the attribution of Peter’s insight (in declaring “You are the Messiah, the son of the living God”) to the Father in Heaven is so that “Peter gets no credit” (p. 16), or the outright denial of some degree of “intimacy” between the two in the episode of “Peter’s Penny” (pp. 33–35), show perhaps more of Gundry’s creativity than of the evangelist’s. Furthermore, the argument against the ultimate rehabilitation of Peter leans heavily on the idea of a mixed church, in which Peter (alone?) represents the bad element among “the Eleven” at the close of the gospel. While it is true, as Gundry argues, that no rehabilitation of Peter is narrated (p. 66), there is also very little to lead one to understand Peter as the apostate at this final stage; hence, perhaps, why the idea has not been proposed until now.

Comparison with Judas arises from Matthew’s out-of-sequence positioning of Judas’s remorse and suicide right after the account of Peter’s denial of Jesus. Peter not only denies Jesus (as Jesus too will deny him, Matt 10:33), but swears an oath, in violation of his Master’s instructions (5:34) and even as Jesus himself refuses to do so before the High Priest (26:62–64). This all results in Peter’s retreating further and further from the scene of Jesus’s trial, until he is outside, in the dark, and weeping; the only thing missing to complete his damnation is the “gnashing of teeth” (Matt 8:12, etc.). His name is missing from the address to the women at the empty tomb, and his presence among “the eleven” on a mountaintop in Galilee is only reflective of Jesus’s recurrent teaching of a mixed community of wheat and tares (Matt 13:24–30, 36–43) and of good and bad fish (13:47–49).

Gundry provides a list of possible arguments that could be made for Peter’s ultimate rehabilitation and salvation, and he counters each (pp. 52–56). In the end his arguments certainly carry some weight, with the two major obstacles (aside from broader canonical/theological questions) the explanation of σὺ εἶ Πέτρος at Caesarea Philippi, and the ambiguous position of Peter among the eleven at the Great Commission, which, despite much great exegesis, still remain fertile ground for opposing arguments. Nonetheless, in its relentless focus on the quest for Matthew’s perspective on Peter, the book provides a stimulating counterpoint to other recent scholarly contributions that have aimed at reconstructing a single historical/canonical Peter (Larry R. Helyer, The Life and Witness of Peter [Downers Grove. IL: InterVarsity Press, 2012]), or shifted the focus toward the remembered Peter of the early church (Markus Bockmuehl, The Remembered Peter, WUNT 1/262 [Tübingen: Mohr Siebeck, 2010]). Gundry reminds us of some of the strengths of the redaction criticism of the 1960s, with its interest in the gospel-writers as authors and theologians in their own right.

In his conclusion Gundry notes that these observations may have repercussions for the date (before Peter’s martyrdom?) and location (Antioch, where Paul openly opposed Peter?) of the Gospel of Matthew. The monograph’s main contribution, however, is to remind us that diversity and dialogue among canonical texts are not to be overlooked or smoothed over too quickly for the sake of dogmatics; the rich variety of gospel literature surely has great benefits for pastoral theology.