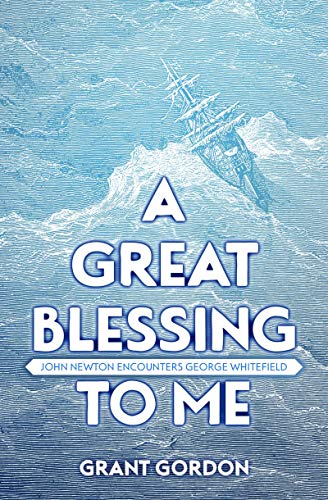 A Great Blessing to Me: John Newton Encounters George Whitefield

George Whitefield (1714–1770) has been described as an “evangelist par excellence” and considered by some as the “greatest preacher” of the 18th century Evangelical Revival, while John Newton (1725–1807) has been deemed the “letter writer par excellence” of the revival and known as “the ablest exponent of its pastoral psychology” (p. 2 and 197). A Great Blessing to Me, the phrase John Newton used to describe George Whitefield shortly after his death, is the title of Grant Gordon’s most recent work. It records their hitherto untold fifteen-year friendship, neglected in previous scholarship, and demonstrates how Whitefield was a blessing to Newton.

For many years Gordon pastored Baptist churches in Ontario, Canada, and served for a time at Tyndale Theological Seminary in Toronto. Now retired, Gordon continues to publish material that is academically robust as well as spiritually earnest. Gordon has received accolades for this particular work by respected scholars in the field of Evangelicalism including Mark Noll, David Bebbington, Jacob Aitken, and Michael Haykin. Gordon is qualified to write upon the subject having also published Wise Counsel: John Newton’s Letters to John Ryland Jr (Edinburgh: Banner of Truth, 2009).

A Blessing to Me is an accessible work of scholarship covering a mere 220 pages. The work’s appearance is crisp, its content is thoroughly researched, and its style makes the enfolding story both enjoyable and profitable. The narrative begins by recounting the life of both men up until the point where their stories converged in 1755 with a special emphasis on their spiritual development. Whitefield was in London from 6–14 June 1755, during which time Newton was able to hear him preach and briefly met Whitefield in person. Newton described Whitefield’s discourses as “extraordinary and impressive” (p. 58). In 1755 Newton secured the senior customs position of Tide Surveyor in Liverpool. His appointment coincided with Whitefield’s first and only planned preaching visit to the city. This time Newton not only heard Whitefield preach nine times, but he dined with the revival preacher on such numerous occasions that Newton’s friends gave him the name “young Whitefield” (p. 80). Frustrated in his attempt to be ordained, Newton was encouraged to published his life story, An Authentic Narrative (1764), which soon became popular and helped secure him a curacy in Olney. The village had been deeply affected through the regular ministry of Whitefield. Throughout the 1760s Newton continued to correspond with Whitefield and visited him when Whitefield was preaching in London. During this time Newton was drawn deeper into the circles of Evangelicalism.

The final two chapters analyze Whitefield’s direct and indirect impact upon Newton and review their comparative similarities and differences. Whitefield directly impacted Newton through his public ministry (he heard Whitefield preach twenty times in twelve years), which brought him greater assurance regarding his life and ministry. Similarly, Whitefield set Newton on a new trajectory regarding the latter’s understanding of the unity of believers (expressed through the integration of hymns and times of communion in his services). Indirectly, Whitefield impacted Newton by extending his evangelical network and by priming Olney for Newton’s evangelical ministry. Gordon notes the two men’s similarities that included a dislike of denominational and doctrinal conflict, a large vision for the church, loyalty to the established church, and their celebrity status. They also had their differences, namely the qualities of their marriages and the sorts of ministries they engaged in.

Gordon’s work provides an insightful window into the world of eighteenth-century Evangelicalism and the lives of two prominent evangelicals that is helpfully illuminating despite its brevity. For the acquainted reader, Gordon’s skilful contextualisation is a good refresher and will hasten one’s ability to understand the core material presented. Likewise, for the curious beginner, Gordon’s investigation represents an easy access point. Gordon draws out the impact Whitefield had on Newton by inference that leaves the reader clearly aware of the potential personal application. A key point that struck me was just how important the relationships and networks of likeminded evangelicals are to the effectiveness of the mission of the church. Gordon is also realistic in his assessment of Newton’s relationship with Whitefield and thus avoids hagiography on the one hand and sterility on the other.

While the core chapters are well developed the introduction and conclusion are lacking. For such a good book the introduction is somewhat anti-climactic, with a brief and vague thesis. The conclusion is also less a summary than it is a reworking of material presented earlier in chapter five. The historiography in the introduction also does not clearly state what the “third manuscript” and “other letters” of Newton’s are that have not been available to biographers since 1868 and “some not known at all” (p. 15). While included later, as these play a role in establishing the novelty of the work their statement at the outset would have added to a work that on the whole represents a well weaved historical narrative and evaluation.

To use a common category of Newton’s (2 Tim 2:21), any Christian work ought to be evaluated according to its “usefulness.” The spiritual wisdom found within the lives of these two divines should cause the reader to not only learn more about them but the God they proclaimed and His amazing grace displayed in their ministries. For those who enjoy A Blessing to Me they can await Gordon’s forthcoming work on the relationship between Newton and John Wesley (1703–1791).