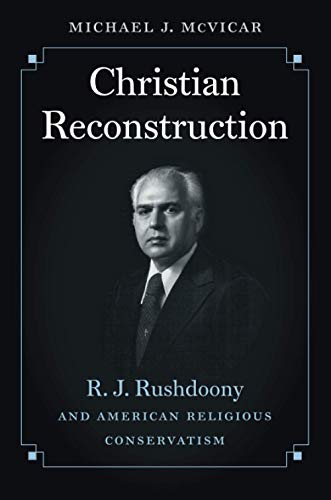 Michael J. McVicar, assistant professor of religion at Florida State University, has provided an “intellectual and organizational history of Reconstructionism” (p. 4) in Christian Reconstruction: R. J. Rushdoony and American Religious Conservatism. Although Rushdoony is the central player in his narrative, the author insists that Rushdoony is not its real focus (p. 11). Indeed, the volume traces the diverse expressions of the movement in thinkers such as Gary North, Greg Bahnsen, John Whitehead, Kenneth Gentry, James Jordan, David Chilton, Gary DeMar, Doug Phillips, and others. Rushdoony, though, was the dominant figure in the movement, and it is therefore proper that the volume outlines his career—beginning with his education at the University of California in Berkeley and the Pacific School of Religion; continuing with his ministry as a missionary at the Duck Valley Indian Reservation in Nevada and his subsequent pastorates in the PCUSA and the OPC; and culminating with the establishment of an educational institution, the Chalcedon Foundation. Along the way, we are reminded that Rushdoony developed a loyal following while at the same time eliciting intense feelings of dislike. One moderator of the PCUSA general assembly stated that he was a “devil possessed” (p. 56); Franky Schaeffer declared that Rushdoony and his followers were the equivalent of the Taliban (p. 215).

McVicar has served us well by explaining a religious and political movement that is not only controversial, but also “poorly understood” (p. 4). What then is Dominion Theology, and what are its central ideas? Dominion Theology asserts that Christians are to “take dominion” over all spheres of human society—including the state—and “turn them toward explicitly Christian purposes” (p. 4). The “bedrock” of this theology focuses upon the “trine concepts of Christian dominion, biblical law, and postmillennial eschatology” (p. 125). The implementation of biblical law entails the reconstruction of society, which will then lead to the Second Coming of Jesus. In this connection, Rushdoony was a vigorous opponent of statism, believing that there are “two claimants to the throne of godhood and universal government.” There is the state, which claims to be our “savior”; and there is the “Holy Trinity, our only God and Savior” (p. 100).

The most distinctive and controversial element in the project of Christian Reconstruction is the teaching that Rushdoony articulated in The Institutes of Biblical Law. He insisted that the Mosaic legal corpus remained “relevant and binding for modern Christians” (p. 105). “Every jot and tittle of biblical law” was to be implemented by Christians at the present time (p. 129). McVicar notes that this position clashed with the teaching of the Neo-Evangelicals, men like Billy Graham and Carl F. Henry. Alternately, they insisted that social change in America would only occur as a result of “the regenerative, transformational effects of individual conversions” (p. 123).

McVicar fails to mention in this connection that theonomy is a major deviation from the Calvinist and Neo-Calvinist tradition on biblical law. John Calvin had maintained that those who insist upon “the political system of Moses” rather than being “ruled by the common law of nations” embraced a position that was “false and foolish” (Institutes IV.20.14). Abraham Kuyper was no less adamant than Calvin in his position: “Taking Holy Scripture as a complete code of Christian law for the state, would, according to the spiritual fathers of Calvinism, be the epitome of absurdity” (“Our Program,” in Political Order and Plural Structure of Society [Atlanta: Scholars, 1991], 248). McVicar’s silence on how Rushdoony’s teaching related to the Reformed tradition is striking considering the fact that he draws attention to the continuity that exists between Rushdoony and the Calvinist tradition on the issues of sphere sovereignty (p. 133) and postmillennialism (p. 135).

The real strength, though, of McVicar’s discussion of Rushdoony’s theonomic position relates to how he positions Rushdoony in the historical context of the 20th century. McVicar reminds us of the breakdown of law and order in the United States in the 1960s. It was a time of destructive student demonstrations, riots, sexual liberation, recreational drug use, and contempt of traditional social values (p. 107). The answer to the problem, according to Rushdoony, was to be found in the imposition of the Mosaic legal code upon the American populace. A reconstructed America would mean that the state would execute people for blasphemy, propagating false doctrine, homosexuality, and other deviations from biblical law (p. 130–31). This is one of the most helpful points of the book—theonomy was Rushdoony’s response to the “turmoil” of the 1960s (p. 107).

McVicar points out that in 1970 compulsory education laws made homeschooling “nearly impossible” in many states (p. 2). The idea, as Rushdoony put it, was that children “belonged to the state, to be taught the faith of the state, to die for the state, to work for the state” (p. 3). Today, Christian families almost take for granted that they have a right to educate their children in a home school. What made the difference? It was the work of Rousas Rushdoony, along with lawyers such as John Whitehead, who helped to shape legal reasoning in cases across the United States (p. 175–76). This may very well be the most significant and enduring legacy of the Christian Reconstruction movement (p. 230–31).

McVicar has capably presented the origin, development, and constituent ideas of Dominion Theology—a movement that still attracts many adherents from the American evangelical and Reformed community.