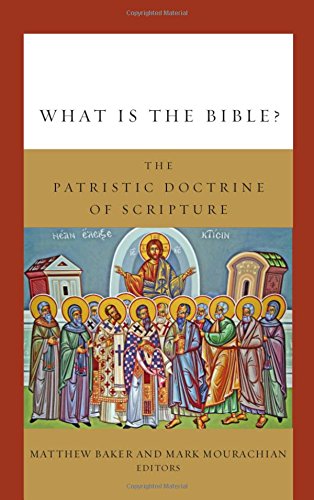 What Is the Bible? The Patristic Doctrine of Scripture

The introduction to this volume asserts that while scholars have written extensively on patristic exegesis, “far less attention, however, has been paid to the fathers’ understanding of the nature of Scripture itself” (p. xi). Accordingly, the volume—growing out of a conference at Princeton sponsored by the Fr. Georges Florovsky Orthodox Christian Theological Society—addresses the question of what the church fathers considered the Bible to be. Seven chapters deal with the way the fathers themselves understood the Bible, and these chapters treat not only patristic writers whose selection is obvious (Origen, Ephrem the Syrian, John Chrysostom, and Maximus the Confessor) but also voices that are much less well known (Athanasius’s friend Sarapion of Thmuis, three monks from sixth-century Gaza, and the many voices of the Philokalia). These patristic chapters are followed by four chapters with more of a modern focus, chapters dealing with famous retrievals of the patristic doctrine of Scripture by Georges Florovsky and T. F. Torrance, with the little-known 20th century Serb Justin Popović, and with the history of modern biblical criticism.

One could argue—especially from an evangelical perspective—that the volume does not succeed in its stated aim to deal with the doctrine of Scripture (what the Bible is) rather than with hermeneutics (how to interpret it). Every chapter actually does address biblical interpretation, and four of them even include a form of the word “hermeneutics” or “exegesis” in the title. In this reviewer’s opinion, however, we should take the failure to distinguish sharply between the doctrine of Scripture and hermeneutics not as a negative, but as a positive. In its very failure to make that distinction, the volume serves to remind the reader that how we approach the Bible is inextricably linked to what we think the Bible is, or contains. This fact shines most brightly in Michael Legaspi’s final chapter on modern biblical criticism, in which he argues that the rise of biblical criticism as a discipline accompanied the rise of an Enlightenment program to use the Bible as a tool for promoting a tolerant society, rather than as a tool for sectarian conflict and even religious war.

The link between the doctrine of Scripture and hermeneutics also appears clearly in the earlier chapters, in which varying (not necessarily complementary) perspectives on what the Bible is mesh with corresponding prescriptions about how to read it. For example, as John McGuckin argues, Origen believes the Bible is about the ascent of the soul to reunion with God, and the biblical writers to whom Origen gives most precedence are the ones he sees as most enlightened. Matthew Baker’s chapter on Ephrem shows that one must view all biblical language as anthropomorphic, since the entire Bible grows out of God’s self-revelation in created categories inadequate to demonstrate fully who he is. Alexis Torrance argues that the monks of Gaza see Scripture as the account of the refracted glory of God: the glory inherent in Christ is refracted onto the saints, granting the interpreter justification for applying biblical passages that are about Christ to the saints as well.

These varied ways of linking the doctrine of Scripture to hermeneutical method give the volume a rich texture that can help open the reader’s eyes to the varied ways the patristic and neo-patristic worlds use the Bible. Ultimately, the crucial point emerges: what we think the Bible is leads to how we approach it, which leads to what we do with it. Accordingly, this volume is profoundly valuable for evangelical readers, because it shows us a different vision of the Bible than most of us possess (I would say several different visions, because I am not convinced about the underlying unity beneath all the visions presented in the volume). In doing so, the volume forces us to ask the question, What do we think the Bible is? We evangelicals are quick to proclaim the truthfulness of the Bible, to develop methods to study it, and to insist that we should apply it to our daily lives. It is, however, one thing to say that the Bible is true, and quite another to affirm what it actually is. Do we believe the Bible is a true account of people’s experiences with God? Do we believe the Bible is a true manual for the soul’s return to God? Do we believe the Bible is the true account of God’s descent to humanity? This volume forces evangelicals to ask this crucial question, and thus to ask what we are doing with the Bible that we affirm so highly.

If this is the volume’s major contribution, then I would venture to suggest that it might have made that point even more clearly if it had been structured differently. I believe that Legaspi’s chapter (the final one, described above) would have served even better as a first chapter that could have attuned the reader to the fact that biblical criticism in the past 250 years has altered the Bible from a text whose message is to be heeded in itself to a text put to the service of a different social aim. With this provocative starting point, the volume could then have asked what the Bible’s actual aim is (encompassing what it is, how we should approach it, and what we should do with it), and then proceeded to give its varying answers to that question. Most evangelicals sense that there is something fundamentally wrong with the way the Bible is studied in the liberal academy today, but we may not be able to put our collective finger on what the problem is (other than stating the obvious: that the liberal scholars do not believe the Bible the way we do). This volume helps us greatly in understanding more precisely what is wrong with liberal biblical studies, and I believe it could have done so even more forcefully with the re-arrangement I propose. In any event, it is a thought-provoking and valuable contribution to the question of what the Bible is, one that evangelicals as well as Orthodox should consider carefully.

I would like to close this review by lamenting, as the volume itself does, the tragic death of one of its editors, Fr. Matthew Baker. This is the second volume (that I know of) edited by Matt to have appeared since he died, and its publication reminds me yet again how much we miss him.