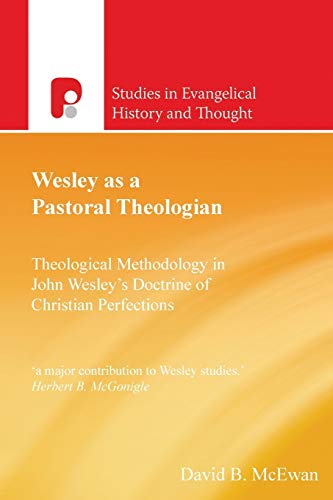 Wesley as a Pastoral Theologian: Theological Methodology in John Wesley’s Doctrine of Perfection (Studies in Evangelical History and Thought)

Although the study of John Wesley’s theological method has received great attention since mid-century, the field continues to support fresh perspectives. One of the latest comes from the hand of David McEwan, Academic Dean and Senior Lecturer in Theology at Nazarene Theological College in Brisbane, Australia. After Albert Outler coined the term “Wesleyan Quadrilateral” in the 1970s, students of Wesley have been groomed to use it as a model for theological interpretation so that even an elementary student of Wesley would recognize Scripture, reason, tradition, and experience as the methodological grid of choice. Though the Quadrilateral has had its detractors, McEwan does not consider himself among them. Rather, this author seeks to revise Outler’s model in light of the postmodern conscience and its particular emphasis on community.

This study begins with the assertion that the Quadrilateral has been employed statically and frequently overlooks Wesley’s pastoral concern. The consequence is the mistaken questions regarding the interrelation of the elements. Is there a hierarchy in the ordering of the elements? Is Scripture superior to the others? Can doctrine be based on some but not all of the elements? How does the Holy Spirit relate to the elements? It is this final matter which McEwan identifies as the real fault in the way the Quadrilateral has been viewed. The absence of a place for the Holy Spirit in the model is not inherent but is the result of misuse. McEwan proposes a new way of viewing the model.

McEwan’s constructive case builds on and lends further support to the consensus that Wesley was foremost a pastoral theologian. McEwan discerns that the Holy Spirit is not merely a corollary to the Quadrilateral but is really the energizing authority. The case proceeds through a chronological survey of Wesley’s doctrine of Christian perfection. The narrative begins with the general context in which Wesley was born, proceeds to his experience at Oxford, then his leadership of the Methodist movement, and ends with the theological reflection of his mature years. The survey seeks to identify the remarkable consistency of Wesley’s emphasis on love and relationship throughout his career. Central to love and relationship is the person of the Holy Spirit. McEwan concludes that a revised model of the Quadrilateral should make the Holy Spirit the center; that is, all of the elements must somehow rely on and point to the Holy Spirit.

In his revised model of Wesley’s Quadrilateral, McEwan adopts the metaphor of a neural network in which the Holy Spirit is the energizing influence. Rather than following the typical order in which Scripture is given the prominent place of authority, he equates all of the elements but suggests they are static apart from the energizing influence of the Holy Spirit. In essence, there is only one authority—the Holy Spirit—without which any of the elements serve their purpose. The elements are interlinked by the Spirit so that in a given circumstance any of the means may be employed as authoritative. Scripture, reason, tradition, and experience are not tools at our disposal, but means controlled by the Holy Spirit for bringing us to the knowledge of the truth. The Spirit, however, does not exist in a vacuum, but in a community of believers. The community is where the Holy Spirit operates and utilizes the elements of the Quadrilateral. Rather than “tradition,” McEwan prefers “community ethos” to encapsulate the progressive nature of Christian community.

The author states that part of the purpose of this study is to discover whether or not John Wesley had a distinctive theological method. Are we to presume that Wesley’s emphasis on love and community is distinctive? McEwan neither argues for distinctiveness nor supplies clarity on what that distinction may be. To accomplish this goal, one would expect a comparison of Wesley’s theological method with that of others. But this is not what we have here; this study is strictly a study of Wesley’s theological method in comparison to how it has been generally understood in the past. There is virtually no attention given to the overall distinctiveness of it, which is probably for the better. This does not mean that his outcome was not distinct—indeed, his doctrine of Christian perfection is commonly understood as distinctive by both its adherents and detractors.

Although the book is not intended to break new ground in Wesley’s doctrine of Christian perfection, it certainly provides a fresh look at the doctrine. The previous classics written on the topic—William Sangster’s Path to Perfection (1943) and Harald Lindstrom’s Wesley and Sanctification (1946)—were written in quite a different era though they continue to be influential. I wonder though how sure a conclusion can be if it is based on a case study acknowledged to be the subject’s “most controversial doctrine.” Nonetheless, the angle that makes this study peculiar is not so much the doctrine of Christian perfection as much as its concern with Wesley’s communal context.

In my estimation McEwan has achieved the “more appropriate model” he set out to construct, and it should be noted and explored further. The author has accurately described the typical use and identified the problem with the Quadrilateral. His portrayal of Wesley’s actual theologizing more accurately places Wesley in line with the Reformed emphasis on Spirit and the Word. Never did Wesley separate the authority of Scripture, tradition, reason, or experience from its source in God Himself. Furthermore, the effort to integrate divine authority in the person of the Holy Spirit working in community is to be commended as a good use of post-modern concern. One should not conclude from this study, however, that the Holy Spirit has been entirely lacking before now. Unless one has an inferior and naturalistic understanding of Scripture, reason, tradition, and experience, the Holy Spirit is not absent from any one of the elements though perhaps ignored. For instance, Scripture has been given the place of prominence in the Quadrilateral by many Wesleyans on the basis of the doctrine of inspiration. None of the elements need to be viewed statically or used such. McEwan fails to give any attention to this aspect of the Spirit’s presence in the Quadrilateral. Nonetheless, I believe the author’s attempt to bring the Holy Spirit to the foreground is laudable for two reasons: (1) it provides a way of understanding the interrelation of the elements, and (2) it raises to prominence the divine authority that was intended to be infused into theologizing in the first place.