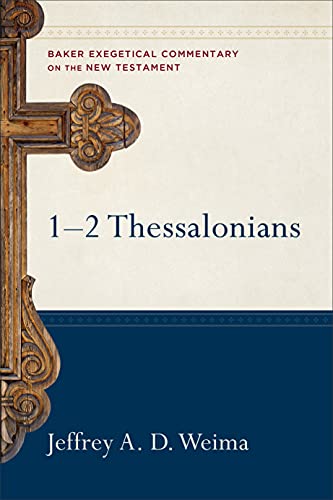 In his preface, Jeffrey Weima recounts how he started out working on this commentary as ‘one who had the vain ambition to write the definitive commentary on 1–2 Thessalonians’ but who is now ‘painfully aware of the shortcomings’ (p. xi) of what he has written. However, I think that the shortcomings are few and that Weima has actually achieved his goal! It is hard to think of a commentary on these two letters that will give Bible teachers and students as sure-footed a guide. Weima has produced an incredibly thorough, carefully-argued and judicious commentary. The great strength of this commentary is the comprehensiveness with which he considers exegetical issues, combined with the carefulness of his own conclusions (well illustrated in his conviction regarding 2 Thessalonians 2:1–17 that ‘one dares not speak more definitively than the text allows’ [p. 491]).

The commentary starts with a relatively short (58 pp.) introduction which concentrates on providing the background to the correspondence. This is the one place in the commentary where I was left wanting a little bit more. So, for example, Weima discusses the question of Pauline authorship of the letters (particularly 2 Thessalonians) across 16 pages. He rightly, in my opinion, argues for Pauline authorship but misses the chance to engage with some of the latest arguments for pseudepigraphical authorship of 2 Thessalonians (and the presence of pseudepigraphy in the ancient world more generally). Partly this is understandable given the target audience of the commentary, but given the prevalence of the contrary view in the literature it would have been helpful to see such an able evangelical scholar engage more thoroughly on the topic. Similarly, a little more on the relationship between the two letters would have been helpful. For example, on the question of the ordering of the two letters, Weima provides just one footnote.

Weima adopts a literary-epistolary analysis to the letters. Each section of each letter starts with a summary followed by a ‘literary analysis’ and then the ‘exegesis and exposition’ section. This middle section is a helpful new addition to this commentary series. In it Weima considers ‘the character of the passage’; ‘the function of the passage’; ‘the extent of the passage’ and the ‘structure of the passage’. Although busy preachers and teachers may be tempted to skip over this section to get to the detailed discussion of a particular passage, this section, I think, will provide real help in the preparation of sermons and bible-studies in helping the reader think through the overall function of the passage. This section is particularly important on 1 Thessalonians 2:1–16 where Weima argues for a more traditional approach which sees this Paul’s defence of himself rather than a newer approach (following Malherbe and Lyons) which understands the passage as having a paraenetic or exemplary function.

In addition to the main sections, there are three excurses. The first discusses the question of whether 1 Thessalonians 1:9b–10 is a pre-Pauline fragment (Weima argues it is not). The second evaluates the textual issue in 1 Thessalonians 2:7—were Paul and his colleagues ‘gentle’ (ēpioi) or ‘infants’ (nēpioi) among the Thessalonians? Weima argues, on the basis of the strength of the external evidence, that the latter reading is correct. The final excursus discusses the identity of the ‘restrainer’ in 2 Thessalonians 2:6–7. Weima provides a comprehensive discussion and makes a very persuasive conclusion (which I won’t spoil by revealing in this review!).

In addition to the excurses, Weima includes extended discussions when considering particularly debated passages. So, on 1 Thessalonians 2:16 and Paul’s statement that ‘the wrath of God has come upon them’, he suggests that the prepositional phrase εἰς τέλος be understood temporally and that Paul is claiming that the wrath of God has come upon his people ‘until the end’, i.e., until the day of Christ’s return. Similarly, the command for each man to control his own σκεῦος (1 Thess 4:4) is given a thorough treatment with Weima cautiously concluding that the term refers to the man’s body or ‘sex organ’. As well as these detailed discussions on debated exegetical points, Weima also provides the occasional theological and pastoral reflection, for example on the wrath of God in 1 Thessalonians 1:9–10.

In short, this is an excellent volume which I think will be the definitive commentary on these letters for many years.

Peter Orr lectures in New Testament at Melbourne School of Theology in Melbourne, Australia. His PhD dissertation is Christ Absent and Present: A Study in Pauline Christology (Durham University, 2011).