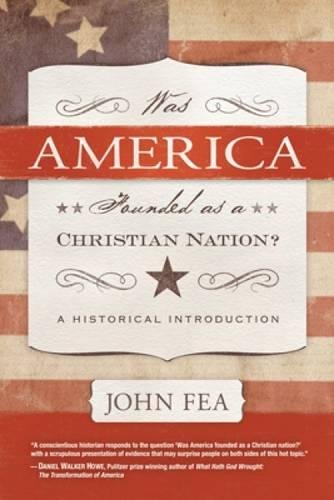 Was America Founded as a Christian Nation? A Historical Introduction

In Was America Founded as a Christian Nation, John Fea presents a thorough historical treatment of the relationship between Christianity’s doctrine and practice and the history of the American founding. His purpose in writing is not to give a definitive affirmative or negative answer to the question in the book’s title but to set the question in historical context. Fea writes this book as an historian, and he attempts to encourage his audience to think historically about the issue of Christianity and the American founding. Rather than mining American history for nuggets that add worth to prior commitments, Fea seeks to persuade readers that studying history demands intellectual humility that allows answers to questions to be more complex than we sometimes want them to be.

Before addressing the issue of Christianity and the American founding, Fea clearly lays out the aspects of historical thinking in terms of five C’s: change over time, context, causality, contingency, and complexity (pp. xxiv–xxv). Fea asserts at the outset of the book, “We need to practice history not because it can win us political points or help us push our social and cultural agendas forward, but because it has the amazing potential to transform our lives” (p. xxvii). Fea’s establishing the importance of historical thinking and his defining the tasks of the historian prior to addressing the topic at hand is a helpful and winsome way to set up the book. It also gives the reader the assurance that this book does not represent yet another socio-political axe to grind but honestly attempts to come to grips with an issue that is significant in terms of the identity of the American nation.

Fea divides the book into three parts. The first contains four chapters presenting a history of the idea of America as a Christian nation. The idea is certainly not a new one. Fea traces manifestations of the Christian America thesis as far back as 1789 with the drafting of the Constitution. Throughout the nineteenth and well into the twentieth century, the Christian America thesis was articulated in a variety of ways, some of them quite sophisticated. Fea acknowledges, consistent with Mark Noll’s work The Civil War as a Theological Crisis (University of North Carolina Press, 2006), that in many ways the war of 1860–1865 was a conflict over what kind of Christian nation (or nations, according to the point of view) would exist on the North American continent. Furthermore, proponents of Christian America were organized sufficiently to move for an amendment to the Constitution that would define America as a Christian nation. This effort was sustained over several decades in the latter part of the nineteenth century and into the 1920s. Whereas the Christian America thesis would be sidelined after the Scopes Trial of 1925, it would find new life in the 1970s, and it continues to be a burning issue today. Those who now argue that America was founded as a Christian nation inherit a long and consistent tradition.

Still, Fea argues in the second part of the work that the American Revolution was based far more upon a foundation of radical Whig ideology than on reasoned Christian theology or exegesis. Fea examines the events leading up to the Revolution, revolutionary sermons, the Declaration of Independence, the move toward religious freedom, and the text of the Constitution in this section. He finds that biblical Christianity was certainly not absent from the revolutionary and founding ideas, but that it was often obscured or overshadowed by radical Whig ideology or simple pragmatism. Arguments that the American Revolution and founding were distinctly Christian are too simplistic to measure up to the historical realities.

Fea concludes the work by examining a sampling of founders and their religious beliefs. Often we are told that the “founders” were devout Christians or that they were deists, secularists, etc. The “founders” are often cast in monolithic terms. Fea sets out to argue that the “founders” should not be classified as one entity; they each had their own individual religious commitments. Furthermore, arguing that the founders’ religious commitments accurately reflected their positions on the role of Christianity in the state is a non sequitur. Washington’s religious beliefs are too ambiguous to definitively classify him. Jefferson, Franklin, and John Adams each led lives that in some ways were consistent with Christianity, but all three rejected key tenets of Christian orthodoxy. Still, Witherspoon, Jay, and Samuel Adams affirmed Christian orthodoxy and represent believing Christians in the group that contributed to the founding of the American nation.

Fea concludes his work by affirming again what he says at the beginning of the book: answering the question of whether or not America was founded as a Christian nation is not so simple. What students of history can affirm is that religion has always enjoyed a special place in American society, not just since the founding but since the planting of the colonies. We can also see clearly the importance of religious freedom in the American founding, a commitment that springs from the historically American attitude toward the uniqueness and significance of religion. Christianity has had an enormous impact on the development of the American identity, but secular ideas have been particularly formative as well. America is indebted to a mixed heritage, which makes on contemporary students of American origins a demand of sober, responsible, and humble historical thinking.