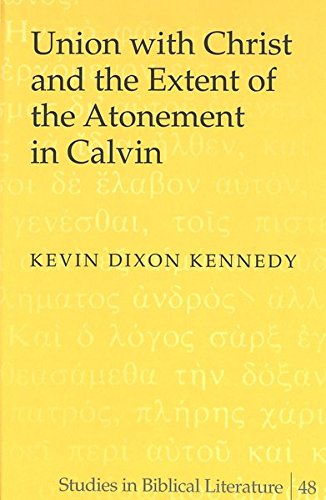 UNION WITH CHRIST AND THE EXTENT OF THE ATONEMENT IN CALVIN

The key elements to his central claim about Calvin’s doctrine of the atonement are as follows. First, Christ died for all humanity:

Christ died as the substitute for all sins. Yet, as long as I am separated from him by my unbelief, he is not mysubstitute. Only when I am engrafted onto him do I come to share in his death on the cross and the life that abides intrinsically in him (137).

Second, Christ’s work on the cross is not the mechanism by which some are elected and some reprobate. Union with Christ is. It is faith that separates the elect and reprobate, not the cross. Faith, says Kennedy, enables a believer to know the benefits of Christ who has already died for them.

This thesis has several strengths. First, it holds together the tensions between apparently universalistic and particularist passages on the atonement in Calvin’s work. Second, it seeks to do justice to these tensions in Calvin, rather than ironing them out. Third it rightly places emphasis for regeneration and sanctification in union with Christ as a key aspect to appropriating salvation in Calvin’s thought.

However, there are a number of serious concerns with this view. First, it seems historically naïve. Are we to believe that no-one has noticed this in Calvin before? Have generations of Calvinists simply failed to see the truth about what Calvin actually taught in this matter? Although this is not impossible, is it surely monumentally improbable.

Second, the underlying commitment to a ‘Calvin versus Calvinists’ thesis has been largely discredited in recent scholarship by the likes of Carl Trueman and Richard Muller. The significant continuities between Calvin, his immediate successors and doctrinal Orthodoxy are well known, but not taken account of here. If Kennedy’s thesis is true, then the Calvinist tradition is guilty of fundamentally misunderstanding and misrepresenting central issues in Calvin’s soteriology.

Third, and most damaging, is that Kennedy does not show how the atonement can be both universal and substitutionary. His reading of Calvin yields an atonement that atones for everyone, but is only appropriated by those who believe. Christ dies for all humanity potentially (offering salvation to all who trust in him), but not, it seems, actually (not all are saved by Christ’s death). Kennedy says, ‘[p]ayment for sins existed in Christ before we believed, but it did not exist for us until we were made one with Christ’ (6).

But if Christ’s death is both universal in scope and substitutionary in nature, then either all humanity are actually saved by Christ’s death, or no-one is actually saved by Christ’s death. Kennedy appears to think Calvin believed that latter, denying the effectual nature of the atonement. Christ’s death is, therefore, universal in scope, but not in effectiveness. But, he claims, it is truly substitutionary in nature. This is rather unclear. For a start, it is not clear what it means to claim that Christ is a true, but only potentially effective substitute for a sinner. Either Christ is a substitute who takes to himself the sins of others, or he does not. He cannot act as a substitute for me if his substitution is not effective for me. A substitute has to stand in place of someone in order to qualify as a substitute, surely. One who has potentially, but not effectively taken your place seems like no true substitute at all.

If Calvin failed to apprehend this, then there is a significant lacuna in his theology that has gone unnoticed for nearly five centuries. If, however, Calvin did not believe this, then Kennedy’s central contention is false. Unfortunately, Kennedy has not convinced this reader that the latter thesis is any less likely than when I began to read his book.