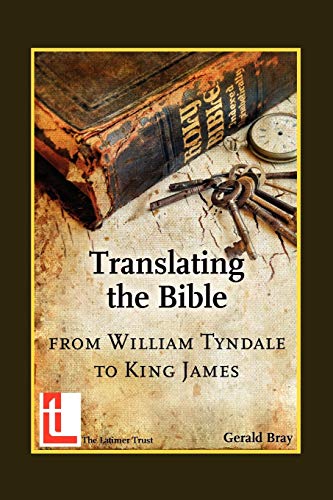 Translating the Bible: From William Tyndale to King James

Five hundred years ago you could have gone into a bookshop in England and bought a range of books on different subjects that catered to the interest and tastes of a growing reading public. . . . But there was one potential best seller that you could not have bought anywhere-a Bible . . . [with the result that] although there was a general familiarity with these great Biblical themes, few people knew what the Bible really said and almost nobody could have questioned the official teaching of the church by comparing it with the source material from which it was supposed to be drawn. (p. 1)

With this opening paragraph Gerald Bray begins the history-altering tale of the publication of the Bible in English. This book, like several others in the last year or so, was spurred by the four hundredth anniversary of the King James Version. This flurry of publications is valuable in reminding us of the immense blessing that is ours in having ready, indeed easy, access to the word of God in our own language.

Though the title and book cover might suggest that this is a book-length treatment written by Gerald Bray, this book is actually a collection of the prefaces of the main translations of the Bible into English from 1525 to 1611 with an introductory essay by Bray. As such a collection, this book is distinct from the many other volumes produced for the four hundredth anniversary of the KJV.

The introductory essay, in Bray's characteristic clarity and breadth of knowledge, summarizes the history of English Bible translation, focusing upon the work on and character of the key English translations: Tyndale's, The Great Bible, Geneva Bible, Bishops' Bible, Douai-Reims Bible (Roman Catholic), and the King James Bible. Bray also helpfully notes how the missionary character of the early church led almost immediately to vernacular translations of the Bible around the known world. He also mentions that vernacular translation continued to flourish in parts of Eastern Europe because they had been evangelized by the “eastern church, which had preserved the translation principle, and not by the western church, based on Rome, which preferred to keep everything in Latin” (p. 3). This summary essay is, of course, more brief than what can be found in other sources, but this makes it a handy quick-reference.

The bulk of the book is the text of the prefaces to these translations (sometimes prefaces to more than one edition) with the text slightly updated for ease of reading. Having a readable version of all these prefaces in one place makes this a valuable historical resource. These prefaces are not mere one-to-two-page acknowledgements. Rather, they are often lengthy (fifteen to twenty pages is common), engaged arguments for the propriety of translation, proper translation method, and doctrinal treatises.

For example, the preface to the KJV, which is often left out of copies today, runs to twenty-five pages in this printing and tackles these subjects among others: propriety of vernacular translation, defense of continuing translation, defense of using the Hebrew text of the OT over the Septuagint, and some discussion of translation theory. It is a remarkable piece of literature in itself. The breadth of learning, from church fathers to classical authors, is striking. Passing allusions are made to biblical references that would be considered obscure today (not to mention passing references to classical authors and themes that the “general reader” was expected to catch). Reading this essay would be a good cure for what C. S. Lewis called “chronological snobbery.” There is also a strong evangelical, and even devotional, strain in this preface. In strong and beautiful language, it extols the Scriptures and urges the reader to give serious effort to reading and studying them.

If we be ignorant, they will instruct us; if out of the way, they will bring us home; if out of order, they will reform us; if in heaviness, comfort us; if dull quicken us; if cold inflame us. . . . The Scripture then being acknowledged to be so full and so perfect, how can we excuse ourselves of negligence, if we do not study them, of curiosity, if we be not content with them? (pp. 208-9)

This is a useful volume for acquainting oneself with the primary documents in the history of English Bible translation. It will be of academic use to those working in church history and theology and devotional use to any Christian. These prefaces are also significant in the current discussion of translation theory as they demonstrate a carefully thought-out approach to that topic.