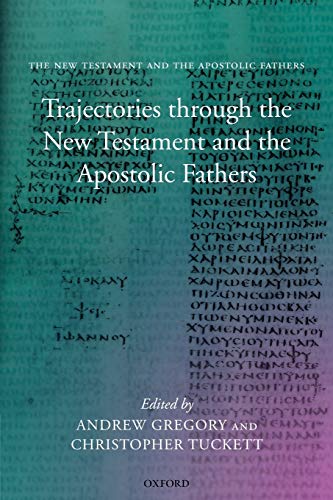 Trajectories through the New Testament and the Apostolic Fathers

Trajectories through the New Testament and the Apostolic Fathers (henceforth, Trajectories) is the second volume printed in commemoration of the 1905 publication by the Oxford Society of Historical Theology entitled The New Testament in the Apostolic Fathers. One hundred years later Andrew Gregory and Christopher Tuckett have edited a series of essays in two volumes in commemoration of the publication of the landmark work. These two volumes “are intended to update, develop, and widen the scope of the issues” considered in the book published in 1905 (p. v).

Like its companion volume, The Reception of the New Testament in the Apostolic Fathers, Trajectories is important for all those who are interested in Christian origins. While many within today’s church think of Christianity in terms of the NT alone, the documents that follow the NT, known as the Apostolic Fathers, have much to tell about beginning indicators for a NT canon, NT background, early Christian history, what Christian beliefs became prominent, and how Christian beliefs were transmitted in the church.

Trajectories is concerned with a sampling of ideas and issues that arise when these two bodies of literature are compared. While it is sensitive to citations and allusions from the NT, issues of verbal agreement are the concern of its companion volume. Trajectories is interested in examining thematic relationships. This is a necessary and important addition to the comparison between the NT and the Apostolic Fathers since thematic agreement is not necessarily found by the examination of verbal indicators.

While the series of essays is not meant to be comprehensive, it would be of help if the sections of this volume were more balanced. Considering that First Clement is one of the most important books of the Apostolic Fathers, a section devoted to this epistle would be helpful. A second or third essay within the section concerning Paul and the Apostolic Fathers would also bring this section into better proportion with the surrounding sections.

The essays within Trajectories are generally above the undergraduate student or pastor. Several essays present new material on the Didache and its relation to the Gospel of Matthew and the Epistle of James. Two essays consider the relationship between Polycarp’s Letter to the Philippians and the Epistle to the Philippians. Two essays open up the relationship between the Martyrdom of Polycarp and the NT. Generally, such topics are above the concerns of church life, but they will be of interest for those who are pursuing a deeper knowledge of the Apostolic Fathers or graduate study.

What would be beneficial for the pastor or undergraduate student is to have the fruits of some of this volume popularized for the church. One article that would be helpful for a popular audience is Thomas Weinandy’s article concerning “The Apostolic Christology of Ignatius of Antioch: The Road to Chalcedon.” This article finds Ignatius’ view of Christ as a forerunner to the council of Chalcedon’s decisions in a.d. 451. Because of popular books like Dan Brown’s Da Vinci Code and other publications, some within the church are being led to doubt that Christ’s divinity was proclaimed early within the Christian church. Weinandy presents passages from Ignatius’ seven letters that illustrate the divinity and humanity of Jesus Christ and that these two are in unity. Weinandy concludes that Ignatius’ viewpoint of Jesus as Christ is the “first step along the road that leads to Chalcedon” (p. 73). When some have been popularizing the idea that Christ’s deity was in doubt or decided late in the fifth century by power figures within the church, it would be helpful to have an article like Weinandy’s popularized that clearly depicts a martyred Christian’s opinion in the second century in agreement with the Council of Chalcedon.

Readers of Trajectories should not expect that the methodology in each essay will always be friendly to those from an evangelical background. David Reis’s article “Following in Paul’s footsteps: Mimēsis and Power in Ignatius” carries an anti-authoritarian bias. Reis suggests that Paul and Ignatius both use imitation language as a rhetoric of coercion. While Reis rightly recognizes a similarity between Paul and Ignatius, his article unfortunately neglects the hardship and sacrifice that Paul and Ignatius endured for their message.