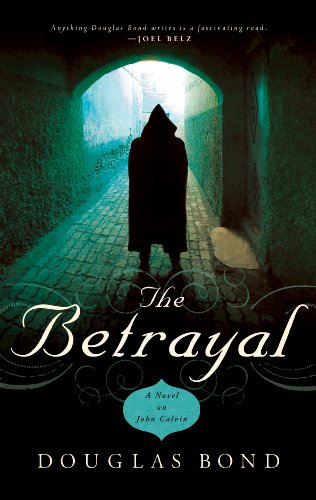 The Betrayal: A Novel on John Calvin

The Betrayal is historical fiction creatively written in the first-person from the perspective of John Calvin’s assistant, Jean-Louis. The author, Douglas Bond, heads the English department at Covenant High School in Tacoma, Washington. The novel seems pitched at about the teen-level, although the language includes a mix of archaic words and syntax. It offers a faithful and memorable overview of Calvin’s life, and one could profitably read it without any prior knowledge of Calvin. It is easy for people today to forget that Calvin lived in a tumultuous, dangerous context in which politics and theology were intertwined, and The Betrayal portrays this vividly.

One could quibble with the plot, which disproportionately focuses on Calvin’s early years with the result that it rushes through his later years. For example, it describes the plague in Calvin’s town (earlier in his life) in meticulous detail, but it flies through some of the most significant events in Calvin’s later life, such as his marriage and some later theological controversies. The plot and characters are almost over-developed at the beginning, but they become under-developed by the end, which seems rushed. The reader has virtually no emotional attachment, for example, to Calvin’s wife when she dies. Further, the title of the book does not capture its essence. “Betrayal” is misleading because (spoiler warning!) it does not apply to the last 150 pages. The “betrayal” climax and the plotline’s intrigue and creativity begin to wane after page 234.

The novel is filled with insights into Calvin’s life that will enhance anyone’s understanding of the man and his times. It is a welcome tribute to him in the year of his 500th birthday.