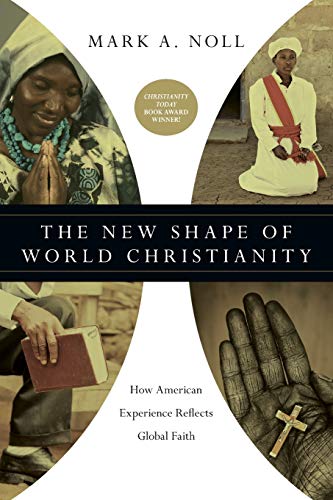 Written by Mark A. Noll Reviewed By Mark Rogers
History and Historical Theology

In the first part of the book, Noll sets the context by providing a brief sketch of the present shape of world Christianity. He uses a series of statistics to illustrate that a majority of Christians now live in South America, Africa, and Asia. For example, more Christians attended church last Sunday in China than in all of “Christian Europe.” After briefly looking at the present state of the church, Noll traces the transition of evangelical Christianity into world Christianity during the nineteenth century. Between 1800 and 1914, the percentage of Christians in the world rose from 23 to 35 percent as Western missionaries brought Christianity to many places where it had not existed before. Noll uses this “prehistory” to set up some of the challenges and questions faced by world Christianity today.

Instead, Noll argues that the primary reason for similarities between American evangelicalism and world Christianity stem from a shared historical experience. Evangelical movements began as renewal movements within European state-church Protestantism in the eighteenth century. The state-church system in the United States gave way to a purely voluntary system in the nineteenth century. At the same time, evangelicals in America also experienced vast new territories and populations that were free of traditional institutions and hierarchical authority. Conversionistic and voluntaristic evangelicalism enjoyed remarkable growth and success as it adjusted to, and was shaped by, the fluid, rapidly changing, and ethnically pluralistic culture of nineteenth-century America. Noll claims that forms of Christianity similar to American evangelicalism are becoming so widespread in the world because Christianity is advancing mainly among societies “where something like nineteenth-century American social conditions have come to prevail—where, that is, social fluidity, personal choice, the need for innovation and a search for anchorage in the face of vanishing traditions have prevailed” (p. 116).

Americans became a majority of the global missionary force after World War II, and non-denominational, evangelical, and Pentecostal believers came to dominate the American missionary force by the end of the twentieth century. Noll describes this missionary force and traces some direct influence it had. However, he argues that American missionary efforts have been successful, mostly because the “conversionist, voluntarist, entrepreneurial and nondenominational” forms of Christianity reflected by American missionaries “possess an affinity with the rapidly changing economic, demographic, social and cultural character of the world itself” (p. 91). Less traditional and non-hierarchical forms of Christianity have encouraged new believers to run with the gospel and develop local Christianities, which are well suited to influence their culture and spread rapidly.

The third part of the book is comprised of three case studies that describe and draw lessons from interactions between American Christianity and world Christianity. In a mainly descriptive chapter, Noll tracks the evolving awareness of global Christianity among American evangelicals by looking at evangelical periodicals throughout the twentieth century. Noll also examines Korean Christianity and the East African revival that began in the 1930s. He notes that Americans did influence both Korean and East African Christianity, but he also supports his thesis by demonstrating the manner in which cultural forces experienced in America have also shaped the Christianity of these other regions. For example, the instability brought on by wars in Korea parallel similar formative factors in the American religious experience.

One of the strengths of this book is Noll’s repeated assertion and documentation that “the primary agency in recent movements of Christianization has not been the missionaries but the new converts themselves” (p. 106). However, Noll’s decision not to interact with American mission strategy is a weakness. He does note that non-traditional forms of Christianity promoted by evangelical missionaries have given local Christianities the freedom to develop. But he fails to mention that many evangelical missionaries in the past seventy-five years have believed that local believers are more effective in reaching their own culture than are cross-cultural missionaries. This belief led many American missionaries to develop strategies focused on training local leadership to evangelize and start indigenous churches. What Noll describes as the historical pattern in world Christian movements was the explicit strategy of many, if not most, American missionaries. These developments in American missiology may have been just as significant as the sociological factors Noll emphasizes and should be carefully considered.

The New Shape of World Christianity is a helpful introduction to the study of world Christianity. In addition to his new interpretations, Noll has also outlined the new shape of world Christianity and provides a “Guide to Further Reading” for those interested in reading more deeply on any aspect of the global church. Noll’s mix of interpretive insight and survey information makes this both an important book for church historians and a helpful book for Christians wanting to grow in their knowledge of the worldwide body of Christ.