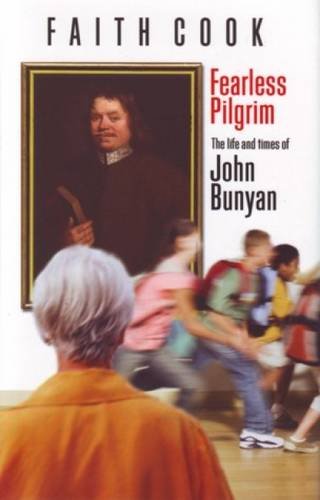 Fearless Pilgrim: The Life and Times of John Bunyan

Fearless Pilgrim: The Life and Times of John Bunyan is Faith Cook’s contribution to the ever-growing list of John Bunyan biographies. The author, who is clearly sympathetic with Bunyan’s theology and deeply admires her subject, presents Bunyan’s life, ministry, and works within the context of the tumultuous period of English history through which he lived. The first three hundred pages of this volume (roughly two-thirds of the book) recount Bunyan’s life up to his release from his major imprisonment (1672). The author relies heavily on Grace Abounding to the Chief of Sinners, Bunyan’s own autobiography, but she does more than merely relate the facts of the aforementioned work; she fills in the details of Bunyan’s life that are simply passed over in Grace Abounding. In so doing, Cook provides the reader with a full, historically sensitive narrative of the first forty-four years of Bunyan’s life. The rest of the work focuses on the major events and publications of Bunyan’s post-imprisonment ministry as an author and the pastor of the Bedford Independent Congregation. This section includes chapters on Bunyan’s part in the communion controversy, the circumstances of his second imprisonment, and chapters specifically dedicated to The Pilgrims Progress and The Holy War. Cook also provides a detailed bibliography and four appendices for further study. The first appendix briefly recounts the build-up to the Civil War; the second is John Gifford’s letter to his church before his death; the third is John Bunyan’s Deed of Gift to his second wife; and the fourth lists Bunyan’s works in the order he wrote them.

Though it is probably best to read Fearless Pilgrim as an introductory or devotional biography, Cook’s work makes a number of worthy contributions to Bunyan studies. The author’s presentation of Bunyan’s historical context is arguably the work’s greatest contribution. For example, her description of the English Civil Wars and Bunyan’s role in them is superb. The narrative abounds with details about troop movements, payment schedules, and even theological currents that moved throughout the Parliamentary Army. Most chapters begin with historical and contextual data, and thus the author’s presentation of Bunyan’s life is fixed firmly within history, not apart from it.

Cook’s biography also deserves praise for its perspective. The author’s theological sympathy and profound appreciation for John Bunyan is a plus. In a commentary on John Bunyan’s magnum opus, The Pilgrim’s Progress, Barry Horner lamented that much of the work done on Bunyan in recent decades has been done by those who were unsympathetic with his presuppositions and antagonistic to his biblical worldview. Because of this, Bunyan’s spiritual struggles as outlined in Grace Abounding, for example, are often dismissed as either a neuroses created by the hard logic of Bunyan’s high Calvinism or evidence of a mental disorder. Cook’s appreciation for Bunyan’s theological outlook, however, gives her a perspective on Bunyan’s conversion, quest for assurance, and experimental piety that few who do not share Bunyan’s presuppositions would be able to achieve. In this respect her work is a needed corrective to some of the biases of contemporary Bunyan scholarship.

Unfortunately, at times the author’s deep appreciation for Bunyan becomes hagiographic. For example, in discussing possible literary models and source material for Bunyan’s Holy War, Cook states, “But despite these possible sources, John Bunyan, like a mighty eagle, sores above all lesser authors. Each of his books bears the characteristics of his own unmistakable genius” (p. 377). Though sentences such as these are rare, they tend to damage the author’s arguments and weaken the author’s overall presentation.

Despite the hagiographic elements, Fearless Pilgrim: The Life and Times of John Bunyan is a biography that is sure to be enjoyed by fans of John Bunyan and The Pilgrim’s Progress. Not only is this work a good introduction to John Bunyan’s life and times, it provides a needed corrective to some of the biases of contemporary Bunyan scholarship. Cook provides the reader with a full narrative that is firmly rooted in the turbulent times in which he lived. Furthermore, the author allows Bunyan to interpret his own spiritual pilgrimage from doubt to assurance rather than attempt to analyze Bunyan’s psyche from afar. Faith Cook’s warm and winsome biography of John Bunyan is a welcome addition to the evergrowing list of John Bunyan biographies.