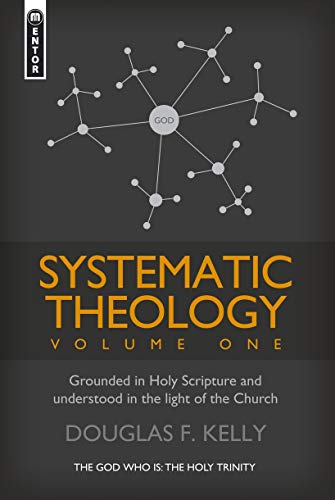 Systematic Theology, Volume One: Grounded in Holy Scripture and Understood in Light of the Church (The God Who Is: The Holy Trinity)

The last ten years have seen numerous projects in Reformed theology, including brilliant new editions and translations of older works, and several new systematic projects. Douglas Kelly, Richard Jordan Professor of Theology at Reformed Theological Seminary (Charlotte), has offered one of the most recent contributions with this inaugural installment of a proposed three-volume work. While introducing this volume’s agenda, Kelly locates himself within the sixteenth-century Scottish Presbyterian self-understanding as “Catholic” and “Reformed.” Establishing that God’s revelation occurs within the covenant community, he draws from the “rich resources from a wide array of … traditions” in his approach to theology (pp. 9–11).

Chapter 1 answers questions about how, where, and to whom God reveals himself, with an appendix on traditional arguments for God’s existence (Anselm, Aquinas, Scotus) and another on Thomas Reid’s response to Hume on cause and effect as first principle. Chapter 2 provides an exposé through ways the church understood natural revelation and a history of religions, providing the context for God’s personal revelation. One appendix follows giving depictions of other religions from the biblical and patristic witnesses, whereas another offers ground for the “tentative” possibility of salvation for those who never heard the gospel and are outside the covenant community. Yet Kelly does not minimize the Word and Spirit-endowed community’s task of proclaiming the gospel to all. The theme of unbelief continues in chapter 3 via “the Enlightenment” (located from 1650), which began a trend of Western rejection of Christianity. The appendix contains a selection from Dostoevsky’s Demons, creatively highlighting the Enlightenment’s meaning and impact.

A shift towards the doctrine of God takes place in chapter 4, depending markedly on Richard of St. Victor and Stăniloae, and on the church’s understanding of the divine name, displaying God’s eternal existence as three co-equal loving persons. The appendix of chapter 4 discusses the distinction between God’s essence and energies in Palamas, how this prompted Western distinctions between God’s essence and attributes, and how the West responded to deification. Chapter 5 considers God’s transcendence, beauty, majesty and sovereign control contra Moltmann’s God who “needs the world” (p. 322). Three appendices give accounts challenging the view of God’s transcendent “Lordship,” including evolution, Open Theism, the Jesus Seminar’s Deism, Gnosticism (ancient and modern), and feminism’s challenges to biblical descriptions of God.

That God relates to his people through “covenant” is detailed in chapter 6, as is the church’s notion of regula fidei in Irenaeus and other patristic writers. The NPP is also briefly treated here (pp. 412–17). An appendix then produces the abstract of Ligon Duncan’s PhD dissertation on “covenant” in the Ante-Nicene fathers. Chapter 7 treats God’s existence as three persons, with appendices on Augustine’s trinitarian analogies and Gaussen’s interpretations of OT theophanies as Christophanies. Chapter 8 shows where theologians have engaged descriptions of God’s oneness and threeness, with an appendix on divergences between Augustine and the Cappadocians. Chapter 9 then asserts full co-equality between trinitarian persons, with a final appendix on the filioque, beckoning toward an Eastward move by the West that could “constitute healing for the entire Church” (p. 577).

Overall, Kelly provides a helpful approach to theology. He delivers by grounding theology in Scripture (within a covenantal framework), avoiding the proof-text method of theologians who play careless with the Bible. He draws deeply from the very best of (early) church history, bringing many source-texts together to address issues, building a helpful treasure-trove of historical theology. Consequently, it is sometimes difficult to know what Kelly believes. He is less-concerned with contemporary research into the historical figures and sometimes employs anachronisms. And yet this is part of the attempt to recover a Patristic heritage that he laments was lost through the secular Enlightenment (pp. 309–10).

Little interaction exists with contemporary culture and developments in today’s academy. Kelly does theology in and for the church with ecumenical interests. For good or ill, theologies like this could have a unifying effect on the church in the world. Here the influence of Thomas Torrance (Kelly’s doctorvater) is clear. Oddly, Kelly leaves out interaction with numerous contemporary reformed theologians (Reymond, Frame, McCormack, etc.), although he is ably conversant with twentieth-century theology in its wideness (with a few qualifications—e.g., relegating LaCugna to feminist developments rather than genuine contributions to recent trinitarian thought). It will be interesting to see Kelly work Catholicity into forthcoming ecclesial engagement in the rest of this Systematic Theology. Interaction with the Vatican is missing thus far, including how Reformed people should relate to ecumenical creeds.

An introduction to the series (aim and scope), methodological commitments, and the relationship to other recent Reformed works would have been helpful. Perhaps this shows Kelly’s method as consonant with how theology has been formulated historically while seeking his own revelationally-based, ecclesially-based contribution. Accordingly, he is more prone to describe his angles than his distinct agenda. And yet, Kelly performs the job of a skilled teacher—taking the reader on a journey exploring categories in the manner theology ought to be conceived (p. 13). Notwithstanding some criticisms (e.g., formatting) that one hopes will be smoothed out in subsequent editions of this volume, and in the series as a whole, this initial work displays incredible depth and breadth, evincing that this entire set, upon completion, will be a great addition to the robust engagement from the broader reformed tradition.