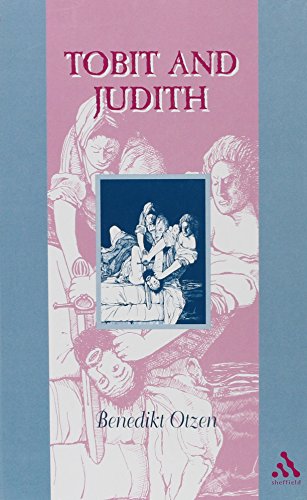 Benedikt Otzen’s contribution to Tobit and Judith research is a welcome addition to the Sheffield Guide to Apocrypha and Pseudepigrapha series. One hallmark of this series has been the introduction of ancient Jewish literature in conjunction with new approaches and considerations. This volume continues that tradition and thereby guarantees itself a lasting place on many bookshelves.

In the preface Otzen commends the inclusion of these two apocryphal legends into a single introductory volume due to their similar genre classification. His awareness, however, of how dissimilar they are in content leads him to treat each differently.

The book of Tobit is examined from the standpoint of a fairytale that has, overtime, morphed into a Jewish legend. By extricating the elements in Tobit that have conspicuous resemblance to commonly known folktales, Otzen demonstrates how the book moved from fairytale to an edifying legend latent with Jewish values from late antiquity (16). Once the story’s format has been established, important motifs are scrutinised especially in the context of readers living in the Jewish Diaspora. This is followed by considerations of the book’s genre, textual history, canonical status and possible authorship. The insight Otzen gives readers into the possible conflict between and synthesis of Jewish and pagan elements in Tobit is particularly helpful.

The book of Judith is examined from the standpoint of ‘rescue-stories’ about heroic females that find their origins in comparable OT stories (74). In a section on possible sources, Otzen demonstrates the numerous allusions to OT events and figures that certainly influenced the author of Judith. A treatment of the many historical and topographical problems in Judith that have not only plagued scholars seeking to untangle them, but also probably helped contribute to the books non-canonical status is included. This is followed by a consideration of important motifs, which, like Tobit, would have provided inspiration for Jewish readers in late antiquity. In addition to considerations of genre, textual history and authorship, there is a section on interpretive approaches. Judith has received much attention recently from feminist and narrative critics alike and Otzen’s overview, while necessarily brief, provides an excellent introduction to the way modern scholarship has begun to reconsider Judith in the context of the ancient world.

The overall strength of this volume is the way Otzen has distilled a vast amount of scholarly research in a simple, clear, and readable format. Otzen notes that his contribution gives more consideration to Forschungsgeschichte (history of research) than other volumes in this series (vii). While this is may be the case, it does, not present readers with any additional hurdles Otzen interacts with other scholars but avoids belabouring any issues to the point of fatigue in order to make his point. At the end of each chapter is a short list of suggested works for further reading. A current bibliography and set of indexes complements the volume. In the preface Otzen notes a few works which were either not available to him or only appeared late. It is, however, difficult to imagine that these would have introduced any major changes to his approach and full bibliographic details of the missed works are given for those who wish to benefit from them. This is a book that will appeal mainly to scholars and students, but interested laypersons will certainly benefit and find that Otzen’s engaging style prevents them from being excluded. Highly recommended.