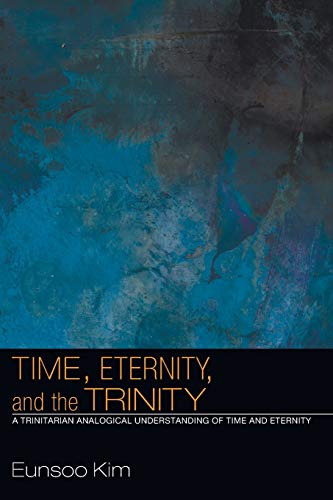 Time, Eternity, and the Trinity: A Trinitarian Analogical Understanding of Time and Eternity

In the past few decades, the nature of God's eternality has sparked intense discussion and debate. Is God timeless or temporal? Logically speaking, these are the only two options since they are logically contradictory: God is either temporal or atemporal. Various authors have attempted to offer a third way between these two positions, but none have succeeded because there is no such thing as a third way between two logically contradictory positions. The present volume is another attempt at developing a third way.

Kim's book has several noteworthy virtues. First, it is clearly written. Second, Kim has familiarized himself with the philosophy of time. There is a tendency (sometimes intentionally and sometimes not) within systematic theology to stay away from the philosophy of time. It was refreshing to see Kim engage this field of study. Third, Kim nicely summarizes the biblical, historical, and contemporary philosophical issues surrounding the debate over God and time.

Another aspect of Kim's thesis is to solve the debate between timeless and temporal views of God by getting beyond these two “extremes.” The way forward is to offer an analogical Trinitarian understanding of time and eternity. Before doing this, however, Kim sets out to do a few things: (1) offer a biblical view of time and eternity; (2) critique contemporary divine temporalism; and (3) discuss Karl Barth's and Hans Urs von Balthasar's views on God and time.

Kim's chapter on the biblical understanding of time and eternity occurs before his chapter on the philosophy of time. As evangelicals we want to start with the Bible, but this methodology can sometimes be problematic. This is because the questions that we ask are not always the questions that the biblical authors seek to address. As such, it can be difficult to draw inferences from Scripture without inserting our own views into the text. When it comes to the nature of time, the Bible gives us very little to work with. The best that we can say as theologians is that there are multiple philosophical theories on the nature of time, and from there we can debate which ones are compatible with Scripture. Kim, like many others, claims that the biblical view is that God created time with creation. Time came into existence when God created the heavens and the earth. This is an untenable position for at least two reasons. First, in order for the Bible to teach that time is created, it would need to tell us what time is either directly or indirectly. Is time relational, absolute, or substantival? The Bible never addresses this metaphysical question. There simply is no such thing as the biblical view of time since the Bible neither explicitly nor implicitly teaches what time is. Second, apart from the metaphysical question 'What is time?' the Bible would then need to teach either explicitly or implicitly that time began to exist. This is something that the Bible does not do. The Bible is quite comfortable talking about time before creation. For instance, Ps 90 describes God as existing from perpetual duration in the indefinite past before creation.

He has two main criticisms of temporalism: (i) it entails panentheism, and (ii) it cannot account for the infinite qualitative difference between time and eternity. In regards to (i) it seems odd to say the views of thinkers like Wolterstorff, Padgett, W. L. Craig, and R. Swinburne entail panentheism. The only justification Kim gives for this is that temporalists hold that the world's time is in God's eternity. If this necessarily entails panentheism, then Pseudo-Dionysius, Augustine, Anselm, Peter Lombard, and many other classical theists are panentheists, for they all hold that time is contained in God's eternity. In regards to (ii), Kim's statements are sparse and at times vague, but I gather the difference has something to do with the fact that God is life and contingent creatures tend towards death apart from God's grace. If this is the infinite qualitative difference between time and eternity, then all of the divine temporalists noted above have this built within their accounts. As such Kim's objection will need more content in order to succeed.

After expounding the views of Barth and Balthasar, Kim gets to the task of explicating his own views. Kim's account ultimately goes as follows: 'The Triune God's eternity is the source of created time. Prior to creation, God existed in a simultaneous state of affairs that lacked succession. Then, in the act of creation, God takes on temporal succession.' This struck me as odd since this is the account of God and time that has been masterfully articulated by Swinburne, Padgett, D. Zimmerman, and G. DeWeese. It appears that Kim has done something similar to what Barth and Balthasar have done. It seems as if he rejects divine temporalism and then affirms all that it holds. If this is the case, Kim has not offered a substantive third way between divine timelessness and divine temporality.