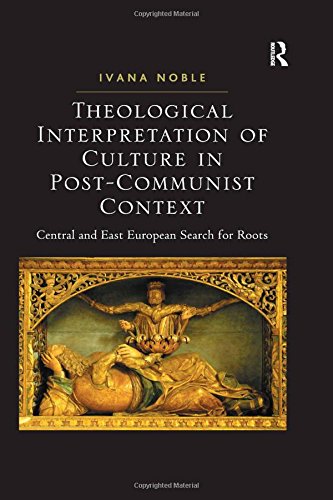 Ivana Noble is associate professor of Ecumenical Theology at the Protestant Theological Faculty of Charles University; she also teaches at the International Baptist Seminary as a Senior Research Fellow (Prague, Czech Republic). She is the former president of Societas Oecumenica and has authored Tracking God: Ecumenical Fundamental Theology (Wipf & Stock, 2010).

Noble uses the term “culture” in its etymological sense, emphasizing its cultivating role. Her discussion of the interplay between culture and theology is “that theology can uncover areas that would otherwise remain inaccessible to culture, as well as culture being able to stimulate theology to return to the forgotten depths of the ‘underground sources’ and ‘unknown streams’ of life opened by the keys of symbolic traditions” (pp. 11–12). Focusing on the communist context in which she was raised, Noble investigates the cultural arts through a Trinitarian grid exemplified by the World (creation), Memory (redemption), and Ultimate Fulfillment (deification). In her section on the World, Noble discusses literature from Karel Čapek and Isaac Bashevis Singer. For Memory, she examines the heritage of totalitarian cultures in the folk music of Vladimir Vysotsky and Jaromír Nohavica. Finally, Ultimate Fulfillment is explained via the Central European films of István Szabó and Vladimír Michálek. Since her artists are not Christian, the author explains her method: “These languages may not seem at first sight explicitly theological, and some degree of translation between them and the language of theology is needed” (p. viii). Depending on each artist’s Sitz im Leben, there are a range of biblical themes that Noble explains as roots or memories that have long been suppressed in the human psyche.

Foundational to Noble’s interpretation of culture is the Eastern Orthodox perspective. Concerning evil, it is

a negative activity in the perverted course of the world, weakening the world and thus making it vulnerable to natural catastrophes and illnesses, a human perversion affecting all relationships like an illness, as well as perverted spiritual forces operating within creation. . . . It is a parasitic state taking hold of personal beings and of the world, a state of having fallen away from God, which, however, does not ultimately represent a negative alternative to God. (p. 45n2)

Consequently, she stresses that people should be thought of as victims instead of responsible agents who know what they are doing (p. 124). Despite believing the first eleven chapters of Genesis are myth, Noble writes, “The estrangement from God, the loss of paradise and mortality, were not punishments of God, but consequences of the weakening of the spirit that gave way to disobedience, pride and all selfish appetites” (p. 60). Part of the fall is that the image of God is lost, requiring renewal. Although Noble misquotes Irenaeus supportively, for Noble the need for renewal leads to deification whereby society is guided by the Logos spermatikos, Who by perichoretic activity cultivates the earth through a creative process toward consummation with heaven, returning us to the image of God in the “circle of love” (pp. 119, 57). The death of Christ, then, is an act of renewal where Jesus identifies with humanity as victim, fills death with love and resurrects our race. The Spirit of love is then anonymously shed in the hearts of humanity because the Spirit’s work in the world also involves a kenosis. Noble explains, “The love of the Spirit says nothing about God, in order to be able to reach into the hearts of creatures for whom God has died” (p. 176). In the consummation, there is the possibility of God embracing all as an act of love. In a Trinitarian perspective, she writes, “Christ is the victor over violence in our world, not its ultimate victim. The Father is the giver of the victory, not the perpetrator of the sacrifice. The spirit makes the victory present, bringing eschatological fulfillment into human history” (p. 124).

Noble’s conclusions regarding the nature of God will be met with disapproval by most evangelicals. She writes, “In creating humankind with their freedom, God let go of omnipresence and omnipotence, as the fruits of human freedom could not be completely predicted” (p. 169). Also, fundamental to her interpretation of culture is a rejection of substitutionary atonement (pp. 124, 140, 165–66, 191–93). According to Noble, the “scandalous” western view of the atonement makes God a sacrificer, overemphasizes sin, and undermines the role of the Spirit” (p. 123). Noble also rejects the exclusivity of the Christian faith: “I do not want to argue that if our contemporaries do not share our explicit Trinitarian faith they cannot be filled with the Holy Spirit either” (p. 75). In short, “redemption happens through the recovery of a positive dialogue with God” (p. 125). In a context needing hope, Noble gives little consolation by expressing doubt that Europe will ever return to Christianity. As an alternative she suggests, “by embodying what we believe and hope for, by our own conversion, we can take others along, at least part of the way” (p. 201).

Although Noble cites limitations with her English ability, she writes with great depth. Every sentence is weighed for content and meaning. Being trained in the West, she shows great familiarity with western, non-evangelical thought and capably weaves various traditions together to express her convictions. Of particular interest is her tracing the memory of God in the variegated lives of those who live in a secular or post-secular world. While no significant contributions were made in Trinitarian studies, evangelicals that read this work will be challenged to think deeply about the contributions of Eastern Orthodoxy as well as non-evangelical perspectives on culture and human psychology. Yet, lack of adherence to fundamental evangelical doctrine is a significant weakness of the book. Consequently, while those specializing in cultural studies may find this volume helpful, as might others more conversant with engaging post-communist European culture, this is probably not the best book written on the issue for a general evangelical audience. Yet it provides a helpful tool for how evangelicals might begin to conduct their own engagement with post-communist societies from their more distinctly evangelical perspective.