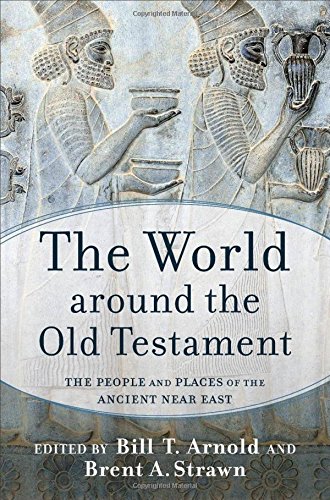 The World around the Old Testament: The People and Places of the Ancient Near East`

Edited by Bill T. Arnold (Paul S. Amos Professor of Old Testament Interpretation at Asbury Theological Seminary) and Brent A. Strawn (Professor of Old Testament at the Candler School of Theology, Emory University), this book is a superb new resource for understanding the different cultural groups of the ancient Near East. As explained by Arnold and Strawn, this book arose out of the need for an up-to-date survey of the regions and cultural groups that lived around ancient Israel (pp. xv–xvi). Accordingly, it is intended to replace earlier works on this topic, most notably D. J. Wiseman, ed., Peoples of Old Testament Times (Oxford: Clarendon, 1973) and Alfred J. Hoerth, Gerald L. Mattingly, and Edwin M. Yamauchi, eds., Peoples of the Old Testament World (Grand Rapids: Baker, 1994), which are now dated. The editors and contributors intend for The World around the Old Testament to be “as up-to-date as possible and at the same time user-friendly so as to maximize its utility whether in a classroom or a reading room” (p. xvi).

To this end, Arnold and Strawn have assembled a cast of top-notch contributors and have ensured that the book covers as much of the ancient Near East as possible. The World around the Old Testament includes thirteen essays spanning the basic cultural groups of the ancient Near East: the Amorites (Daniel E. Fleming); Assyrians (Christopher B. Hays and Peter Machinist); Babylonians (David S. Vanderhooft); Ugaritians (Mark S. Smith); Egyptians (Joel M. LeMon); Hittites and Hurrians (Billie Jean Collins); Arameans (K. Lawson Younger Jr.); Phoenicians (Christopher A. Rollston); Ammonites, Moabites, and Edomites (Joel S. Burnett); Philistines (Carl S. Ehrlich); Persians (Pierre Briant); Arabians (David F. Graf); and Greeks (Walter Burkert). Space limitations preclude a detailed analysis of each essay, so in the remainder of this review I will make several general observations regarding the book’s strengths and weaknesses, providing specific examples as necessary.

Each of the book’s essays aims to address several key topics, including political history (focused especially on the Late Bronze Age through the Persian period, ca. 1550–332 BCE), culture (e.g., society, religion, literature, art, and architecture), and discussion of how knowledge of the cultural group aids understanding of the Hebrew Bible. Naturally, the emphases of each essay depend on the cultural group discussed, and each contributor often writes according to his strengths (e.g., Smith spends much time discussing parallels between Ugaritic literature and the Hebrew Bible whereas Rollston focuses on the Phoenician language and Phoenician inscriptions). Yet, despite the diversity of topics and contributors, The World around the Old Testament constitutes a relatively even treatment of the ancient Near East with a fairly uniform approach.

This approach can be characterized by both breadth and depth. The book’s attention to political history, culture, and relevance for understanding the Hebrew Bible results in a broad swathe of information on the different cultural groups of the ancient Near East. Yet, these broad topics are addressed in a very thorough and informative manner, with significant attention to detail. The contributors engage well with current research and scholarly debates, as is evident from their nuanced discussion, interaction with various sources in the footnotes, and the “For Further Reading” bibliographies found at the end of each essay. The essays are very well-written too. The end product is a competent treatment of the details without loss of the bigger picture.

In terms of the cultural groups discussed, The World around the Old Testament has an impressive scope. It contains contributions on Arabia and Greece, two noteworthy cultural groups not covered in the book’s most immediate predecessor, Peoples of the Old Testament World. Nevertheless, some omissions are evident, perhaps due to the book’s focus on the Late Bronze Age onward. Some information on the Sumerians can be found scattered in the chapters on the Amorites, Assyrians, Babylonians, but the book lacks a chapter devoted to this significant cultural group. Another unfortunate omission is that, despite its title “The Hittites and the Hurrians” (emphasis added), Collins’s chapter actually has almost nothing to say about the Hurrians, a cultural group that primarily inhabited northern Mesopotamia but infiltrated Palestine during the latter half of the second millennium BCE.

Some readers of Themelios may be troubled by the occasional downplaying of the Hebrew Bible’s value as a historical source. For example, LeMon states in his brief discussion of the exodus that “there remain significant and seemingly intractable problems for locating the Egyptian sojourn historically” (p. 190), Ehrlich refers to many of the biblical narratives regarding the Philistines as “folktales” that “cannot be placed in any definite historical context” (p. 357), and Burkert says that “Ezra and Nehemiah are heavily reworked and sometimes contradictory, perhaps supplemented with inauthentic documents” (p. 487). The issues raised by these contributors are complex and cannot, nor should not, be solved in a simplistic manner. Yet, a more positive approach to the Hebrew Bible as a source might reap benefits for the purposes of historical reconstruction.

Despite these critiques, The World around the Old Testament is a remarkable collection of essays on the cultural groups of the ancient Near East. It covers much ground while paying close attention to detail and interacting well with current scholarship, thereby providing an up-to-date resource on the ancient Near Eastern world. Both scholars and students will profit greatly from reading this book, and I highly recommend it.