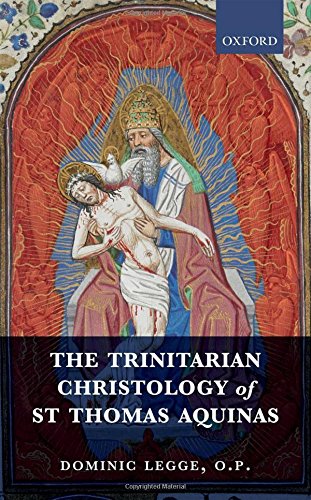 The Trinitarian Christology of Thomas Aquinas

For the past several decades, the question of how to relate the Holy Spirit to the incarnate Son has been a subject of varying interests across the disciplinary lines of biblical studies and dogmatics. The question has prompted answers that range from insightful to curious, and this is often related to the underlying conceptions of the Trinity operative (or not) in such inquiries. As often in questions of doctrine, we must know where the tradition has stood before venturing down unmarked paths. One virtue of such knowledge is that we come to understand there are precious few genuinely unmarked paths; typically the signs and footprints are already there, only hidden by overgrowth. Historical studies of such contested questions can prune these paths, and help us discern which are worth taking. Such is, in its own measure, Dominic Legge’s study of Aquinas’s Christology, which is a welcome contribution that offers limpid insight into its subject matter.

Legge undertakes a close reading of Aquinas’s mature Christology from within the horizon of his trinitarian theology, which frames all that Aquinas has to say about the economy. In the first two parts of the book, Legge clearly explains Aquinas’s doctrine of the missions of the Son and Spirit, and how trinitarian considerations bear upon the interpretation of the Son’s incarnation. Aquinas’s theory of the missions is essential to his understanding of the incarnation and the relation between Christ and the Holy Spirit. Generally, the mission of the Son or the Spirit includes both the person’s eternal procession and a created effect in time. The ‘created effect’ in question might be a range of things: the Son’s human nature, the appearance of a dove or tongues of fire, or the ‘created’ grace by which the divine persons inhabit the Christian. Thus, these created effects always refer some creature to the procession of the Son or the Spirit.

Missions fall into two types: visible and invisible. While the visible missions of the incarnation and Pentecost are central episodes in salvation history, and the Son’s mission is irreducibly unique, they are set alongside other visible missions like the Spirit’s descent upon Christ at his baptism and transfiguration, or the Spirit’s outpouring on Mary and the Apostles on the night of the resurrection. Each of these reveal something particular about the persons and the economy of grace, and in this respect, Legge’s discussion is helpful in laying bare how Aquinas’s trinitarian theology supports his Catholic ecclesiology (pp. 54–58). But despite the particularity of any given mission, they all point us back towards the eternal processions as their ground.

From these visible missions there follow invisible missions, in which the Son and Spirit are sent and active in creatures without any visible manifestation. Such invisible missions include the indwelling of believers by sanctifying grace, which resides in their soul as a created effect. This sanctifying or habitual grace conforms the soul to the likeness of the Trinity through the gifts of wisdom and charity, thereby corresponding to the processions of the Word and Love from the Father. In this active assimilation of the soul to the divine processions, the Son and Spirit are really present to the soul in grace, effecting its movement towards the Father. This is a very precise way of talking about believers’ communion with the Trinity, and it proves fruitful in accounting for the variety of ways the NT speaks about the presence of the Son and Spirit.

Within this account of visible and invisible missions, the trinitarian dimensions of Aquinas’s Christology come into view. It is only when we understand the Son’s filial mode of being as the eternal Son of the Father that we also understand his filial mode of agency, which is to act from the Father. Legge argues that this same principle also accounts for the fact that, just as the Son is and acts ‘from’ the Father, so too the Son is and acts with a forward reference ‘to’ the Spirit. From and with the Father, the Son eternally breathes forth the Spirit, and so from and with the Father the Son temporally sends the Spirit both upon himself and upon his church. The order and inseparability of the missions follows the order and inseparability of the processions.

The final part of the book in chapters five through eight constitutes the heart of the book’s contribution, and it is considerable. Here Legge explores at length how the Son and Spirit relate to one another in the economy. For Aquinas, the Holy Spirit’s invisible mission is the source of the grace created in the soul that sanctifies (gratia gratum faciens), which yet depends on the uncreated grace (auxilium) of the Trinity moving the soul to acts of love. This habitual grace is appropriated to the Spirit, but it is the sign and basis of the whole Trinity’s residence in the soul. The grace of Christ’s human soul is therefore the point of entry for consideration of the Spirit’s work in Christ’s life: the Spirit descends upon Christ at his baptism and transfiguration to signify the gifts of grace he bestows on Christ to save and to teach. Legge shows how the Spirit’s invisible mission to the Son in grace accounts for the Son’s gifts of grace, including his beatific vision and prophetic knowledge, as well as the entitative and operative habitus that enable the Son’s human nature and agency to operate in perfect accord with his divine nature. The Spirit’s work on Christ is therefore intrinsic to Aquinas’s understanding of the Son’s theandric activity. Beyond equipping the Son’s humanity as an ‘instrument’ of his divinity, the Spirit also moves the incarnate Son to act (again, in an appropriated sense, because the Trinity acts indivisibly ad extra). So like creatures more generally, so similarly with the Son: the Spirit bestows both a habitual and ‘actual’ grace that enables all the Son’s acts for his saving work. In conclusion, Legge unfolds Aquinas’s development on the question of whether the Son can send the Spirit as a man, which resolves upon his understanding of the Son’s theandric activity: the Son sends the Spirit ‘authoritatively’ as God and ‘instrumentally’ as man.

Legge’s work is indispensable to those interested in understanding Aquinas’s Christology, and in tracing its broader influence. The evidence marshaled and the judgments drawn are all well-supported, and avoid the easy trap of reading too much into Aquinas. Not everyone will agree with Aquinas’s conclusions, but the piece is more historical and descriptive than analytical. It is helpful on a number of fronts, and should breathe fresh air into debates about ‘Spirit Christology’ especially because the example of Aquinas shows how imprecise such designations can be historically. Those wondering how to relate the missions of the Son and Spirit intelligibly would do well to give Aquinas careful consideration, and to that end, should direct their attentions to Legge’s fine work.