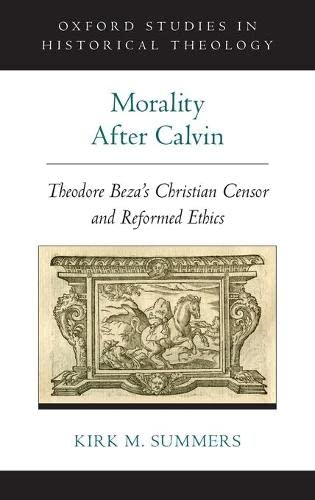 There is a relative dearth of treatments on the ethics of the Reformers outside of the most significant figures, like Calvin and Luther. The moral reasoning of such early major figures is treated as normative for the entire movement, without carefully considering the application and extension of those ethical concepts in later generations. In some ways, the study of the applied ethics of the next generation after a major figure is more significant than the ethics of the great theologian, as a means of judging the impact of famous figure. Kirk Summers fills this void for John Calvin with his recent volume, Morality After Calvin: Theodore Beza’s Christian Censor and Reformed Ethics.

Summers is a professor of Classics at the University of Alabama, but he also holds a Master of Arts in Biblical Studies from Reformed Theological Seminary. His background in the Reformed tradition adds a layer of richness to this volume, as he regularly connects the ideas of Classical thinkers with the Reformed theology that arose from the milieu of scholasticism. Summers clearly did his research in both disciplines, as he cites the most significant works on the ethics of the Reformers, including recent secondary works. This volume also brings to light evidence from recently available, unpublished Consistory records, which add to the scholarly value of the book.

The volume is divided into nine chapters with an additional introduction. Chapter one opens with an overview of Beza’s poem, Cato Censorious Christianus, that was written to present a view of Christian ethics, addressing key issues in his context. Summers outlines Beza’s presentation of basic theological concepts like sin, God, and natural law in this chapter. In the second chapter, Summers shows how Beza presented topics like humility, obedience to the Word, and the pursuit of doctrinal integrity. Chapter three presents an ethics of integrity, including truth telling, honesty in the marketplace, and generosity.

The fourth chapter examines Beza’s call to diligence in life. This chapter touches on Beza’s notion of vocation, games of chance, and laziness. Beza follows the other Reformers in developing a doctrine of vocation apart from ministerial service. Chapter five deals with usury, which reflects tension between the permissive attitudes of other Reformers and classical prohibitions. In this chapter, Summers branches out beyond Beza more than in other chapters to capture the extensive debate over the practice of charging interest that was ongoing in that time. In the sixth chapter, Summers treats the attitude of Beza and the Geneva Consistory toward sexual ethics. Summers shows that Beza’s attitude was consistent with Scripture, but that the Consistory was not always faithful in enforcing discipline for sexual immorality.

Chapter seven is a catch-all for the miscellaneous ethical themes covered in Beza’s ethics. In this chapter, Summers covers Beza’s writings on drunkenness, Catholic infiltrators, and those who attempt to live life ignoring God. The eighth chapter has a different tone, dissecting Beza’s reflections on old age and his impending death. Chapter nine concludes the volume with summative analysis and commentary on the impressive consistency of Beza’s ethics over fifty-seven years of active ministry. Summers ties together some of the themes that run through the volume, most significantly that the Reformers viewed sanctification as a process not a singular event.

Morality after Calvin deserves significant praise. It is a book that fills a significant void in the study of historical ethics by analyzing the moral theology of Theodore Beza in light of the Consistory records of Geneva. The book is at times dense, but the prose is never turgid. Summers communicates clearly, carefully, and thoroughly. Summers engages the thinking of Beza and his contemporaries critically, but charitably; he contextualizes Beza’s writings, particularly Cato Censorious Christianus, the moralistic poem that guides the reader through the book.

The author does excellent, careful, and thorough analysis of various ethical topics. The chapter on Beza’s ethics of usury is a worthy summary of the major literature of the field, as well as Beza’s own perspective. With one foot in Reformation studies and the other in Classics, Summers is able to aptly interpret the translation of Classical thought into the poetry and ethics of an early Reformer. For many, Beza’s Cato Censorious Christianus would be a quaint attempt to mimic previous poets. For Summers, Beza’s poetry is an intriguing dialogue between ancient ethics and biblical morality. Summers gracefully highlights the allusions, nuances, and contours of Beza’s literature in a way that illuminates the text for readers with an interest in ethics in the Reformed tradition who lack a background in Classics.

This latest volume in the Oxford Studies in Historical Theology Series is an important piece of scholarship and a valuable addition to the library of Reformation scholars, ethicists, and theologians interested in the development of morality within the Reformed tradition. Its price will likely consign this volume to the shelves of libraries and specialists, but it is a book that deserves to be read well and widely.