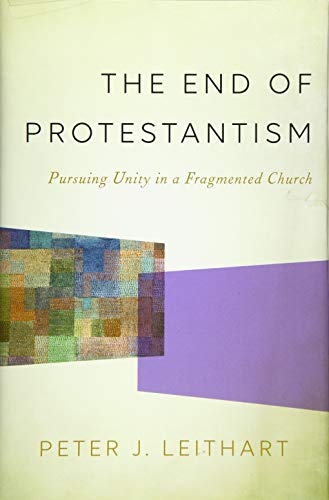 The End of Protestantism: Pursuing Unity in a Fragmented Church

“Jesus prayed that his disciples would be united as he is united with his Father” (John 17:21). This is where—with his very first sentence—Peter Leithart’s cri de coeur begins.

Denominationalism, Leithart continues, “is not what Jesus desires for his church. It does not fulfill his prayer” (p. 4). So why have Protestants allowed ecclesial fragmentation to persist? Leithart answers: “We can live with ourselves because we have created a system to salve our conscience and to deflect the Spirit’s grief” (p. 3). In the pages that follow, Leithart seeks to remove the salve and expose the Protestant conscience.

Leithart conceives of his book as meeting a moment of productive flux and re-organization in the ecclesial landscape. “I speak from within denominational Christianity to call Christians to strive in the Spirit toward a new way of being church. This is an interim ecclesiology and an interim agenda aimed specifically at theologically conservative evangelical Protestant churches” (p. 5). He calls his agenda for change “Reformational Catholicism.”

Four overarching movements advance Leithart’s purpose. In the first, he lays out a vision for a Reformational Catholic Church in the future, contending for its biblical and Reformational cogency. His second movement analyzes denominational Christianity in the United States, arguing that despite its accomplishments, it has impoverished the church by undermining its unity. An intermezzo shines optimism onto the problem of denominational fragmentation by explaining how the Creator God dismantles the structures of the world, even ecclesial structures, in order to reassemble them according to his redemptive grace. Movement three contends that God is remapping the global church, signaling a potential inflexion point for American denominationalism. Finally, in the fourth movement, he offers guidelines to theologians, pastors, and lay Christians who wish to apply his proposal in the hope of realizing such unity.

So where does Reformational Catholicism begin? Leithart suggests, “We live the future now when we receive and cultivate the fruits of the Spirit that preserve and deepen the unity of the church” (p. 20). But such communion requires mutual commitment, particularly in the following areas:

Conservative Protestants have, with good reason, regarded such aspirations with a healthy measure of suspicion. But Leithart insists that we must nevertheless prioritize visible unity according to the above commitments. No, this does not mean that reunion is simply a matter of returning schismatics to the mother church. History matters too much; differences cannot be swept under the rug. Yet somehow, Leithart maintains, there must be rapprochement.

In this opening section, Leithart is speaking simultaneously as prophet and visionary. In line with the latter, he paints a portrait of Reformational Catholicism (pp. 25–36), asserting that it will leave every creed and confession open to correction by the Word of God. It will teach the entire Bible. It will not insist on prayers to Mary or veneration of icons. All pastors will recognize the ordination and authority of all others. It would be a culturally engaged church in which pastors mix with mayors, city managers, and other social stakeholders.

What is required to approach this vision? Starkly, in Leithart’s view, “ecclesial death” is required. Our churches, in other words, will have to die to some of the things we hold dear (p. 36). “Presbyterian churches,” says Leithart, “would no longer be not-Lutheran, nor the Lutheran a not-Presbyterian. Methodists would no longer identify themselves as not-Catholic. All would be congregations of the church, local outposts of one global communion” (p. 37).

I am not exactly sure why I wrote “ecumenical fudge” in the margin beside this section. Maybe my blood sugar was low. Or maybe it was the class on Luther I just finished teaching, which illustrated the profound difference, not of whim and fashion, but of conviction and conscience between these traditions. I certainly agree with our author that we can do better than the Marburg exchange. We ought to affirm the same Spirit in one another. But as Leithart has already asserted, “History matters.”

He concludes his first movement with an exhortation. “We need to repent of our failure to follow the Lord Jesus, who prays that we would be one, as well as our failure to pray for unity in and with him” (p. 51). But does not fidelity to our Lord require us to be more concerned with the substance of our unity than the mere degree of it? To be sure, some kind of visible unity is desirable. But must it be institutional? Can the center of gravity be on a common kerygma from different denominations? More about this anon.

The second movement begins with a bold assertion: “[This vision] is not the church of the present. Emphatically not” (p. 55). If we are envisioning a specifically institutional unity, Leithart is surely right. But what about, for example, the lecture series we recently hosted in our non-denominational church, where I had R. R. Reno of First Things speaking on the future of marriage and my friend Dan Olson of the (Catholic) Archdiocese of Chicago responding among other scholars. I would like to think of that event as Reformational Catholicism—we stood together on our common Christ-centered convictions despite our differences. At this point of the book, I am beginning to find Leithart’s definition of visible institutionalized unity unnecessarily narrow and pedantic.

The intermezzo—titled “From Glory to Glory”—is a chance for readers to take a breath and digest the preceding ninety-eight pages of pointed critique. More than that, it is a delight to read the unfolding story of redemption from such a gifted expositor as Leithart. This section concludes with the observation that history is not a seamless garment. “It has gaps and tears, some quite rough. There are evenings and mornings, deaths, and revivals. God tears garments and then sews them back together in new ways. That is the story of the Bible and it is the continuing story of church history” (p. 113). Thus, because God is the Living Creator, still working powerfully and surprisingly in history—moving backward in death before moving forward in resurrection—we should not be surprised when he shakes up our ecclesial world.

In his third movement, “Divided Church Dissolving,” Leithart explores American denominationalism and the global church. He considers Pentecostalism as an example of a new form of Protestantism that breaks down traditional boundary markers. He adds to this nondenominational church networks such as Willow Creek and concludes, “The time seems ripe for a seismic reconfiguration” (p. 151).

Movement four, “United Church Reborn,” seeks to take readers from the present to the future. This is where Leithart the prophet discharges some specific directives, applying Reformational Catholicism to various dimensions of church life (e.g., sacramental theology, pastoral ministry, liturgy, and social action). Appropriately, he concludes with a wish: “I dearly hope that Protestant tribalism of American denominationalism dies” (p. 191).

Leithart is surely correct when he writes, “The church can face the challenges of this new century only as a united church” (p. 166). And he helpfully points out that this engagement “affords a fresh opportunity to heal old wounds and break down old misunderstandings” (p. 166). But his focus on institutional unity suffers from two fundamental flaws. First, Roman Catholic ecclesiology postulates a hierarchy of churches, in which Rome stands over other Christian traditions, particularly Protestantism. This is observed in Rome’s insistence that “the one Church of Christ subsists in the Catholic Church,” an assertion made by the Second Vatican Council in the ecumenical decree Unitatis Redintegratio (cf. Lumen Gentium, n. 8), and reiterated by more recent statements such as Ut Unum Sint (1995) and Dominus Iesus (2000). Unfortunately, this undermines the dialogue that Leithart envisages by placing conversation partners on an unequal footing, suggesting that one side of the conversation (Protestantism) is inferior and defective.

The second problem is closely connected to the first, and concerns Rome’s use of the term “Catholic” as properly describing the Roman Catholic Church. Against this background, Pope John Paul II declared that “the ultimate goal of the ecumenical movement is to re-establish full visible unity among all the baptized” (Ut Unum Sint, 77). Taken to its logical conclusion, this would mark the end of Protestantism by submitting it to Roman authority.

Faced with the contemporary temptation of Docetism and the danger of yielding to the fragmentation of postmodernity, we must not disregard the importance of visible unity. In this way, Leithart does the contemporary church a service by daring us to imagine ecclesial life bound together in universal communion. To succeed, however, at least in the institutional form that he proposes, the Roman Catholic Church will be required to make the most fundamental changes, which will require the end, not of Protestantism, but of Roman Catholicism as we know it.