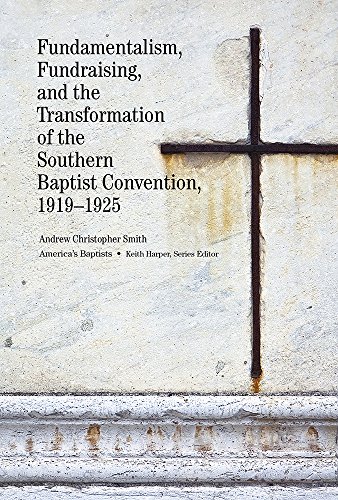 Fundamentalism, Fundraising, and the Transformation of the Southern Baptist Convention, 1919–1925

In his first book, Andrew Christopher Smith, Assistant Professor of Religion at Carson-Newman University, makes a two-pronged argument. First, he explains the relationship between American Fundamentalism and Southern religion during the crucial period of Fundamentalism’s development, 1919–1925. Although he occasionally brings into his analysis the perspective of other denominations residing in the South such as the Disciples of Christ, Smith focuses most of his attention on the Southern Baptist Convention (SBC), the largest and most influential Christian group in the region by the time of World War I. Thanks to George Marsden’s landmark Fundamentalism and American Culture: The Shaping of Twentieth Century Evangelicalism, 1870–1925 (New York: Oxford University Press, 1980), Smith notes that scholars have a good grasp of the origins and growth of Fundamentalism in the northern United States but not how Fundamentalist ideas affected the South.

Related to his first argument, Smith also examines how the Southern Baptist Convention moved toward increasing bureaucratization and centralization in order to raise funds for the ambitious, and on the surface, unsuccessful, “Seventy-Five Million Campaign.” Southern Baptist leaders encouraged church members to give, and in an emotional fervor, church members pledged to give over $92,000,000 in 1919. Eventually, as a result of the postwar depression, members contributed only about $59,000,000 of their pledged money, and the SBC became mired in debt for decades to pay for the shortfall. While the fundraising campaign did not meet its goal, Baptist denominational leaders continued to insist upon the need for a professionalized and educated bureaucracy that could most efficiently raise and allocate funds. The leaders’ emphases upon centralization and an educated, professional class of bureaucrats mirrored Progressive movement trends in governmental and business common in that time. The Seventy-Five Million Campaign was also the forerunner of the SBC’s Cooperative Program, established in 1925, which made denominational centralization permanent in SBC life.

Perhaps the most valuable contribution that Smith makes to the historiographies of both Fundamentalism and religion in the post-Civil War South is his contention that “faced with pressure from the burgeoning ecumenical movement on the left and Fundamentalism on the right, leaders among Southern Baptists chose neither route but instead constructed a third way that reflected the influence of both” (p. 5). Southern Baptists adopted fundraising and advertising practices that were prevalent in the ecumenical Interchurch World Movement (IWM), but rejected the IWM’s perceived watering down of the gospel for the sake of institutional cooperation. In turn, Southern Baptists agreed with Northern Fundamentalists’ arguments for inerrancy and the divine origin of the Bible, but they found distasteful many Northern Fundamentalists’ penchant for separating from their denominations and used their own lack of doctrinal controversy to illustrate SBC denominational unity and superiority.

Moreover, Smith’s book is unique because he is the first to analyze in any sort of detail the Seventy-Five Million Campaign’s impact upon the SBC and how the move toward centralization and professionalization was reflective of tendencies prevalent in the wider Progressive milieu. Smith also conducted an extensive analysis of approximately twenty state convention newspapers to show how Southern Baptist denominational leaders like E. Y. Mullins and especially Lee Scarborough wrote letters and essays in the newspapers to encourage and cajole Southern Baptist congregations to fulfill their pledges in order to prove their obedience to God as faithful givers and their loyalty to the SBC. Smith observes how the newspapers’ editors also “included letters from their readers when they could, providing extremely rare and valuable glimpses into the thoughts and lives of their workaday Baptist readers” (p. 10). As a result, historians can evaluate not only what denominational leaders or state convention leaders thought about denominational centralization but also whether the average church members thought that the changes occurring in SBC life were good for Baptists. His detailed examination of Baptist newspapers made the story of the campaign come alive for this reviewer and is reminiscent of Gregory Wills’s comprehensive and successful use of the Georgia Baptist newspaper The Christian Index to discuss the importance of church discipline and its eventual decline in Baptist churches in Georgia in his Democratic Religion: Freedom, Authority, and Church Discipline in the Baptist South, 1785–1900 (New York: Oxford University Press, 1997).