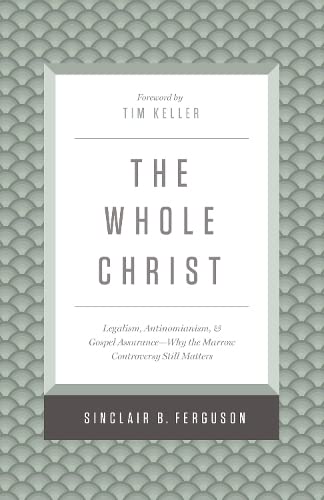 Decades ago, Sinclair Ferguson gave a short lecture series, “Pastoral Reflections on the Marrow Controversy” (online: https://www.monergism.com/pastoral-lessons-marrow-controversy). These lectures on this episode of Scottish church history helped many Reformed Evangelicals (some more recently) gain renewed gospel clarity by refreshing our understanding of the scriptural relationship between law and gospel in Christ’s person and work, and the Christian’s life. After numerous requests to write on the topic, Ferguson’s The Whole Christ: Legalism, Antinomianism, and Gospel Assurance—Why the Marrow Controversy Still Matters is the long-awaited result.

So then, what is the book about? Spring-boarding from some of the Marrow Controversy’s themes, The Whole Christ focuses on the completeness of the person and work of Christ in relation to law and gospel, legalism, antinomianism, assurance, and more. The result is a number of very helpful, pastorally oriented discussions that point us to our all-sufficient Christ. The book sagaciously guides us to see a variety of dangers, some subtle, others not, that draw us away from him.

While pointing out detractions from the Christ of the gospel, the volume is not negative in its orientation. The tenor is positive, winsome, and Christ-centered, with the occasional poke and rebuttal tucked in along the way. One example of the latter is Ferguson’s warning against a kind of theologizing which, while in love with solid scholasticism and careful definition, loses the centrality of union with Christ, and a clear view of Christ himself.

Ferguson reflects a similar caution regarding experiential paradigms of conversion, as popularized among English Puritans and their heirs who, in some cases, “encouraged a preparationism that in effect became an obstacle to the free offer of the gospel” (p. 57). Dedicated supporters of Bunyan’s Pilgrim’s Progress may be surprised by Ferguson’s sympathy to C. H. Spurgeon’s critique of Evangelist’s counsel to Christian. However, his case, like Spurgeon’s, is that Bunyan’s graphic narrative of the conversion of Christian, as “the pilgrim” of Pilgrim’s Progress held sway in popular imagination (despite the later story of Christiana), fostering a belief that conviction or the forsaking of sin “constitutes the warrant for the gospel offer” (p. 59).

Ferguson sees Bunyan’s writings as more widely presenting a case for not obscuring Christ even as we pursue genuine repentance and sanctification. Digging into the fascinating use of visual illustrations of the doctrine of salvation in the ocular catechisms of William Perkins and John Bunyan, he notes that the person and work of Christ are explicit in the former, implicit in the latter (p. 60). “In the case of Perkins’s Golden Chaine the central significance of Christ and union with him is obvious; in Bunyan’s chart this is not so. In Perkins every spiritual blessing is related to Christ; benefits are never separated or abstracted from the Benefactor. In Bunyan’s map, in fact they are” (p. 61). The danger that concerns Ferguson is the influence this can have on our approach to gospel preaching, causing us to focus on “abstracted and discrete blessings . . . and then the question of how we receive them,” with the ultimate tendency of turning ourselves inward, rather than Christ-ward (p. 61). Ferguson provides a healthy reminder that congregations hear what we say, in the priority and proportions we say it. They do not hear all that we have in our minds. Emphasis matters.

The theme of our need for Christ himself is steady throughout the volume. Where Ferguson addresses the remedy for legalism, he notes that we need grace, but not “‘grace’ as commodity, grace as substance” (p. 134). We need grace in Christ; we need Jesus Christ himself. “God’s grace to us is Christ” (p. 134). Ironically, preachers can repeat the words “grace” and “gospel” while missing Christ. As a result, their proclamation of “grace,” forgiveness, new life, and new obedience, remains graceless. Their people remain impoverished, because they are not feeding on Christ. This is no negation of law or gospel. Just as to preach Christ is to preach the gospel, Ferguson upholds the moral law’s enduring place as the law of Christ. The right preaching of the gospel of Jesus Christ also answers the error of antinomianism: “conformity to [the law] is the fruit of our marriage to our new husband Jesus Christ” (p. 154). The reminders and insights for our lives and ministries in these chapters are well worth the purchase in themselves.

There is much more packed into the book. In passing, Ferguson addresses current intrigue with hypothetical universalism among some Reformed historical theologians. He accurately maintains that Boston and the Marrow brethren were particularists who proclaimed the free offer of the gospel of Christ to everyone. They read the text of The Marrow of Modern Divinity accordingly, and presented a good case for doing so. Ferguson devotes an intriguing footnote in response to a key aspect of Jonathan Moore’s English Hypothetical Universalism and the conclusions he draws respecting Edward Fisher and the use of his writing in Scotland (p. 41). Elsewhere, Ferguson weaves in assessments of the new perspective on Paul (p. 89), New Covenant and Klinean formulations of covenant theology and views of the moral law as given at Sinai (cf. p. 162–173), providing more food for thought.

Ferguson’s final chapters deal with assurance. He gives mature pastoral guidance on assurance, though by this point in the book he has largely left the Marrow controversy and the Marrow brethren’s views of assurance outside of the discussion. These final chapters in many ways epitomize The Whole Christ: a pastorally rich, clarion call to Christ in all his completeness, drawing on, but only giving us a scattered and incomplete glimpse of the Marrow controversy. While the volume may better have been titled, The Whole Christ: Reflections on the Law and Gospel in Christ, every pastor should read and benefit from this book.