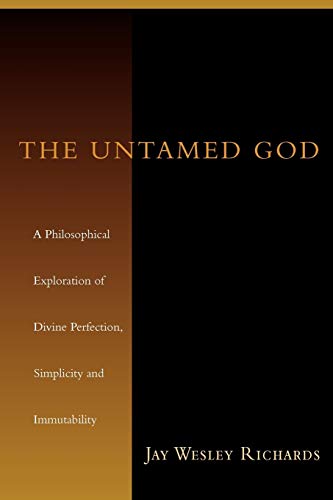 THE UNTAMED GOD: A PHILOSOPHICAL EXPLORATION OF DIVINE PERFECTION, SIMPLICITY AND IMMUTABILITY

The Untamed God is a defence of theological essentialism; that is, the claim that God has an essence, which includes his perfections and essential attributes, and that he possesses both essential properties (characteristics which could not have been otherwise) and contingent properties (characteristics which couldhave been otherwise). Now why, you may ask, should anyone want to defend such a claim? Richards’ answer is that the coherence of the Christian view of God depends on it. Christians have traditionally wanted to make certain theological claims, such as: God exists; God is perfect; God created and sustains everything other than himself; God freely chose to create the world; God freely chose to enter that world as a human to redeem it. The problem is that some of these claims exhibit a prima facie conflict with others. For example: if God is perfect, why would he be at all inclined to ‘add’ to himself by creating the world? If God is changeless, how could he become incarnate? Richards contends that theological essentialism provides the optimal framework for resolving such difficulties; and while the view itself is easy to state (even to the point of appearing trivial), it needs to be carefully articulated, defended against serious objections, and shown to be philosophically and theologically superior to competing conceptions of God.

Chapter 1 provides a historical overview of ‘classical’ theism, that view of God dominant in the Western theological tradition, and identifies three regulative principles or themes that have proven central to Christian theologising: (1) biblical normativity (a recognition that Scripture makes authoritative statements about God); (2) the Principle of Perfection (roughly, that God is maximally excellent); and (3) the Sovereignty-Aseity Conviction (roughly, that God depends on nothing outside himself, whilst everything else is dependent on God). Richards’ treatment here serves as a timely reminder of why doctrines such as divine simplicity and immutability, though much maligned today, were so favoured by Christian thinkers of the stature of Augustine, Anselm, and Aquinas.

In the next two chapters, Richards introduces his basic essentialist model, which aims to satisfy (as far as possible) these three regulative principles. Chapter 2 provides, with commendable succinctness, a lesson in modal logic and ‘possible world’ semantics, followed by a defence of generic essentialism (the view that everything has an essence, i.e., a set of essential properties). Chapter 3 then applies this philosophical apparatus to theology, explicating in a specifically Christian theistic context the claim that God has both an essence and various contingent properties. This model is subsequently pitted against two alternative attempts to improve on classical theism: Karl Barth’s ‘actualistic’ doctrine of God and Charles Hartshorne’s ‘surrelativist’ doctrine of God. Richards’ careful exposition and analysis in these chapters provides invaluable insights into the theological rationale behind these two systems, and while he concludes that both are inferior to the essentialist model, he suggests that the essentialist can learn important lessons from the strengths and weaknesses of each.

Chapters 7 and 8 present Richards’ appraisal of the ‘difficult’ doctrines of divine immutability and divine simplicity. Noting that both attributes have been variously construed, Richards’ strategy is to identify the strongest version of each that is compatible with essentialism. The upshot of his analysis, to oversimplify, is that a moderate construal of both doctrines can be sustained on a Christian essentialist position.

The Untamed God is an exemplary piece of philosophical theology, even if (as its author admits) some of the questions it raises go unanswered. For Christians concerned to retain a theologically conservative yet philosophically cohesive doctrine of God, Richards’ defence of essentialism constitutes, I would say, essential reading.