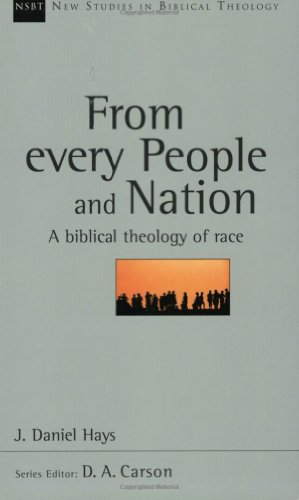 FROM EVERY PEOPLE AND NATION, A BIBLICAL THEOLOGY OF RACE

The West, Hays maintains, has tended to impose its own characteristics on its depiction of biblical characters, both in art down through the centuries and, more recently, in the cinema. Important biblical data has been overlooked or misinterpreted to the detriment of a sound theology of race.

Hays examines pertinent biblical texts. In the Genesis creation narrative, the racially generic Adam represents the whole of humankind who, irrespective of racial distinctions, share equally in the dignity of bearing the image of God. The so-called ‘curse of Harm’ (Gen. 9) has often sanctioned discriminatory views towards Black African races. Hays robustly rejects this misrepresentation of the text: the ‘curse’ is directed specifically against Canaan, and is rather to be interpreted in the light of the Israelites’ eventual conquest of Canaan and its inhabitants.

From the ‘Table of Nations’ in Genesis 10, Hays draws the theological point of the common origin of all races; all fall equally under the judgement of God and, therefore, are equally eligible for the promise of divine blessing that is made to Abraham and which informs many other texts in both the Old and New Testaments.

Even the chosen people of God were not ethnically ‘pure’. The ‘mixed crowd’ (Exod. 12:38, NRSV) that shared in the Exodus event along with the ‘sons of Israel’ almost certainly included Cushites (Black Africans). If these accepted worship of Yahweh and were circumcised, they were eligible to share in the covenantal Passover meal. Significantly, in Hays’ opinion, it is not God who criticises Moses’ marriage to a Cushite (Num. 12) but Aaron and Miriam; indeed, in the dispute God stands with him against them. Hays concludes from this episode and from other evidence that racial intermarriage is sanctioned by Scripture of believers.

In chapter 5, Hays sets out his case that Black Africa played a big part in the biblical story, noting the 54 references to Cush/Cushites in the Hebrew OT. Phinehas the priest and Ebed-melech who helped Jeremiah out of the slimy cistern are other notable Black Africans in the biblical narrative. In fact, a reader might get the impression that the book gives an unbalanced prominence to Cush and Black Africa. Hays served in mission in Ethiopia (broadly associated with ancient Cush) over a number of years, but his interest in Black Africa is also due to his perception that some of the ugliest expressions of racism have been/are directed towards Black African races. He is also seeking to redress the widespread opinion in Africa that the biblical world only engaged with Africa with the relatively recent coming of Western missionaries and that Christianity is a ‘White man’s religion’. Hays notes the frequent scholarly portrayal of Cushites in the Bible as belonging to the menial, slave classes and rejects it as a ‘reading back’ into Scripture of historical prejudices. In fact, Cushites often exercised important leadership roles in Egypt and elsewhere, and indeed Egypt was actually ruled by Cush in the 25th Dynasty (from 715 BC to 663 BC).

The prophets (especially Isaiah) and the prophetic voices in the Psalms present an eschatological vision of Yahweh bringing all peoples together in worship in fulfilment of the promise to Abraham. It is a vision whose fulfilment in Christ is emphasized by such NT authors as Luke and Paul.

The book of Revelation looks forward to the eschatological realisation of the people of God as multi-ethnic and multi-cultural, drawn from every nation upon earth, united in their worship of God and of the Lamb.

Hays writes in a clear accessible style, with frequent summary sections. A bibliography of some 450 entries indicates the degree of his interaction with scholarly debate. There is an index of authors, and another of Scripture references. A map of the ANE and northeastern Africa would have been helpful. If some of his arguments are speculative, they are nevertheless based on careful scholarship. Finally, despite the academic rigour, pastoral and contemporary concerns of the author are not far beneath the surface. His theology is one of engagement; he argues passionately not for the obliteration of ethnic differences, but for their theological and spiritual irrelevance within the transforming unity of the family of God in Christ.