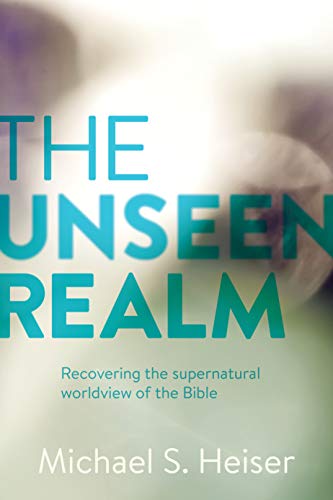 The Unseen Realm: Recovering the Supernatural Worldview of the Bible

A fundamental Christian belief is the existence of the supernatural. However, in The Unseen Realm, Michael Heiser (Scholar-in-Residence for FaithLife’s Logos Bible Software) argues that Christians—primarily conservative Western Christians—have not fully appreciated the role of the supernatural for biblical theology. According to Heiser, “a theology of the unseen world that derives exclusively from the text understood through the lens of the ancient, premodern worldview of the authors informs every Bible doctrine in significant ways” (p. 13, italics original).

Heiser’s theology of the unseen world is founded on the premise that God presides over a council of lesser divine beings (cf. Ps 82). The members of this “divine council” (pp. 25–27) accomplish God’s purposes in the supernatural realm, therefore functioning as the heavenly counterpart of humanity on earth. Although he refers to these divine beings as “gods” (elohim in Hebrew), Heiser rejects the notion that God is subordinate or co-equal with them in the polytheistic sense and instead contends that “there is no warrant for concluding that plural elohim produces a pantheon of interchangeable deities” (p. 31).

Despite their noble status, some members of the divine council rebelled against God. Heiser argues that Isaiah 14 and Ezekiel 28 describe the self-exaltation of one of the divine council’s members. This lesser divine being—identified by the New Testament as Satan—corrupted Adam and Eve as the serpent. God, in turn, declared war between the offspring of the serpent and humanity (Gen 3:15). This conflict subsequently manifests itself in two key events from the Primeval History that lay the foundation for the rest of the biblical metanarrative.

The first key event is the “sons of God” episode of Genesis 6:1–4. Heiser rejects the idea that the “sons of God” are mere humans and instead argues they are members of the divine council who, like Satan, rebelled against God. Instead, the Nephilim or “giants”—analogous to the apkallu of Mesopotamian tradition—were their semi-divine offspring. Like the fallen divine council members that engendered them, these “giants” posed a serious threat to the reestablishment of God’s Edenic rule.

The second key event is God’s judgment at the Tower of Babel. Heiser interprets Genesis 11:1–9 in light of Deuteronomy 32:8–9 (as preserved in the Septuagint and Dead Sea Scrolls rather than the Masoretic Text), contending that at the Tower of Babel, God chose Israel for himself but disinherited the other nations, placing them under the authority of his divine council. Many of those divine beings, however, became corrupt and led the nations they supervised astray in idolatry. Heiser refers to God’s disinheritance of the nations at the Tower of Babel as the “Deuteronomy 32 Worldview” (pp. 113–15).

God’s disinheritance of the nations and selection of Israel necessitated the call of Abraham and the establishment of the Israelites as a nation in Canaan. The fallen divine council members opposed this, however, and once again engendered semi-divine offspring known as the Anakim and Rephaim. These “giants” were therefore the targets of Israel’s conquests (cf. Josh 11:21–23) and of David’s military exploits (cf. 1 Chr 20:4–8). Their defeat paved the way for God’s future reclamation of the nations he had disinherited at Babel, his future defeat of the rebellious divine council members, and his future establishment of an everlasting kingdom (cf. Isa 66:16–19; Zech 14:1–5, 21–23; Ps 82:6–8; Dan 7).

Jesus—who, as Heiser contends, ranks unique among the divine council members and is to be identified with the Hebrew Bible’s Angel of Yahweh (pp. 36–37, 134–148)—is ultimately the one who reestablishes Edenic rule through his work on the cross. Jesus’s followers, as the offspring of Abraham in perpetual conflict with the serpent’s offspring, are to expand God’s kingdom by proclaiming the gospel in the very nations governed by fallen divine council members. According to Heiser, Pentecost “began the process by which the disinherited nations would be brought back into Yahweh’s family . . . that would culminate in a global Eden” (p. 306). Furthermore, the Holy Spirit’s commissioning at Pentecost provided believers with authority over the nations that were originally assigned to the divine council members. In this way, believers are effectively incorporated into the divine council and the latter becomes integrally connected with both the Creation Mandate (Gen 1:28–30) and Great Commission (Matt 28:18–20).

According to Heiser, the divine council will play a significant role even when Christ returns. Gog and Magog—the nations of the “north” that are none other than the territories once governed by corrupt divine council members—will be defeated at Armageddon (pp. 358–367). Furthermore, according to Heiser the Hebrew phrase underlying the Greek harmagedōn (Rev 16:16) is not har megiddo (“the mountain of Megiddo”) but har moed (“the mountain of assembly” (pp. 368–75). In Jerusalem, therefore, God will defeat the powers of darkness once and for all and restore his Edenic rule. In his victory God will be accompanied by both loyal members of the divine council and believers who have displaced the corrupt gods of the nations.

The above summary does not do adequate justice to this unique and fascinating book, which indeed accomplishes its purpose of recovering the supernatural world of the Bible and demonstrating how the notion of God’s divine council affects all of Scripture. On the whole Heiser cogently and effectively demonstrates the importance of the divine council for Scripture’s metanarrative. In doing so, he offers a fresh and coherent reading of Scripture that is appropriately shaped by the contextual world of the Bible.

The Unseen Realm is generally academic in tone but easy enough for non-scholars to follow. This makes it quite accessible, but I found myself occasionally wishing for more extensive discussion and substantiation of certain claims. For example, somewhat underdeveloped is Heiser’s claim that acceptance of the divine council, which is composed of lesser divine beings or “gods,” does not constitute polytheism (pp. 29–32). On this point Heiser offers only a brief discussion and refers the reader to the book’s companion website (www.moreunseenrealm.com) as well as some of the articles he has published on this topic. Similarly, Heiser provides very little discussion of his claim that Deut 32:8 should be read in accordance with the Dead Sea Scrolls and Septuagint rather than the Masoretic Text, once again referring to one of his own articles. I understand that Heiser is writing for a more popular audience, and I do not necessarily disagree with his conclusions. Nevertheless, it would have been better for Heiser to substantiate these potentially controversial claims in the book itself, especially given their foundational nature for his argument as a whole.

Readers of The Unseen Realm may not agree with each of Heiser’s points, and they may not always be comfortable with Heiser’s insistence that we read the Bible through ancient Near Eastern lenses, especially when the resulting interpretation clashes with traditional theological formulations and creeds. Ultimately, however, these same readers will be better off for having been challenged to read Scripture within its original context. The Unseen Realm offers a valuable contribution to our understanding of the unseen realm, and its biblical theology of the supernatural should receive serious consideration by Christians.