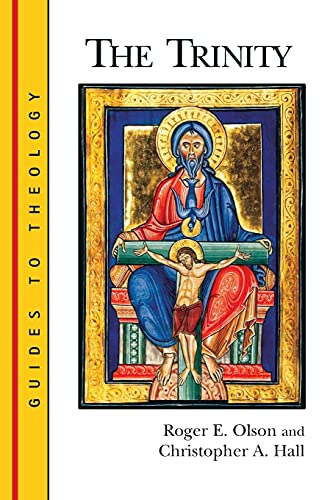 THE TRINITY: GUIDES TO THEOLOGY 1

This very useful book is the first in a new series of ‘Guides to Theology’ published by Eerdmans under the auspices of the Christian Theological Research Fellowship. After a brief introduction on the biblical evidence for the doctrine of the trinity (which follows exclusively the treatment by G. O’Collins, in his The Tripersonal God), the book is divided into three parts: two chapters on the historical development of the doctrine of the Trinity (divided into Patristic, and Medieval, Reformation and Modern), and an annotated bibliography. A review like this is not the place to summarise the content of a book that is already (to its credit) an extremely concise summary. However, the authors make good points of the way in which theologians have historically attempted to avoid the various perils involved in the formulation of the doctrine.

First, one detects the obvious swings of the pendulum between the tendencies towards tritheism (over-emphasising the distinction between the persons) and the modalism which tends in the opposite direction. Related to this, another prominently recurring tension is that between divine being and divine relationship. While Augustine emphasised the being of God almost at the pre-condition for the inter-relationship of Father, Son and Spirit, others such an Gunton and Zizioulas see the relationship of love as the essence of God’s being.

Furthermore, Olson and Hall give a good historical account which show the way in which various criticisms have been levelled at theologians who have overstretched themselves in their formulations. Already in the second century, Irenaeus railed against the elaborate schemes of the gnostics (26), and Luther called for the crucifixion of metaphysics (68). But scholastic formulations have also been criticised by Anabaptists (73), Unitarians (76), deists (83), pietists (85), and social-gospel theologians (94) alike.

Finally, we should note the issue, never far from the surface, of the development of God in history. Olson and Hall rightly reject process thought as untrue to the historic Christian faith, but at this point are too tolerant of Moltmann’s theology of historicity. The author’s paraphrase Moltmann’s position thus: ‘God’s perfect unity as God is eschatological. It stands at the end of human history as God’s goal’ (101). It is highly questionable, however, whether this is compatible with orthodox Christianity either; there seems to be a serious compromise of divine freedom here. In the book in general there is too little attention to those theologians who, ultimately influenced by Hegelian thinking, fall into the trap of talking in terms of God’s self-perfecting or progress.

Interestingly, the book tends to be much more tolerant of modern theologians than their ancient forbears. The earliest Fathers are criticized rather harshly for their inadequacies, while some twentieth-century theologians (who should know better) escape reproof. There is also an irritating tendency to cite from compilations and ‘readers’ rather than from standard translation (see e.g. on Luther).

On the other hand, probably the most useful part of the book is the final ‘Annotated Bibliography’ (119–50) This is probably worth the price of the book alone, and provides excellent brief summaries of the major works throughout church history. In short, this book will be a useful guide for those readers who already have their antennae tuned to some of the major issues involved in the discussion of the doctrine of God, as well as to some of the problems in modern formulations of it.