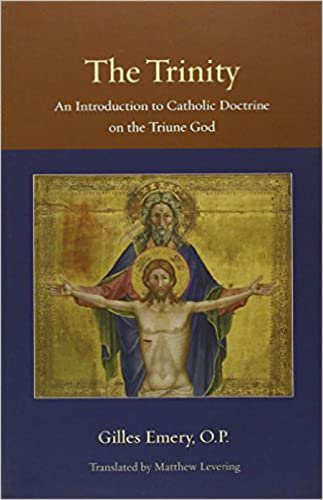 The Trinity: An Introduction to Catholic Doctrine on the Triune God

Gilles Emery, a Dominican priest and professor of dogmatic theology at the University of Fribourg, has established himself in the past decade as possibly the leading authority on Thomas Aquinas' Trinitarianism. His volumes Trinity in Aquinas (Sapientia, 2003) andThe Trinitarian Theology of St. Thomas Aquinas (Oxford, 2007) have quickly attained the status of standard works. In his latest book, The Trinity, Emery's approach is predominantly contemplative, endeavoring “to display the intelligibility that Trinitarian faith possesses” (p. xiii), yet in a manner “oriented toward beatitude” (p. xiv). The volume unfolds through six chapters in which the author focuses chiefly on the foundations of the doctrine, not entangling himself with recent theological currents.

Chapter 1 offers an overture to Trinitarian faith in which Emery, following Basil of Caesarea, notes a twofold path by which we may approach the Trinity: (1) in our experience of saving grace we first encounter the Spirit and then proceed through the Son to the Father (Spirit → Son → Father); (2) in God himself the Father begets the Son and they together spirate the Spirit and, in similar order, in the economy of salvation the Father sends his Son and together they send the Spirit (Father → Son → Spirit) (p. 11). Whichever way we approach the knowledge of the three divine persons, our entry point into the doctrine is through redemptive revelation, not speculative thought. Emery writes, “In the New Testament, the manifestation of the Father, Son, and Holy Spirit is directly connected to the gift of new life by grace” (p. 12).

Chapter 2 sets forth the biblical foundation for the doctrine of the Trinity. Emery is especially keen to point out the “mission” of the Son and Spirit, emphasizing their roles as those sent from and returning to the Father. He finds in the creative and redemptive going forth and return of the Son and the Spirit evidence of their divinity and the revelation, though analogical, of their eternal relations in the Godhead. “It is in the act of the Father, Son, and Holy Spirit that we discover their unity and features proper to each person (their 'properties')” (p. 22).

Chapter 3 explores the proclamation of the Trinitarian faith as it is found in various early confessions, from the NT to the credo of the first Council of Constantinople. Emery explains how and why Christian confessions of the Trinity began to shift from a solely economic focus on the persons' work in creation and salvation to predominantly ontological statements about the eternal mystery of the Trinity in himself. Most notably, the various heresies assaulting the Church's Trinitarian faith forced early Christians to better articulate the ontological foundation for God's three-personed economic activity. This was crucial in order to show that God's subsistence in three persons was not merely a result of his activities in creation and redemption and thus true only by some supposed correlation to the world. “The divine persons cannot be conceived solely in function of their relationship with the created world” (p. 82). Emery's entire discussion of the early Christian symbols, especially of the Nicene-Constantinopolitan creed, offers an intelligent yet easy entrance into the issues that shaped classical Christian dogma.

Chapter 4 delivers a rather detailed treatment of what it is that constitutes a divine person. Emery concludes that it is the inter-Trinitarian relations themselves (paternity, filiation, and spiration) that are constitutive of the persons. He writes, “The divine person is a subsisting relation” (p. 108). Noting the incomprehensibility of this notion, he adds, “The constitution of a person by a relation remains the exclusive prerogative of the divine Trinity, because only in God does a relation 'subsist'” (p. 109).

Chapter 5 weaves together various strands of Trinitarian data into a single doctrinal tapestry. Emery sets the tone for the doctrinal synthesis by observing, “[E]ach time that we direct our attention to a divine person, we consider simultaneously the two others, because the three persons are relative to each other and they are present in each other, both in their innermost being and in their action for us” (p. 111). Readers are treated to several discussions: the Father as the “principle” (not the “cause”) of the Son and Spirit (p. 114) and as the “principle without a principle” (pp. 120-23); the Son as image of the Father and his eternal generation as the intelligible ground of creation (pp. 123-33); and the procession of the Holy Spirit from the Father and the Son (pp. 134-39), with a helpful treatment of the motivation for and principle foundations of the Filioque (pp. 139-49). One of the most striking features of this chapter is Emery's explanation of how it is that there is no passive potency in the relations between the divine persons (pp. 149-50). God is pure act even in his Trinitarian relations!

Chapter 6 concludes the volume by returning to the creative and saving action of the Trinity. Emery shows that the distinct modes of action attributed to the various divine persons is rooted in each one's distinct mode of existence, that is, in the eternal relations of divine person to divine person (p. 163). Though the author expresses heavily qualified sympathy for Rahner's Rule (that the economic Trinity is the immanent Trinity and the immanent is the economic), he rather dislikes the economic/immanent dialectic that it engenders. He prefers instead to speak of the Trinity in himself and the Trinity revealed in the creative and redemptive “missions” of the Son and Spirit rather than of the “immanent” Trinity and the “economic” Trinity (pp. 177-78). For many readers this return to the patristic “missions” model will present a genuine way out of the dialecticism that tends to dominate all sides in modern debates about the Trinity.

Although principally written for interested Roman Catholics, Protestants should find The Trinity to be a sound introduction to a crucial doctrine. Emery's prose is scholarly yet widely accessible, at once traditional and constructive, without being dry or novel.