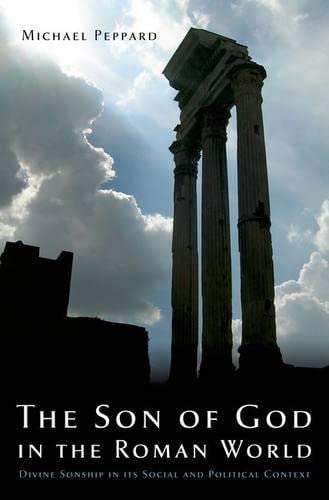 The Son of God in the Roman World: Divine Sonship in Its Social and Political Context

Michael Peppard notes that a metaphor no longer works when its meaning becomes stable and fails to provoke or stimulate the reader. For the great span of the history of the church, the metaphor of divine sonship has lost its original meaning because divine sonship has been situated within the context of “conceptions from elite theological debates of later centuries” rather than within “the Roman sociopolitical environment of the first and second centuries” (p. 3). Peppard critiques the “Platonic” and “Nicaean” hermeneutical framework within which scholarship has, even if implicitly and unconsciously, understood the term “son of God,” and reinterprets the metaphor within the context of Roman father-son relationships. Rather than denoting Jesus' “philosophical essence” or “absolute divinity,” the term “son of God” is best illuminated when understood analogically with the divine sonship of the Roman emperor.

Chapter 1, “Divine Sonship before Nicea,” suggests that NT scholars too often assume the term “son of God” is self-evident and anachronistically use “Platonic” categories such as being/becoming or transcendent/mundane. Alternatively, scholars who use religionsgeschichtliche methods have produced an array of historical evidence, but they too have shortcomings. Wilhelm Bousset simply assumes the title implies metaphysical essence. Martin Hengel unjustifiably dismisses the possibility of the influence of Roman emperor worship. Larry Hurtado minimizes the possibility of non-Jewish influence on early Christology, and he is able to claim that there is no true analogy to the worship of Jesus only by ignoring Roman emperor worship. The method that Peppard prefers draws from religionsgeschichtliche methods, but is less concerned with the origin of a term as much as for its resonance. Thus, “son of God” may have conjured up Davidic ideology for one audience, tales of Greek gods for another audience, and the Roman Emperor for another. Peppard's approach is to examine how the term “son of God” would resonate with a Roman audience, and then ask how “this resonance affects our understanding of the Gospel of Mark and other selected Christian texts” (p. 28).

Chapter 2, “Divinity and Divine Sonship in the Roman World,” examines the transformation in scholarly perspectives on divinity in the Roman Empire. Whereas older scholarship, influenced by Platonic concerns with essence and an over-privileging of elitist literary sources, assumed a total division between the material world and divinity, recent scholarship has argued that divinity “was not an essence but a status-a status honored because of powerful benefactions. . . . When continuous benefactions led to continuous honors, that process could admittedly lead to a kind of ontology-a status solidified because of a god's perpetual benefactions” (p. 35). In other words, divinity is less a matter of ontology as it is of status bestowed upon powerful entities who distribute benefactions. Humans and gods were, then, on two ends of a sliding scale with the possibility for the former to attain divine status provided they demonstrate their divinity through powerful benefactions: “Benefactions were what led to worship, and continuous benefactions led to continuous worship” (p. 40). The premier example of a human who attained the status of god through benefactions is the Roman Emperor.

Chapter 3, “Begotten or Made,” sets forth an alternative framework for understanding the “son of God.” Within the Roman world, adoption was a crucial practice that stabilized family lines by securing a legitimate son to receive one's inheritance. Adoption was, furthermore, a significant mode for “imperial succession, of transmitting power from father to son” (p. 50) for those who did not have natural sons. Peppard emphasizes that adoption was often a privilege of the elite for extending kinship relations, that the adopted son really became the son of the adoptive father, and that the practice could increase the prestige of the father who gained the adopted son's clients. The most significant adopted son was Octavian, whose adoptive father was both Julius Caesar and Jupiter. As the son of a God through adoption, Augustus became “the father of the Roman people, he himself with divine lineage through his adoptive father, and his family would now preside in the fatherly role over the Empire” (p. 61). Through his adoption Augustus “incarnated . . . Jupiter's traditional fatherly role” (p. 62) and became the paterfamilias of the Empire. The imperial adoption of a son was often construed as a divine election whereby the gods declared the divine status of the adopted son of God.

Chapter 4, “Rethinking Divine Sonship in the Gospel of Mark,” asks, “How would a listener more attuned to Roman culture than the Jewish Scriptures have understood” Mark's account of Jesus' baptism (p. 86)? Peppard notes patristic testimony that links Mark's Gospel to Rome and suggests that the “characterization of Jesus can be justifiably construed in the light of Roman imperial ideology” (p. 93). Peppard's thesis is that Mark depicts Jesus' baptism as his adoption by God, a divine adoption where Jesus is made a counter-emperor. Peppard emphasizes that the language of “adoption” should not be understood as indicating a low Christology; rather, given that “adoption is how the most powerful man in the world gained his power” (p. 95), Mark's Christology should be construed as high. Peppard argues that the aorist verb εὐδόκησα consistently connotes “choice” or “election,” and therefore, the phrase from Mark 1:11 ἐν σοὶ εὐδόκησα should be translated as “I have chosen you.” The dove that descends upon Jesus would be understood by a Roman audience as a sign of God's adoption of Jesus as a counter-emperor. Rather than a Roman eagle, the symbol of military might, the descent of the dove shows that “this counter-emperor will not rule in the spirit of the bellicose eagle, but in the spirit of the pure, gentle, peaceful, and even sacrificial dove” (p. 123).

Chapter 5, “Begotten and Adopted Sons of God-Before and After Nicea,” shows how Peppard's examination of sonship in the Roman world “allows us to hear new resonances of divine sonship in early Christianity” (p. 132). Peppard argues that in the first and second century both “adoptive sonship” (e.g., Paul's epistles and Shepherd of Hermas) and “natural/begotten sonship” (Gospel of John) “were used to refer to the divine sonship of Jesus Christ and also to the divine sonship afforded to all Christians” (p. 132). Both metaphors were legitimate means of expressing Christology and soteriology and were interwoven. Starting in the third century with Origen, however, one begins to find a demarcation between the two metaphors: adoptive sonship is true only for Christians and Jesus is emphatically seen as “begotten, not made.” Peppard states this clearly:

Earlier, in the first two centuries, adoptive sonship could be used to symbolize both Christ and Christians, based as it was on the exalted status of well-known adopted sons in Roman society. But by the late fourth and into the fifth century, theologians like Cyril and Augustine would hammer home a different point: stop mixing metaphors. Jesus is God's begotten son by nature; you are all God's adoption children by grace. (p. 171)

There is much to like in this monograph. The method is clear as he seeks to understand how early Christian texts would resonate with audiences; he brings the best of recent scholarship on Roman religion and social practice to his interpretation of the early Christian writings; he provides a strong reading of Mark's Gospel in light of Roman imperial ideology; and he demonstrates convincingly how the originally mixed metaphors of adoptive sonship and natural/begotten sonship were separated in the third and fourth centuries.

Throughout my reading of Peppard, I did, however, have two quibbles. First, while more work has been done to situate Mark's Gospel within a Jewish context, would not many of Mark's readers have been familiar with both a Roman imperial context and the Jewish Scriptures? When the NT writings refer to Jesus as “son of God,” would not many have thought of both the Emperor and the royal son of David? While Peppard is right to focus his energies on accounting for the side that has been underplayed, a richer analysis would have incorporated both contexts. Second, Peppard falls prey to the NT scholarly penchant for using the abstraction of “Platonism” as a foil for his readings. The third- and fourth-century church fathers can no longer, on his read, understand the original meaning of “the son of God” because they are preoccupied with Platonic preoccupations of essence and preexistence. Yet many of the NT writings are indeed concerned with the “ontological status” of Jesus, assert and assume his preexistence, and do not create a false dichotomy between “being” and “function.”

These two minor critiques, however, should by no means detract the reader from engaging with this book. The work is highly readable, engaging, helps to fill a lacuna in our understanding of the term “son of God,” and will serve as an important dialogue partner for my teaching and research.