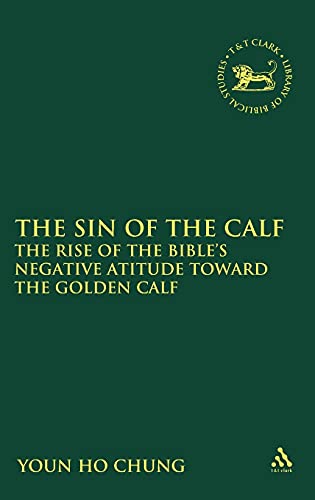 The Sin of the Calf: The Rise of the Bible’s Negative Attitude toward the Golden Calf

When did the OT canon assume its final form? What are the literary interrelationships among the Pentateuch, OT Historical Books, and the OT Prophets? How did Israel’s traditions develop over time? Current biblical scholarship lacks consensus on these questions since it is difficult to identify shared themes or terminology that can be traced across the canonical divisions of the OT. However, the sin of the golden calf is one such motif for its role in Israel’s apostasy at Sinai (Exod 32), the “sin of Jeroboam” in making golden calves at Dan and Bethel (1 Kgs 12), and Hosea’s condemnation of the “calf of Samaria” (Hos 8:6; cf. 10:5; 11:2). In this vein the present book by Youn Ho Chung, a revised 2007 dissertation at Hebrew University of Jerusalem, provides a comparative analysis of the golden calf across the corpora of the OT. Chung’s book is helpful in its exegesis of the relevant texts, but ultimately implausible due to the numerous ways in which he reads against the textual grain and thus reimagines how Israel’s history unfolded.

Chapter 1 provides a history of research on the golden calf. After criticizing past proposals to identify the golden calf as a pagan deity, Chung proposes that the golden calf was originally conceived in Israel not as a foreign god but “as an expression of sacred emptiness, like the Ark/cherubs” (p. 11). In Chung’s view, the golden calf was originally a pedestal in the Judges period for an invisible God at the altar of Bethel, but was later condemned by the Bible when the Israelites mistakenly saw it as an iconic representation of Yahweh. The rest of the chapter lays out Chung’s tradition-critical method that is geared toward supporting this hypothesis.

Chapter 2 briefly treats 1 Kgs 12–13 and the “sin of Jeroboam.” Chung asserts that the worship of the golden calves at Bethel is condemned by the Deuteronomist in order to censure all worship outside Jerusalem. Jeroboam’s apostasy was then used by the editors of 1–2 Kings to judge the Judean kings on the basis of whether they did away with the “high places” (e.g., 1 Kgs 15:14).

Chapter 3 compares the golden calf incident in Exod 32 with the parallel passage in Deut 9–10. Through a somewhat convoluted argument, Chung concludes that Exod 32 derives from a northern Elohistic composition (E) which can be stripped of its polemical elements to reveal that the golden calf was originally viewed in a positive way. In the Deuteronomy account, Chung identifies two tradition layers regarding the calf, an early Deuteronomic layer which is similar to E’s posture toward the calf as one of the “other gods” (cf. Exod 20:3) and a late layer which resembles the rest of the Deuteronomistic literature for its attack upon iconographic worship.

Chapter 4 analyzes Hosea’s condemnation of the calf at Bethel. Chung argues that Hosea, as a prophet to the northern kingdom of Samaria, stands close to the northern Elohistic tradition in its condemnation of the golden calf. Rather than opposing Canaanite fertility region per se, Hosea opposes the national religion of Israel as a syncretistic blend of Yahweh-Baal worship (pp. 121–25) that contained sexually perverse elements (e.g., Hos 4:12–13).

Chapter 5 rehearses scholarly views on Deut 4 as a postexilic composition that resides at the same stage of development as Chung’s Deuteronomistic tradition layer in Deut 9–10. Though such a position is not uncommon among critical scholars, Chung’s speculation goes even further than usual in his assertion that the editor of the Decalogue in Deut 5 inserted a prohibition on making images into the Elohistic version of the Decalogue in Exod 20 (pp. 189–90). In this way the Elohist Decalogue was putatively modified to resemble the Deuteronomic version.

Chapter 6 summarizes the book’s contention that the golden calf was originally part of the cultic apparatus for Israel’s aniconic worship at Bethel. It is important to note that Chung’s argument to this point has been built upon a series of questionable presuppositions. Even judging by the vagaries of tradition criticism, two of Chung’s presuppositions are especially problematic: (1) The golden calf was of exclusively Israelite origin, a view that ignores how the calf was the most common symbol for deity in the ancient Near East and probably arose from Egypt (Jan Assman, Moses the Egyptian [Cambridge: Harvard University Press, 1997], 72, 211–12); and (2) E originally existed as a distinct literary work, a view that has long been doubted even by adherents of Julius Wellhausen’s JEDP documentary hypothesis (see discussion in R. N. Whybray, The Making of the Pentateuch: A Methodological Study [JSOTSup 53; Sheffield: Sheffield Academic Press, 1987], 111–16).