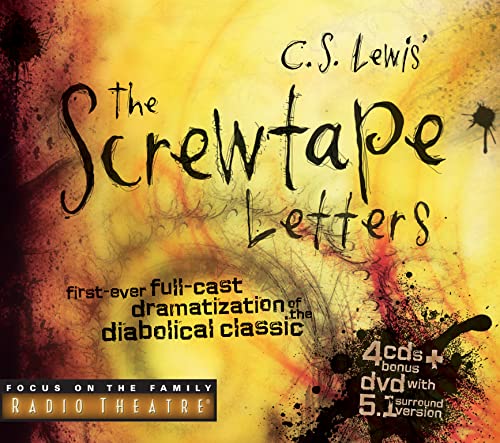 The Screwtape Letters: First Ever Full-cast Dramatization of the Diabolical Classic

Focus on the Family Radio Theatre has produced another first-class dramatization of a classic book. Its most recent production creatively and engagingly enhances C. S. Lewis’s The Screwtape Letters. It is hosted by C. S. Lewis’s stepson Douglas Gresham, and it stars Andy Serkis, who plays Gollum in Peter Jackson’s blockbuster trilogy The Lord of the Rings, as the voice of Screwtape.

The dramatic reading of The Screwtape Letters is 4.5 hours long (including Lewis’s preface and Gresham’s background commentary). It also includes about thirty minutes of ten original songs and forty minutes of documentaries on a DVD.

I listened to the drama twice, first only listening to the audio and second listening while reading Lewis’s original text. The audio does not abridge the text, but it embellishes it—otherwise it would be a monologue since Lewis’s Screwtape Letters consist of thirty-one letters from the senior demon Screwtape to his nephew and apprentice Wormwood. The embellishments include dialogue between Screwtape and his nephew Wormwood, between Screwtape and his servant Toadpipe, and between some of the demons’ human “patients.” Most of the letters end or begin with fabricated scenes set in either hell or London during World War II, and some occasionally skip, rephrase, or otherwise alter small portions. For example, the last paragraph of letter 19 in Lewis’s original is moved to the end of letter 18 in the dramatization. And letter 16 ends like this in the dramatization:

The real fun is working up hatred over styles and approaches to worship: stand or sit or kneel; lower the head, raise one’s arms; traditional or modern music. These issues are an admirable ground for our activities. Without them the church might become a positive hotbed of charity and humility.

That may sound prophetic, but it is somewhat anachronistic. Lewis did not write that, though I suppose it communicates his general spirit.

Lewis masterfully “teaches in reverse” by wryly using demonic points of view to enforce a biblical one. He calls it “diabolical ventriloquism.” Here is a summary of each of Screwtape’s letters that advise Wormwood how to tempt his “patient” (who becomes a Christian between letters one and two):