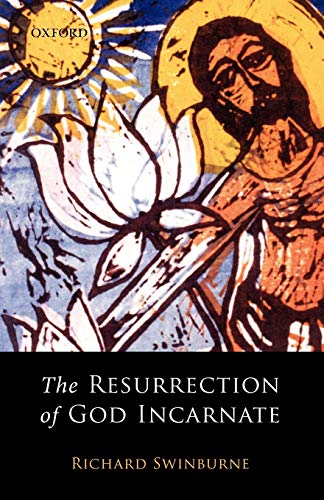 THE RESURRECTION OF GOD INCARNATE

Until 2002 Richard Swinburne was Nolloth Professor of the Philosophy of the Christian religion at the University of Oxford. This book builds on his earlier tetralogy in philosophical theology, which left detailed historical study of Jesus to the experts. Swinburne notes that determining what happened to Christ raises questions, not only about historical evidence, but also about whether there is a God and whether Jesus was uniquely the kind of person whom God would have raised. Since these theological questions are often ignored, a book combining theological and historical analysis seemed necessary.

Swinburne assumes on the basis of his earlier work that the existence of God is at least not improbable and that he can become incarnate. He briefly argues that Hume’s argument against belief in miracles fails. He then considers why God might become incarnate and how this might be shown in a human life. He argues that God would want to become incarnate in order to provide atonement for sin, to identify with his creatures’ suffering, and to provide moral information and encouragement. If God did become incarnate then he would need to lead a certain sort of life. Additionally, God could authenticate and ‘put his signature on’ that life by a clear miracle, such as the resurrection. Conversely, it would be deceptive of God to resurrect someone who lived that sort of life if they were not God incarnate.

He then argues that there is (not necessarily conclusive) historical evidence that Jesus lived a good and holy life, implied his divinity, taught his atonement and founded a church, roughly as might be expected if he were God Incarnate. He considers several objections and relies on mainstream scholarship.

Finally, Swinburne examines the historical evidence for the resurrection itself, the appearances, the empty tomb and the evidence from the early observance of Sunday as the Church’s day of meeting. Swinburne argues that there are no simple alternative explanations of the evidence and so the resurrection can be believed, given that it is not too unlikely that there is a God who would do such a thing.

Swinburne argues that there is no known religious figure apart from Jesus who is a serious candidate for having lived the requisite sort of life and that no other major religion is founded on a purported miracle for which there is comparable evidence to the resurrection. He claims that the coincidence of these two things is very improbable unless God brought it about and that it is very improbable indeed that God would have brought it about if Jesus were not God incarnate; that would constitute deception. The conclusion is that is very probable that Jesus was God incarnate who rose from the dead.

Of course, profound questions remain. The existence of God and the likelihood of his becoming incarnate remain controversial. Could devotion to Jesus have caused mistaken claims about the quality of his life and his rising from the dead to coincide? Might God allow the evidence associated with Jesus to accumulate due to sin and error without being directly deceptive? Nevertheless, Swinburne’s overall argument is robust and justifies taking the evidence for Jesus and his resurrection especially seriously.

Although dense and dry, this book is clearly structured, lucid and full of important arguments and insights. Anyone with a serious interest in apologetics, systematic theology or philosophy of religion should read it.