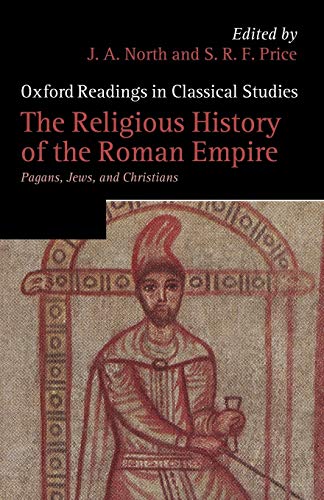 The Religious History of the Roman Empire: Pagans, Jews and Christians

Since readers of Themelios come from varying Christian perspectives, it is worth considering the importance of North and Price’s edited volume, The Religious History of the Roman Empire, in terms of its bearing on biblical and theological studies. The volume in the first instance falls within the genre of classics, but the texts of the Christian NT were shaped by and centered irreducibly within the classical world. There is a need for scholars of biblical and theological studies, therefore, to have at least a cursory knowledge of the classical field. This, sadly, is a rare skill. Christian scholars tend to stick with “Christian” histories, Jewish scholars with “Jewish” histories, and Classicists with “pagan” and Greco-Roman histories (see, e.g., p. 1). This is in some measure a simple byproduct of the University’s division of labor. Perhaps, too, owing in part to hangovers from the Religionsgeschichtliche Schule, there is a reticence in some quarters of biblical studies to engage in the religious milieu of the Roman Empire. In this approach, the primary “background”—an unfortunate word—is Judaism, and if any recourse is made to classical history or religions throughout the Empire, it is done so by highlighting the distinctive monotheistic texture to the Judeo-Christian confession or the odd statement about the Emperor cult. This approach is unfortunate in that it is guided by the colonial (arrogant?) assumption that cultures can be so neatly parsed into Jewish, Christian, and Pagan. Though it must be maintained that there were elements of distinctive identity in these sets of practices, these practices were entangled with one another. From the second century b.c., onward there was massive migration within and around the Mediterranean owing to long-distance merchants, traveling military, economic migrants, and itinerant professionals. Cities “came to contain communities speaking different languages and inheriting different traditions, including religious ones” (p. 2). Owing in part to the movements of locally enlisted soldiers, conquest relocations, and the economic factors produced by these movements, “radically different groups and ideas in contact with one another had produced new ideas and new vocabulary as well as new practices” (pp. 3–4). Another tendency within some spheres of biblical studies is to see “Caesar” behind every bush and to fit early Christianity with an empire-sized whipping stick. This approach misses the layered realities of identity affirmation and negotiation within the complex realities of imperial administration.

The study of the religious history of the Roman Empire, however, has gone through a kind of “revolution in our way of thinking about the subject” (p. 3), and the collection of essays in this volume attempt to document these developments. This “revolution” has taken place on five broad fronts:

These developments are traced through and ordered by four sectional divisions:

The essays selected in this volume have all appeared in print before (see pp. 562–63 for their original publication details) and were selected for their significance and impact upon the field. All the essays are worth reading, but of particular interest for this readership might be Jörg Rüpke’s essay on issues of method (pp. 9–36), Richard Gordon’s essay on the Imperial Cult (pp. 37–70), Nicole Belayche’s essay on hypsistos (pp. 139–74), Giulia Sfameni Gasparro’s essay on mystery and Oriental cults (pp. 276–324), Philip Harland’s essay on acculturation and identity in the Diaspora (pp. 385–418), Martin Goodman on the variety of first-century Judaism within Josephus (pp. 419–34), Judith Lieu’s excellent essay on “The Forging of Christian Identity and the Letter to Diognetus” (pp. 435–59), and Averil Cameron on discourses of female desire (pp. 505–30). There is also a helpful section on further reading (pp. 564–71).

All in all, this is a remarkable resource for gaining a general sense of the religious diversity and complexity within the Roman world. A good weekend alone with this collection of essays will prove valuable in terms of situating the rise of early Christianity within the complicated cartography of Roman religious history.