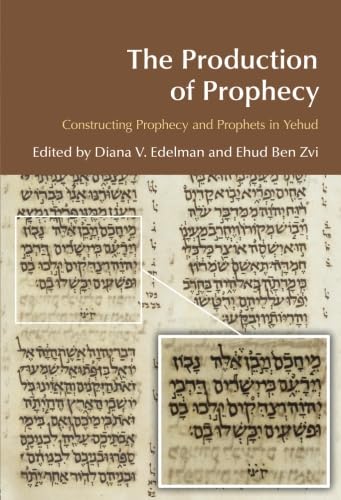 The Production of Prophecy: Constructing Prophecy and Prophets in Yehud

This volume contains essays that originated in the 2006 and 2007 work of a study group of the European Association of Biblical Studies entitled “Israel and the Production and Reception of Authoritative Books in the Persian and Hellenistic Periods.” As the group’s title suggests, its purpose is specifically “to advance knowledge about the process or processes that led to the production of the prophetic books” (p. 2). The editors’ intention is not to produce a homogenous viewpoint but to encourage dialogue, and the volume’s contributors disagree on some points (noted below) while agreeing on the benefit of studying prophecy as a written phenomenon and on the importance of the social role and recognition given to prophets by their community.

In his first essay, Ehud Ben Zvi further develops his suggestion that texts were reread by the returned exiles who constituted the Jewish community in what had become the Persian province of Yehud. He argues that the Pentateuchal, prophetic, and so-called Deuteronomic books (Joshua–Kings) were formed at roughly the same time and that they influenced one another through their being constantly reread by the community responsible for all these biblical corpora. Ben Zvi’s second essay attempts to clarify further the social setting in which prophetic books would most likely have been generated, settling on Jerusalem before it attained social, political, economic, and religious prominence in the Persian period (p. 83).

Diana Edelman argues in her first essay that while prophets were the recognized divine spokespersons during the monarchic period, the disappearance of the monarchy eventually made prophetic books the vehicle for the divine voice. Since Judah is not the only nation to have had prophets associated with a monarchy that eventually lost its independence through military defeat, Edelman puzzles over why Judah was the only nation for which such prophetic sources are extant.

P. R. Davies considers the origins of the book of Amos, assuming that historical circumstances account for the book’s production. While there is surely a link between the message of Amos and the future events it foresees, Davies spends little time considering its potential rootedness in eighth-century Israel, preferring instead to see it as testifying to Jerusalem-Benjamin tensions in post-exilic Yehud.

Rainer Albertz explores the role of public reading in the production of prophetic literature. Taking Deutero-Isaiah (Isa 40–55) as a case study, he “imagines” that its first edition was completed in 521 and recited by prophets who wanted to “convince the hopeless Judeans that God would now offer them a wonderful new chance of salvation . . . [and] tried to encourage them to start organizing a new beginning, and wanted to induce them to accept repatriates from Babylonia and elsewhere” (p. 105).

E. Gerstenberger examines the genesis of the prophetic books in relation to (cross-cultural) spirituality during the Persian period and looks for the “discourse” that reveals the Judeans’ “system of knowledge and values” (p. 113). He presents as topics for further investigation several potential parallels between the prophetic books and aspects of their Zoroastrian context: prophetic dialogue as divine-human communication (their “basic structures are closely related” [p. 117]); antagonisms and absolute dualisms (which post-exilic Jewish thinkers used “for their own purposes” [p. 121]); and the eschatological or apocalyptic perspective which Gerstenberger is confident was adopted by the biblical writers from the ancient Iranians (p. 121). Concluding that the Persian period was “the formative era” for prophetic books in post-exilic Judah (p. 126), he also calls for new paradigms in which to explore the formation of the prophetic books, the role of the community in that process, and the relationship between the Pentateuch and the prophetic books.

Axel Knauf holds that the book of Kings is a product of the Persian period because of its redaction history and because he finds the issues it addresses (Which temple is legitimate? Whose is the land?) best suited to that period. For Knauf, Kings is historiography that is also “part and parcel of the Prophets” (p. 144), and he explores a number of subtle but important themes in Kings, underlining the many doubts it raises in the reader’s mind as to the success of Israel’s history. He strongly rejects any relevance of the Torah for the period after Josiah’s “discovery” of it and argues that all biblical law is post-exilic (pp. 141–43). As a corresponding point, he suggests that the appearance of Deuteronomy spelled the end of prophecy and argues that “the establishment of a canonical book of revelation [Deuteronomy] is incompatible with a barely controllable institution of spontaneous announcement by the god(s) that might supplement, abrogate or otherwise endanger the authority of the book” (p. 143). He concludes that this “‘Abrahamic’ canonical process” continued through to the Qur’an (p. 145).

In her second essay, Diana Edelman explores many of the ambiguities in the book of Jonah before considering its place within the Twelve (Minor Prophets). She argues that the ambiguities prompt the book’s readers to reconsider their views of God’s nature and will. Jonah’s location after Obadiah and before Micah has long puzzled interpreters, and Edelman accepts Nogalski’s argument for various catchwords that link Jonah to Micah in order to argue that the LXX order (Jonah–Nahum) “is older and more original” than the order preserved in the Hebrew Bible and translations based on it (p. 161). She ends by reflecting on the implications of Jonah’s atypical form and content for the Twelve.

Two essays dealing with the formation of Jeremiah conclude the volume. Thomas Römer soberly explores its connections with the Book of Kings, while Rannfrid Thelle considers the book’s role as a source of authority once the Judean king was removed from the scene. Thelle argues that Jer 26–29 and 36 are intended to authorize “contact with YHWH” in this new scenario.

Although they develop some new insights as to the way that prophetic literature was transmitted or formed in the early post-exilic period, these essays also illustrate several widespread convictions in the critical study of biblical prophecy: the origins of prophetic books must be tied to historical circumstances that produced them; exilic and post-exilic Judah’s Babylonian and Persian environments influenced the content of the books authored in those settings; and there is a more recent tendency to date the composition of most biblical books to the Persian period. The varying confidence that the authors have in their conclusions is noteworthy: while some recognize the imaginative nature of their historical reconstructions, others see their findings as essentially certain. In the latter case, more interaction with viewpoints that differ from the trends noted immediately above would have permitted more nuanced conclusions and the recognition of alternate reconstructions of the historical realities in general and of the formation and dating of the prophetic books in particular. This collection possesses significant value but should not be viewed as presenting the only approach to these issues.