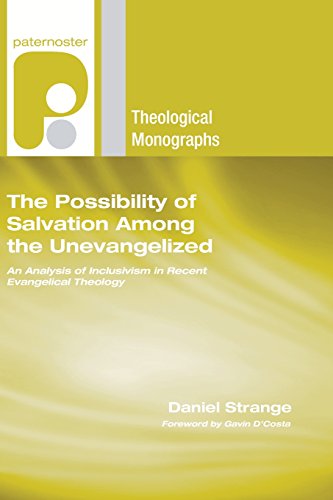 THE POSSIBILITY OF SALVATION AMONG THE UNEVANGELISED

Daniel Strange, who teaches at Oak Hill Theological College in London, has written an important, closely-argued book on one of the most important theological topics being disputed in the evangelical world today: what happens to those who live and die without having heard or understood the message of the gospel of Jesus Christ? By no means is this a new question for Christian theology, but it is being debated with renewed vigour within the evangelical community and Strange does an excellent job of conceptualizing the discussion and analyzing the thought of one of the leading exponents of the indusivist position. This book originated as a doctoral dissertation at Bristol University, and was completed under the supervision of the noted Roman Catholic theologian, Gavin D’Costa. He commends this study as ‘one of the best comprehensive surveys of this debate’, and refers to its author as ‘one of the sharpest and most able of his generation writing in England’. High praise but not over the top for a book so incisive and well thought out.

Strange accomplishes three things in this study. First, he reviews the state of the question of the unevangelized in recent evangelical theology. He identifies three theological strands, each of which could well be sub-divided further: the Reformed/Calvinist tradition (the position with which Strange identifies), the Arminian tradition, and the Postconservative Evangelical tradition. The most extensive discussion of the fate of the unevangelized has taken place within this third strand, and Strange devotes a major part of his study to unpacking the thought of one of its leading representatives, the Canadian Baptist theologian, Clark Pinnock.

Pinnock is well known for being a theologian in process (though not a pure process theologian), and Strange places his writings on this theme in the context of his wider pilgrimage. Many of the ambiguities Strange painstakingly uncovers in his analysis of Pinnock’s thought stem from Pinnock’s desire to affirm both God’s universal salvific will for all persons, and the finality of Jesus Christ as the world’s only Saviour. Strange carefully places Pinnock in the context of the wider debate, comparing his ideas not only with other evangelicals but also with Roman Catholic theologians, notably Karl Rahner, many of whose ideas were incorporated into Roman Catholic teaching at Vatican II.

Perhaps Strange’s best contribution is to show how, by embracing a more inclusive view on the fate of the unevangelized, Pinnock has perforce precipitated a major shift in other key doctrinal areas. For example, in depicting the role of the Holy Spirit as the decisive agent in the salvation of the unevangelized, what Strange calls ‘pneumatological inclusivism’, Pinnock has been forced to adjust the historic evangelical understanding of the relationship between the second and third members of the divine Godhead. Likewise, the doctrine of justification by faith alone, the penal substitutionary understanding of atonement, and even the Reformation doctrine of sola scriptura are all subjected to revisionist thinking. In other words, contrary to his best intentions, Pinnock has not been able to mediate the axioms of particularity and universality without major—and to Strange’s mind, very damaging—adjustments in Christology, Trinitarian theology, soteriology, and the doctrine of biblical revelation.

While Strange offers a stout Reformed critique of Pinnock’s position, he does applaud him for putting the issue of the salvation of the unevangelized on the table and for engaging with this issue at a level unequalled by most other evangelical thinkers. Strange may be right to claim that the fate of the unevangelized is not so much a ‘problem’ for those who come to the issue with strong Reformed presuppositions (about election, particular redemption, radical depravity, etc.), but there are a cluster of issues even Reformed theologians need to think through more clearly than has yet been done. What about the salvation of those who die in infancy, or those who remain mentally incompetent? What about those who claim (many converts from Islam, for example) to have received a call to Christ and salvation through a vision or dream without the ordinary means of verbal witness or written word? What about those orthodox theologians, notably Zwingli in the Reformation, who have held that God’s election perhaps includes individuals outside the ordinary channel of salvation history, even notable pagans? Strange is not unaware of these issues, and refers to them briefly (usually in footnotes), but they deserve more serious reflection still if the position argued for in this book is to be sustained.

An extra bonus in this volume is an appendix of some forty pages in which Strange provides the most definitive typology to date of evangelical responses to the fate of the unevangelized. Among those who argue for what Strange calls ‘positive agnosticism’ on the issue are Alister McGrath and John Stott. both of whom claim that the most Christian response to this issue is to leave the unevangelized in the hands of the God of infinite justice and mercy who, at the end of the day, will be shown to all to have done right by everyone. Strange joins John Sanders, a major inclusivist thinker, in claiming that such a view, while emotionally satisfying, is intellectually inadequate in that it relieves the tension on the issue without paying the theological price. At this point, however, it would be well to remember that theology is a modest science and to recall this statement from the Westminster Confession of Faith (5:3), which Strange quotes elsewhere: ‘God, in his ordinary providence, maketh use of means, yet is free to work without, above, and against them at his pleasure’. To do otherwise would seem to call into question another fundamental axiom of both sound Reformed theology and biblical faith: the absolute supremacy and sovereignty of God.