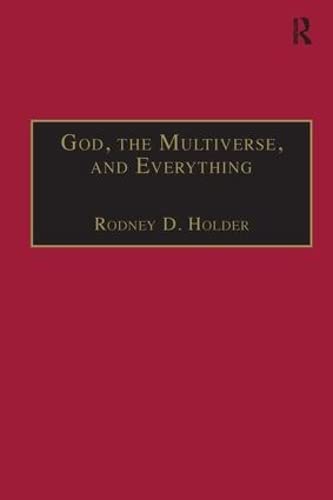 GOD, THE MULTIVERSE, AND EVERYTHING: MODERN COSMOLOGY AND THE ARGUMENT FROM DESIGN

The Rev. Dr Rodney Holder, a physicist-turned priest, has produced a fascinating book. He argues that modern cosmology suggests that the universe is designed and so points us to a ‘Designer’.

He stars by examining the modern scientific account of the origin and evolution of the universe. Much ground is covered in a readable and accessible way He maintains that the main contours of the big bang theory are ‘remarkably assured’ (27) though the periods of the Planck era (less than 10-43 seconds and the Grand Unification Theory ear (less than 10-32s after creation) are speculative. He then moves on to consider ‘cosmic fine-tuning’.

According to the anthropic principle human existence depends critically upon the fine-tuning’ of the universe. Holder examines six examples of fine-tuning relating to physical constants and six relating to initial conditions. For example, if the election: proton mass ratio was other than 1:1836 then the size and length of the dna helix would be altered in such a way that it may not be able to replicate.

He suggests that these cosmic coincidences are no accident and that the theistic hypothesis can explain them. The problem for the naturalist is to avoid the inference of design. Chapter 4 examines six ways in which naturalists have attempted to do just that. They include denying that there is anything to explain; Hawking’s contention that ‘there is nothing for a Creator to do’; there are multiverses, so it is not surprising that one of them can support life; and the idea that we are created by aliens—which solves nothing, it merely pushes the problem one stage back: who created the aliens?

Holder suggests Bayesian probability as a means of comparing these alternatives. This technical chapter is smattered with equations that might daunt the theologian, but it is worth persevering with, particularly as Bayesian probability is being increasingly used by philosophers of religion.

One response to this fine-tuning is that it has a natural explanation that we can’t understand at the moment—and so Holder examines one possible naturalistic explanation, inflation. He provides a useful historical and scientific overview before examining some of its problems including the fact that it needs fine-tuning to work!

The book contains five technical appendices, a useful glossary of symbols and scientific terms, a nine page bibliography and a six page index.

Holder concludes that the only viable hypotheses to explain fine-tuning are the multiverse hypothesis and theism. The various problems with the multiverse hypothesis reduce its prior probability and likelihood, leaving only the Cosmic Designer of theism as a possible explanation of fine-tuning. This of course raises the question of whether we can prove God’s existence. As a neocalvinist I would maintain not; as one Christian philosopher once said, ‘Whatever can be proven would not thereby be God.’ Not everyone would agree with Holder’s conclusion; however, he has produced an intriguing, important and novel work—I know of no other work that deals in such depth with the issue of the multiverse and design.