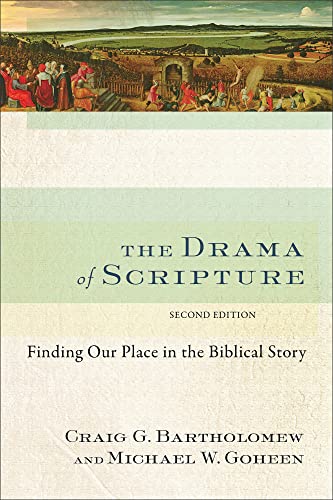 THE DRAMA OF SCRIPTURE: FINDING OUR PLACE IN THE BIBLICAL STORY

In the last several decades, narrative has risen to prominence as a useful category in both theology and biblical studies. This began with the rise of narrative theology and was found in biblical studies mainly in analyses of narrative portions of Scripture. With the publication of Richard Hays’ The Faith of Jesus Christ in 1983, narrative became an interpretive tool across the range of biblical genres, which is only appropriate given that this is a fundamental category for human identity and cultural transmission.

The present work by Bartholomew and Goheen is an attempt to read the Bible as a single coherent narrative. Whereas the last two hundred years of critical biblical scholarship has highlighted the diversity within the Bible, our authors emphasize its unity, comparing it to a cathedral with various features that become ‘different doors from which we can gain a perspective on God’s whole stunning revelation’ (24).

The compulsion for this project comes from the conviction that unless Christians are constantly renewed by the meta-narrative of Scripture, their worldview(s) will be shaped by the various viewpoints up and running in contemporary culture, and that these worldviews will then be the grid(s) through which Christians read Scripture. The result of this is that Scripture will be seen as endorsing various worldly viewpoints that, if the Bible were to be heard with clarity, would instead be exposed as ungodly (19–72).

The organizing concepts of the biblical drama are the themes of covenant and kingdom, both of which ‘alert us to God as the great king over all, who wants to have a people living under his reign and spreading the fragrance of his presence all over his creation’ (25). They rightly note the polemical nature of the creation account in Genesis (31–32), while also claiming that it is designed to inform us as to God’s purposes for creation and our place in it. They skillfully steer clear of getting into debates about the nature of the days in Genesis 1 (32), and eschatological time-tables (207–213), while also emphasizing their basic importance in the biblical plotline. Their account of the nature of the fall into sin is very brief by comparison to other acts in the drama, but it is satisfying pointing to one of the important features of this work: its being thorough while also managing to carry the reader along. It never gets bogged down in unimportant discussions, nor does it linger too long so as to lose the reader’s interest. Their discussion if the ‘already/not yet’ Pauline tension is one of the clearest and simplest anywhere (188–91) and their treatment of the mission of the NT church, moving into some application for contemporary ecclesiastical life, is quite compelling (195–206).

This work is a welcome resource for undergraduate courses on worldview or introductions to Christian theology, but will also greatly benefit anyone interested in coming to grips with the central impulses of the narrative of Scripture.