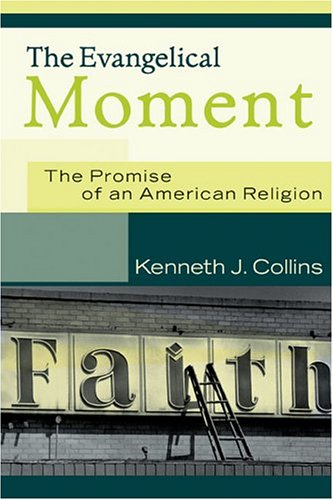 THE EVANGELICAL MOMENT: THE PROMISE OF AN AMERICAN RELIGION

The Evangelical Moment succeeds in presenting a clear account of the various forms and traditions to American protestant Evangelicalism, including their relationship to non-evangelical movements. Readers may also benefit from the perspective of Collins’ distinctly Wesleyan voice, Collins charts a way forward for Wesleyans with respect to their stance on Scripture as well as conversion. He also issues a challenge to, as well as a defence of, Evangelicalism with regard to its engagement with ecumenism, politics, and feminism.

Collins provides his readers with helpful introductory matters in the first three chapters. He gives brief summaries of various forms of evangelicalism. What unites these groups are their four key emphases: 1) Scripture as normative, 2) Christ atoning work; 3) the necessity of conversion, and 4) an emphasis on evangelism. While few evangelicals world dispute any of these distinctives, one may ask if they go far enough. For example, what of Roman Catholics (or protestant mainliners) who hold to these four ‘evangelical distinctives’? Furthermore, whose view of Scripture (or the atonement) qualifies as evangelical? Collins makes the common claim that the reigning definition of biblical inerrancy (as found in the doctrinal statement of the Evangelical. Theological Society) originates not in early Christianity but in the Scottish common sense realism of Old Princeton Seminary, Collins, however, believes that 21st century evangelicals are ready to move beyond this view of the authority of the Bible. Having finally broken free from the shackles of foundationalism and modernity’s emphasis on propositional truth/revelation, evangelicalism appears to be ready to embrace a more biblical view of the Bible. He notes that close to 40% of evangelical theologians have abandoned belief in inerrancy. While Collins is certainly correct to note the need for a fuller and more robust evangelical articulation of Scripture, undoubtedly many (if not the majority of) evangelicals will claim that the present definition on inerrancy is derived from the early church fathers as well as from Scripture itself.

With respect to politics, Collins attempts to steer a middle way between the Scylla of the Religious Right and the Charbydis of complete withdrawal from the political arena Collins is encouraged by evangelical leaders such as Jim Wallis and Ron Sider—specifically concerning their call for evangelicals to embrace the gospels’ concern for the poor and destitute.

The most controversial discussion is Collins’ treatment of evangelicals and feminism Collins is hopeful that evangelicalism will fully embrace the view of women as presented by such biblical passages as Galatians 3:26–28. Collins’ discussion is helpful in its clarification between the varying beliefs of traditionalists, neotraditionalists, feminist evangelicals, and quasi-egalitarians. Collins makes the interesting claim that gender inequality is the sharpest in two main groups: sacramentarians (Roman Catholics and Eastern Orthodox) and inerrantists (some evangelicals and most fundamentalists). While Collins’ treatment of this issue is helpful and provocative, it remains to be seen whether evangelicals will overturn 2000 years of church history which has largely denied ordination to women.

Collins has provided an excellent discussion of some of the most significant issues facing the complex entity of evangelicalism. Though readers will certainly take issue with some of Collins’ bold diagnoses and solutions, one cannot help but be challenged by his optimistic and insightful call for evangelicals to rise up and take hold of The Evangelical Moment.