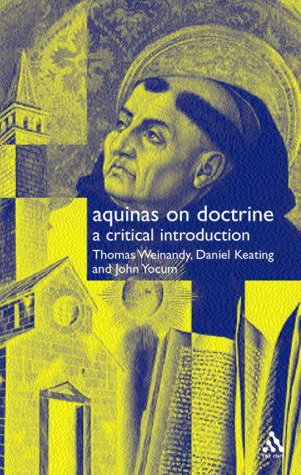 AQUINAS ON DOCTRINE: A CRITICAL INTRODUCTION

In 1879, Pope Leo XIII called for renewed study of St Thomas Aquinas in response to modern, anti-Christian philosophies. This led to a revival in Thomistic study in Roman Catholic circles, but principally concentrated on his use of philosophy. Discussions of Aquinas’ theology tended to remain academically demanding and unavailable in English. Fergus Kerr’s forward claims that the present work offers a creative, critical and scholarly appreciation of Aquinas’ theological doctrine, highlighting its continuing relevance. Christopher Baglow argues that Aquinas’ exposition of sacred doctrine is formed and grounded by his understanding of Scripture. David Burrell argues that Thomas’s doctrine of creation draws on platonic and Arabic philosophy while transforming it, so that creation can be said to emanate from and participate in God’s goodness, while remaining the product of his free will. Gilles Emery contends that Aquinas’ Trinitarian doctrine is central to his understanding of both creation and salvation and organises his theology as a whole. Thomas Weinandy explains how Aquinas’ doctrine of the incarnation centrally involves a mixed relation between human and divine natures in the one person of God the Son. Despite the fact that Thomas may deny it in all but one place, Weinandy argues that his orthodoxy requires him to affirm that Christ’s human nature has a secondary, created esse. Michael Dodds examines the ways in which Aquinas believes Christ’s human nature to be unlike that of other human beings. Studying Aquinas’ doctrine of salvation, Romanus Cessario explains how Thomas understands redemption as a divine art of gracious goodness, restoring perfecting the image of God in humanity Daniel Keating uses Thomas’s biblical commentaries to show how he Preserves both divine initiative and human response in salvation. John Yocum examines how Aquinas’ sacramental theology portrays God as using material means to allow humans to worship. Matthew Levering argues that Thomas saw Eucharistic liturgy as the fulfillment of human history and locus of divinization. Drawing on disparate sources, Thomas offering no systematic treatment, Herwi Rikhof argues that Thomas’s ecclesiology has contemporary resonance. Matthew lamb explains how Thomas saw Christ as the goal of all rational and material creation, while Aidan Nicholls examines how Thomas’s understanding of the Virgin Mary fits with his reflection on the incarnation.

Readers should be warned that the ‘critical introduction’ subtitle may mislead, and many essays here are neither introductory nor particularly critical. Though the authors are clearly aware of possible objections, they spend relatively little time discussing them. Weinandy complains of modern theology’s tendency to downplay Christ’s divinity out of concern to safeguard his humanity, but Dodds offers little comment on whether Aquinas’ view sufficiently safeguards Christ’s humanity. The authors show how Aquinas attends to Scripture, but usually do not explain how evangelical and modern critical objective might be met. Most assume familiarity with Thomistic philosophy. For example, despite being one of the most accessible essays, Weinandy introduces the question of whether Christ’s human nature has an esse without any explanation. Many of the essays outline a particular thesis rather than attempting an introduction to the literature. This increases the interest of the collection to scholars of Aquinas. but will disadvantage those looking for an accessible introduction to his theology. These caveats aside, these essays will be of considerable interest to intermediate and advanced students seeking to appreciate the doctrine of one of the West’s most influential theologians.