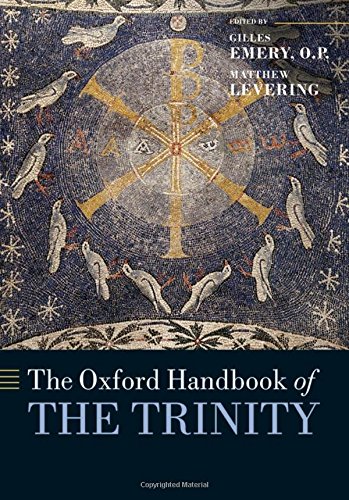 The Oxford Handbook of the Trinity

The Oxford Handbook of the Trinity constitutes a major achievement, even in a market flooded with Trinitarian volumes. Editors Gilles Emery and Matthew Levering have assembled forty-three chapters grouped into seven sections:

Contributors herald from the Orthodox, Roman Catholic, and Protestant traditions and for the most part represent the more conservative viewpoints of those respective traditions. Though the chapters vary in quality and rigor, as might well be expected in such an expansive collection, most are quite high quality. Some survey a particular area of Trinitarian study (historic or contemporary), while others are more polemical, and still others truly constructive. Each contributor is well apprised of the relevant literature on his or her topic, and each chapter includes a bibliography that will doubtless prove useful should readers desire to pursue further research.

In their introduction, Emery and Levering orient readers to the volume’s most recurring themes, pointing to certain fundamental features common to the diverse currents of contemporary Trinitarian enquiry. Among these the historical-mindedness of many modern Trinitarian theologians is most outstanding, and indeed historical studies are particularly dominant in this volume. The editors write,

What one means by ‘Trinitarian faith’ can hardly be understood outside of reference to the councils of Nicaea and Constantinople and to their reception: the doctrine of the Trinity is indissociably connected to the reading of Scripture through the ecclesial and theological traditions, with the result that the development of Trinitarian theology today appears generally as a creative reappropriation of the patristic and medieval sources. (p. 3)

Obviously, this review cannot attend in detail to the particulars of such a wide-ranging volume. Thus, a few of the outstanding contributions will be noted as well as a few criticisms offered.

In Part 1 (chs. 1–6), Khaled Anatolios (ch. 1) makes the intriguing observation that though the doctrine of the Trinity was developing at the same time the early church was wrestling with questions about the canon, no piece of biblical data for the Trinity was challenged on the basis of its canonicity. Christopher Seitz (ch. 2) boldly argues that the literal sense of the OT requires a Trinitarian understanding when its deliverances are properly grasped “in the light of Christ, as conveyed by the Holy Spirit” (p. 38). C. Kavin Rowe, Simon Gathercole, and Ben Witherington III offer useful discussions (chs. 1–3) of the Pauline corpus and Hebrews, the Synoptic Gospels and Acts, and the Johannine Literature. While each does a fine job of highlighting the Son’s divine status, more could have been done to differentiate this from Jesus’ status as “Son of God” in the probationary sense as second and last Adam, that is, according to his humanity.

In Part 2 (chs. 7–10), Stephen Hildebrand’s treatment of the pre-Nicenes (ch. 7) forthrightly acknowledges the erroneous and confused elements propounded by some of these early writers, yet he is careful to spotlight the genuine insights and advances made during this period, especially by Irenaeus. J. Warren Smith’s piece (ch. 8) provides a brief overview of the fourth-century fathers that amazingly avoids superficiality given the space allotted such a massive topic. His chapter warrants repeated readings.

In Part 3 (chs. 11–15), Dominique Poirel (ch. 12) charts the proliferation of Trinitarian analogies and the emergence of the doctrine of “Trinitarian appropriations” in the twelfth century, while Joseph Wawrykow (ch. 13) compares and contrasts Bonaventure and Aquinas, in particular their differing accounts over what constitutes the personhood of the Father. Russell Friedman (ch. 14) examines competing late-medieval models—one based on relations and the other on emanations—for explaining the constitution of the divine persons. Karl Felmy (ch. 15) recounts the Eastern Church’s reasons for rejecting the Filioque clause.

Part 4 (chs. 16–24) considers the Trinity from the Reformation to the present and is generally less interesting than the patristic and medieval discussions. Mostly this is due to the absence of major dogmatic advances during this period. Ulrich Lehner’s article (ch. 17) highlights anti-historical and anti-speculative tendencies that began to plague the confession of the Trinity in the modern era. His is an instructive and cautionary chapter. George Hunsinger’s study of Karl Barth (ch. 21) is enlightening, especially for understanding Barth’s hard dialectical distinction between the “immanent Trinity” and “economic Trinity.” One wonders if this dialectic might not partly account for the modern evangelical trend to draw a hard distinction between God’s essential being and his being in relation to creatures. Fergus Kerr (ch. 24) argues that modern analytic philosophy has not yet made a significant contribution to Trinitarian theology, though one wonders why such an observation is worthy of an entire chapter.

Part 5 (chs. 25–32) is chalk full of excellent dogmatic contributions. Kathryn Tanner’s piece (ch. 25) should go some distance in curing the murky-mindedness that often plagues Christians’ understanding of the relationship between biblical exegesis and a Trinitarian approach to reading the Scriptures. Her chapter should be read as prolegomena to Part 1 of this volume. Rudi Te Velde (ch. 26) offers a stout challenge to prevailing univocal understandings of the term “person” when said of God, insisting instead upon its analogical sense. While avoiding subordinationism, Emmanuel Durand (ch. 27) proposes a “paternal theocentrism” as a more biblical way to approach the Trinity than the currently popular filial theocentrism. Thomas Weinandy (ch. 28) argues that persons of the Trinity are not so much nouns as they are verbs, acts subsisting in relation to one another.

Parts 6 (chs. 33–39) and 7 (chs. 40–43) are overall the most disappointing in the volume, though not without a few noteworthy contributions. Geoffrey Wainwright’s discussion of the Trinity in liturgy and preaching (ch. 33) should convince church leaders that expositing the Trinity’s glory in the preaching, praying, and singing of the Church has historically been the most useful way to instill Trinitarian knowledge in the Christian layperson. Francesca Murphy’s study (ch. 37) illuminates how different aspects of prayer (invocation, meditation, and intercession) tend to focus the Christian alternatively on God’s unity and his plurality. Nonna Harrison (ch. 38) argues persuasively against feminist tendencies to replace the names of the Father and Son with feminine alternatives, and Frederick Bauerschmidt (ch. 39) critiques abuses in both Richard Niebuhr’s and the modern social Trinitarians’ models for relating the Trinity to politics. In their conclusion, Emery and Levering helpfully propose eight directives for the future of Trinitarian theology.

This volume should prove to be a great boon to those engaged in Trinitarian studies as well as to Christians more generally.