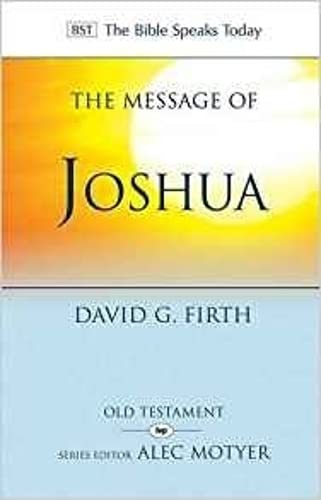 The Message of Joshua: Promise and People

“We should begin by noting the elephant in the room.” Thus boldly does David Firth begin his book, under the heading “Joshua and the problem of violence” (p. 19). He then proceeds to address head-on the challenges posed by the “new atheism,” especially Richard Dawkins, who speaks of “bloodthirsty massacres” and “xenophobic relish” in the book of Joshua (p. 19).

In this way, readers can immediately see what this book is and what it is not. It is not a commentary in the traditional sense. So, for example, the introduction does not discuss the normal issues in a commentary, not even covering the book’s main themes (or else simply limiting his discussion to two; see below). Rather, its two sections deal with the aforementioned problem of violence (pp. 19–25) and “Reading Joshua today” (pp. 26–30). But the Bible Speaks Today series does not claim to be a commentary; it has three goals, as indicated in the Series Preface: (1) “to expound the biblical text with accuracy”; (2) “to relate it to contemporary life”; and (3) “to be readable.” This entry in the series by Firth succeeds remarkably well in all three of these.

The book is nevertheless “commentary-like,” in that it does go through the entire book of Joshua section by section, and it does take the message of Joshua seriously (per the book’s title). Firth includes a three-page “Select bibliography” of respected works on Joshua, and he regularly engages selected conversation partners. (He honors my own commentary on Joshua by including it among these.)

For Firth, the message of Joshua is primarily the outworking of two main themes: (1) the land of Canaan belonged to Yahweh, not the Canaanites or the Israelites, and (2) it was Yahweh’s gift to Israel, which was a much more inclusive group than simply the blood descendants of Abraham. So, the first idea allows Firth to counter critics’ objections that Yahweh simply stole the Canaanites’ land and gave it to Israel. No, it belonged to Yahweh alone and, when the Canaanites opposed him, he would use his people Israel to punish the Canaanites. But the issue gets complicated, as Firth observes, when we realize that “Israel,” a community of faith, included a number of Canaanites, such as Rahab and her family (Josh 2) as well as the Gibeonites (Josh 9), and conversely, that the Israelite-born Achan suffered the fate of the Canaanites (Josh 7). By the end of the book, “The nation . . . clearly included native-born Israelites who had continued to worship other gods as well as Yahweh, native Canaanites who had joined Israel, and perhaps others” (p. 25). Firth thus shows that the book is much more nuanced than the popular imagination has it, where a bloodthirsty god unjustly destroyed innocent foreigners in favor of his own chosen people. Rather, the book shows a generous, welcoming God who desired that all peoples, Israelites and Canaanites alike, should embrace him.

True to the series’ goals, Firth continually engages modern culture and attempts to make relevant applications of the book’s message to contemporary life. In service of this, he mentions such things as ordering something online (p. 43), the 1915 Anzac defeat at Gallipoli (p. 53), taking his children for a walk on the Kokoda Track Memorial Walkway in Sydney, Australia (p. 60), the movie Dead Poets Society (p. 64), Charles Colson and Richard Nixon (p. 68), a chapel service he once attended (p. 99), his work in Zimbabwe (p. 146), Charles Dickens’s Bleak House (p. 205), and more.

But, these are not simply illustrations as resources for sermons. Firth uses them in a winsome way to invite readers into the sometimes-difficult text of Joshua. Firth is a respected scholar—the author or editor of many books and articles on Old Testament topics and lecturer in Old Testament at St. John’s College, Nottingham—and each section of this book expounds the text of Joshua in helpful ways. To his credit, Firth does not give short shrift to the chapters in Joshua on the land distributions (chs. 13–21), as many commentaries do; he devotes more than 50 pages to these, unpacking their meaning in a clear manner.

Firth also regularly refers readers to New Testament points of contact, as well as modern-day applications, and he clearly has a heart for the living God revealed in Joshua. One quote will have to suffice to illustrate this; commenting on God’s fulfillment of his promises in 21:43–45, he concludes, “Taking God at his word, then as now, leads to doxology, while also challenging us to ask whether the promises have indeed become reality in our own experience” (p. 193).

I was enlightened, entertained, challenged, and blessed as I read this book, and I recommend it highly.