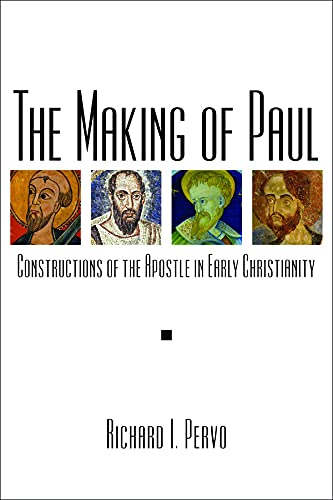 The Making of Paul: Constructions of the Apostle in Early Christianity.

In this book Richard Pervo, who is perhaps best known for his work on the book of Acts, brings forth reflections on the Apostle Paul that have matured over more than thirty years of teaching and research. The book surveys portraits of Paul in early Christian texts from the undisputed Pauline letters to the writing of Irenaeus (approx. a.d. 50–180). The title of Pervo’s book signals two of his points of emphasis. The first is that early Christians made “Paul.” The Paul we know is Paul as he has been represented to us. (Pervo repeatedly compares Paul to Jesus in this regard.) Yet Paul was depicted in different ways—hence Pervo’s second point of emphasis: we have been left with varied constructions of the apostle. As Pervo states in the preface, “The thrust of the following pages is toward defining profiles of Paul and Paulinism in terms of the needs, questions, and values of the persons, groups, or movements represented in various texts” (p. xii).

A brief preface is followed by a meandering introduction, which looks at the “major limbs of the [Pauline] tree” while the rest of the book inspects the “twigs and leaves” (p. 20). The bulk of the introduction explicates Pervo’s creedal outline of Paul’s portrait, featuring Paul as apostle, evangelist of the entire world, redeemed sinner, sufferer and savior, and teacher.

The object of the first chapter is to show how Paul became a book. After some introductory comments on letters and letter collections, Pervo lists a number of editorial activities that he believes were involved in the creation of a collection of Paul’s letters. He then provides examples of these editorial activities, tracing a general movement in early Christianity to universalize Paul’s letters. The chapter culminates in his thesis that an editor in Ephesus around a.d. 100 put together the first edition of Paul’s seven undisputed letters. This editor, according to Pervo, was probably responsible for the compilations of what we now know as 2 Corinthians and Philippians. Although different editions appeared and the collection continued to grow, Pervo asserts, “from the early second century onward, Paul was encountered as a book” (p. 61).

As with any other scholarly hypothesis, Pervo’s account is only as strong as his supporting evidence, and much of his case in this first chapter appears to rest on anachronism and speculation. For example, Pervo cites textual variants of Rom 1:7 and 1:15 as evidence of Paul’s followers making his letters more general. The slim textual evidence Pervo cites for this editorial activity, though, runs as late as the tenth century. It is difficult to see how this evidence illuminates any editorial activity that may have been occurring (or not) in the first century. If the generations immediately after Paul wanted to universalize Paul’s message by changing his letter addresses (among other changes), the textual evidence indicates that their endeavors were neither widespread nor successful. Furthermore, Pervo’s first chapter does not contribute new arguments for his critical positions, such as the partition theories of 2 Corinthians and Philippians or the supposed interpolations in 1 Cor 14:33b–36 and 1 Thess 2:13–16. Pervo dramatically underplays the importance of Paul’s ipsissima verba that survive in his letters and overplays his claim that “the Pauline letters that have come down to us represent Paul as some early believers wished him to be received and understood” (p. 2). In other words, even when working from the critical stance that only the undisputed letters of Paul are “authentic,” it is misleading in many ways to call the epistolary Paul a construction of early Christianity.

The next three chapters are organized according to genre. Chapter two examines what Pervo takes to be the pseudepigraphic Pauline letters: Colossians, Ephesians, 2 Thessalonians, the Pastoral Epistles, 3 Corinthians, Laodiceans, Alexandrians, and the Epistles of Paul and Seneca. Pervo makes comments about the contents, theology, and portrait of Paul in each work. For Pervo these pseudepigraphic letters use the figure of Paul to stabilize or protect Christian communities. While Pervo’s discussion of the authorship of the canonical Pauline letters assumes and helpfully summarizes previous critical scholarship, once again it introduces no new argumentation to the debate. Pervo has already stated that he does not wish to “impugn” the canonical text (p. 38; cf. pp. 5–6), yet he offers no comments on what contemporary Christians should do with the six Deutero-Pauline letters’ preservation of Paul’s heritage. Pervo’s work is descriptive and studiously avoids the theological and ecclesiological implications of his conclusions.

The third chapter seeks to show “the continued vitality of Paul’s techniques and views in the second century” (p. 148) by examining the epistolary tradition in early Christianity. Pervo reviews Hebrews, James, 1 Peter, 1 Clement, the letters of Ignatius of Antioch and Polycarp of Smyrna, 2 Peter, and the letters of Dionysius of Corinth. The fourth chapter surveys Paul in various narrative texts from the canonical Acts of the Apostles to the Pseudo-Clementines, with many others in between. Pervo declares, “The portraits in these narratives vary considerably, from the hero portrayed in the canonical Acts to the villain of the Pseudo-Clementine tradition” (p. 184).

The book then turns to a thematic analysis. A shorter fifth chapter (only 12 pages) is somewhat mistitled, “Other Representatives of Anti-Paulinism.” It posits that the author of the Gospel of Matthew (especially in 5:17–20) is “a critic of Pauline theology” (p. 190). Almost all of the other authors and works mentioned in this chapter, however, are either “non-Pauline” or make use of Paul without mentioning his name. As Pervo himself concedes, “silence about Paul is not, in and of itself, grounds for proposing anti-Paulinism” (p. 198). Pervo, however, could have made more careful distinctions between not citing Paul, not viewing Paul as an authority, and being anti-Pauline. The sixth chapter surveys Paul’s place in the thought of Marcion, various second-century Gnostics (including Valentinus and Ptolemy) and Gnostic works, and Irenaeus. The common denominator among these is that Paul is viewed as a theologian in the formal sense and his writings as texts to be exegeted.

A stimulating, though again meandering, conclusion restates many of Pervo’s main points. Pervo presents Paul as “the foundational figure of what would become normative Christianity” (p. 237), but as a complex figure, an apostle who died in the pursuit of unity but who has often been the apostle of disunity. In an appendix Pervo presents a helpful diagram of the “Pauline family tree.” The book includes a substantial bibliography, 76 pages of endnotes, and indexes of primary sources and modern authors.

As this book is a fairly comprehensive survey, its greatest strength is also a weakness: it is a first-rate introduction to early Pauline reception, but the sheer number of texts considered precludes in-depth analysis. Readers of Themelios probably will not share Pervo’s critical positions, but there is much here to provoke thought and debate. In the end, a lot seems to hinge on an assumption Pervo expresses in the preface: “The portraits of Paul that emerge in early (and subsequent) Christianity do not arise from any concern to preserve history for the benefit of subsequent investigators; they seek to address the problems of those churches in their own times” (p. xiii). One could challenge the application of this to the self-portraits of Paul preserved in what would become the NT. Yet even for first- and second-century extra-canonical texts, we may ask, “Is this a false dichotomy?” It seems appropriate in this early period to speak not only of the ways in which early Christians constructed Paul but also of the ways in which he was remembered.