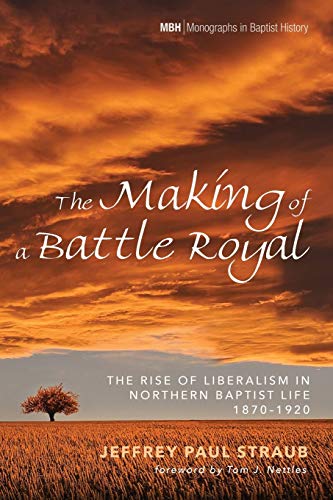 The Making of Battle Royal: The Rise of Liberalism in Northern Baptist Life, 1870–1920

The buildings are grand. In now-faded images, the trees are tall and blooming. The picture of Rochester Theological Seminary in the early twentieth-century is one of confidence, ambition, and solidity. Here is a school, the campus says, that will endure and make inroads for the kingdom of God. The northern Baptists were ascendant, and schools like Crozer, Colgate, and Chicago pursued a similarly heady course.

Fast forward 100 or so years. Today, neither Crozer, nor Rochester, nor Colgate stands on its own. In a strange twist of conglomeration, the three schools are one, though each seeks to preserve its unique heritage through the affiliate designation: Colgate Rochester Crozer Divinity School. According to online sources, the school has about 90 students.

Curious minds can only wonder: what happened to northern Baptists as a movement—once an empire on the rise, now a marginal religious presence in America? We find many of the answers in The Making of a Battle Royal: The Rise of Liberalism in Northern Baptist Life, 1870–1920. Jeff Straub, professor of Historical Theology and registrar at Central Baptist Theological Seminary, built the present volume off of his doctoral research under historian Michael Haykin. Battle Royal fits well with ongoing scholarship on Protestant liberalism. Straub’s book stands alongside the previous publications of Gary Dorrien (with his trilogy on liberal theology), Richard Wightman Fox (particularly his work on Reinhold Niebuhr), and Gregory Wills (his history of Southern Seminary includes several essential chapters on C. H. Toy and others).

Battle Royal shows, in sum, that the pyrotechnics set off by Harry Emerson Fosdick in the 1920s were prepared decades before. They took shape in the place where ministry—sound or unsound—is often incubated: the seminary. Though this sturdy text is academic in tone and format, I was gripped in my own analysis of the text by how urgently missiological Straub’s academic scholarship is. Because of this modern-day relevance, I now list three principles I identified in Battle Royal that speak not only to the settled past, but the unsettled present.

First, everything depends upon the doctrine of Scripture. Over and over again, we see that the first doctrine the liberal leaders reenvisioned was that of bibliology. In the mind of this mold, the text is sacred but not inerrant. Witness William Newton Clarke, who made the sly argument that poring over the Bible led to just this view: “[T]he Bible itself, upon examination shows me that it is not a book infallible throughout, in which error does not exist” (p. 105). That is, the serious student of Scripture finds that Scripture does not want its students to be so theologically serious. Then as now, Christians were encouraged to doubt the Bible, but not to doubt those who doubt the Bible.

Bibliology was the first doctrinal domino to fall, but many fell after it—a propitiatory atonement, an exclusivistic call to Christ on the mission field, a commitment to expository preaching. The church became a social change agent, committed to a gently Marxist vision of economic uplift in the Rauschenbuschian form. “Soul salvation” was out; social betterment was in. Over time, the church’s mission mirrored that of progressive politics until the two essentially merged.

Second, conservatives only woke up to the true threat of liberal theology when it was too late. The Baptist movement in general was ripe for just the sort of plucking that occurred in this period, for the Baptists of the north had not lashed themselves to confessions. The New Hampshire confession provided some basis for theological mooring, but the liberal theologians merely worked around it, employing “double-speak” and shrewd words (pp. 16, 264). In general, the liberal leaders proved far, far more cunning than the conservatives. They organized against protests from the right; they gave public affirmations of Baptist pieties that mollified the masses; they networked and hired and corresponded like crazy.

These insights matter for today. Then as now, conservatives are often better at building individual ministries, led by a singularly gifted figure, while liberals are often better at laying the institutional groundwork for wholescale takeover that proves impossible to dislodge. By the time Bible-loving northern Baptists woke to the threat of their eclipse, it was too late. They were in checkmate. Contra the stereotype—the canard, in some cases—of the “fighting fundamentalists,” the conservatives, in point of fact, often wavered in the face of doctrinal compromise. Division and massive ecclesial change came because of one group and one group alone: the liberals.

Third, the church needs theologians and pastor-theologians who together promote sound doctrine. Perhaps the saddest figure we encounter in the text is A. H. Strong. He is the strangest of characters: he held to a form of Reformed doctrine but hired Walter Rauschenbusch, giving the latter a priceless platform for his social gospel (pp. 147–50, 229–34). This type, the conservative who wants to be friend to all parties (ala Clarence Macartney), is perhaps the most bewildering type of leader found in the fundamentalist-modernist controversies of the 1920s.

Such sad examples remind us that the great need of our own age is men who will lead churches and seminaries and colleges with personal warmth, doctrinal conviction, and confessional fidelity. God has called men to be the theological leaders of the home, church, and the teaching institutions of his body. This is the need of the hour. We read Straub’s study for scholarly purposes, but the scholar or pastor who loves the church cannot read it in a detached way. The northern Baptists let the fire ebb on their watch. Will we?

The verdict on liberal Baptist theology is in. It bankrupted schools, closed countless churches, and shuttered many missions outposts. This is not opinion; it is fact. Sound doctrine brings life. Unsound doctrine steals it away. We see this in the 19th and early 20th centuries, when liberalism entered grand buildings and teeming classrooms. Over time, it left them empty, collecting dust on an elegant hill, a “For Sale” sign placed discretely by the road.

In so many places in America, churches must compete with one another, block by block, for members. The burden is a terrific one for pastors and church planters. But in the north, and particularly the northeast, a different burden predominates. There, one can drive for miles and not encounter a Bible-loving assembly. Strangely, much of this territory is not unchurched, at least historically. Much of it is burned-over. In the northeast, in New England, sound doctrine once ruled the roost. Now, it is buried and gone, the old white churches of the past increasingly a relic of disbelief, a block of condos, the neighborhood’s newest gastropub.

It was not always so. Once, the northeast pulsed with spiritual activity. Once, the gospel rang out from a thousand sound pulpits. Then the liberal theologians came. They took over churches. They infiltrated the seminaries. They won the battle royal. Through their church-weakening, Bible-undermining teaching, they wrote ICHABOD over the doorways of their schools and churches. The historical questions surrounding the decline of the northern Baptist movement have clear and cogent answers. The real question for us today—those of us who love Christ’s church like nothing else on earth—is this: Will anyone come and speak a better word?

Owen Strachan is assistant professor of Christian theology and church history at Boyce College in Louisville, Kentucky, and executive director of the Council on Biblical Manhood and Womanhood. His PhD dissertation is entitled Reenchanting the Evangelical Mind: Park Street Church’s Harold Ockenga, the Boston Scholars, and the Mid-century Intellectual Surge; (Trinity Evangelical Divinity School, 2011), completed under the supervision of Douglas Sweeney, John Woodbridge, and George Marsden.