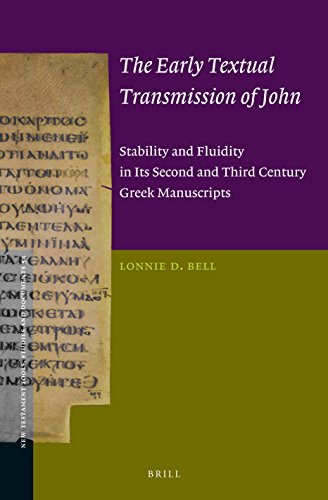 The Early Textual Transmission of John: Stability and Fluidity in Its Second and Third Century Greek Manuscripts

New volumes in the NTTSD series, edited by Bart D. Ehrman and Eldon J. Epp, are cause for celebration among those who enjoy critical studies that advance the fields of New Testament Studies and early Christian origins. Granted, books of this kind are rarely gripping. But this one may be among the exceptions.

Lonnie Bell, lead preaching pastor of Four Corners Church in Newnan, GA, and recent PhD graduate from the University of Edinburgh, is not a household name even in those few households familiar with the names of New Testament textual critics. But not all New Testament textual critics have as strong a claim as Bell does to enhance our understanding of the transmission of the Gospels in the early centuries of the Christian tradition. What does Bell argue, and how is it different from the current consensus?

“It has been widely claimed or accepted among New Testament textual critics,” Bell begins, “that the earliest centuries of textual transmission for the texts that now comprise the New Testament were characterized by ‘freedom,’ ‘fluidity,’ ‘instability,’ ‘laxity,’ ‘proneness to error,’ ‘carelessness,’ ‘wildness,’ ‘chaos,’ ‘lack of control,’ etc.” (p. 1). Indeed, this academic consensus maintained by scholars often masquerades without challenge as unimpeachable wisdom.

Not so fast, says Bell. What if this general depiction is wrong? What if the early centuries were not marked by major alterations? What if copyists did not exercise considerable freedom in changing texts? What if stability, continuity, and strictness are better characterizations of the early textual transmission of the New Testament?

The issues at the heart of this volume come into sharp focus when he analyzes each manuscript and diachronically compares the number and character of unique (singular and sub-singular) readings in each manuscript with all majuscules up through the seventh century that completely overlap with it. The bulk of the book is devoted to such meticulous scrutiny of the evidence (pp. 34–225). Bell covers his subject matter with admirable thoroughness. He anticipates and parries the most obvious critiques, such as the occasional limitations regarding certain bodies of evidence from which he is drawing conclusions. Bell persuasively argues that none of the earliest extant manuscripts he studied revealed anything other than continuity in transmission with subsequent centuries. Indeed, the opposite was true. There was remarkable stability in the transmission of these texts. Variation was relatively minor. There was a propensity towards precision in the transmission of these writings.

What, then, is likely to be accomplished by this study? Bell has written a wonderfully rich book, packed with evidence. Part of what makes his argument so persuasive is the way in which he combines and compares the evidence from earlier and later periods. The evidence is compelling, and it impels us to look more closely at the general characterization of New Testament textual transmission up to the fourth century. His major contribution is his conclusion that the second and third centuries were probably not a time of significantly more instability than later centuries. Instead, he argues, the character of transmission reflected in the earliest manuscripts of the Gospel of John points to a more striking stability and impressive continuity with later periods than previously acknowledged or asserted.

The reader comes away from this volume persuaded that there is strong evidence pointing in the direction of Bell’s conclusion. But the questions of how far this applies beyond his database of one New Testament book—a point he strategically notes and even emphasizes—are far from settled. Nevertheless, his study provides a helpful guide to what the future might hold for determining that extent and more confidently answering such questions. Anyone planning to deal with this topic going forward should keep this book handy, and every theological library should own a copy.