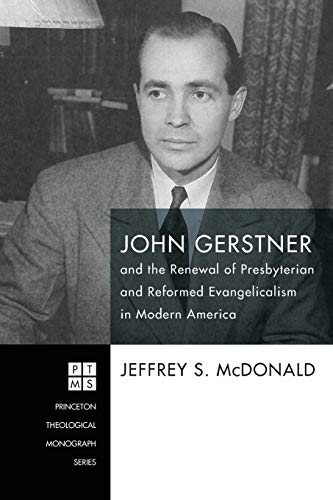 In John Gerstner and the Renewal of Presbyterian and Reformed Evangelicalism in Modern America, Jeffrey S. McDonald argues that John Gerstner played a significant role in the development and expansion of a Reformed subculture among 20th century evangelicals. McDonald finds Gerstner to be “astonishingly overlooked” in both American Presbyterian history and the wider literature of American evangelicalism (p. 11). McDonald’s volume, an adaptation of his University of Stirling dissertation supervised by David Bebbington, offers a corrective to this trend and an early contribution to Gerstner studies.

McDonald weaves two story arcs throughout the book: Gerstner’s life and ministry and the trajectory of post-WWII American Presbyterianism. In this sense, McDonald’s volume is similar to George Marsden’s Reforming Fundamentalism, though Marsden uses Fuller Seminary as a lens through which to understand Neo-Evangelicalism, whereas McDonald uses Gerstner as a lens through which to understand the renewal of Reformed theology in America. Throughout an introduction and eight chapters, McDonald provides a chronological account of Gerstner’s life and evaluates his importance to American religion (p. 2).

McDonald demonstrates that much of Gerstner’s later thought was forged in his early days of study at Westminster College (under the tutelage of John Orr), Westminster Theological Seminary, and Harvard University. Gerstner’s lifelong theological distinctives—championing Old Princeton theology, safeguarding inerrancy, and advancing evidentialist apologetics—were “cemented” in these early days, especially through Orr’s influence (p. 49). Gerstner’s teaching career began in 1950 and carried on for over four decades. McDonald highlights the theological tension Gerstner faced among his Presbyterian brethren throughout his ministry and denominational service. He summarizes Gerstner’s teaching, speaking, and writing goals well: “oppose theological liberalism, promote Reformed theology within evangelicalism and the UPCUSA, defend rational apologetics, and use Jonathan Edwards and the Old School Princetonians to achieve the first three objectives” (p. 106). Because of his conservative views and strong personality, Gerstner often found himself in the middle of theological and denominational skirmishes. One colleague quipped, “don’t get into a debate with Gerstner … he will win even if he’s wrong” (p. 196).

McDonald emphasizes two key elements of Gerstner’s life: his promotion of Jonathan Edwards and his influence upon the infrastructure of American evangelicalism. Gerstner’s decades-long fascination with Edwards helped spur evangelical interest in the American colonial theologian. McDonald demonstrates why Gerstner is an important figure in the renaissance of Edwardsian scholarship, even if Gerstner’s legacy is checkered on the topic. Gerstner was Edwards’s megaphone to post-WWII evangelicals (p. 129).

If Edwards had a profound impact on Gerstner, Gerstner too had a profound impact on many evangelical leaders, schools, and institutions. From his mentoring of R. C. Sproul (and his later affiliation with Sproul’s Ligonier Ministries), to teaching at Trinity Evangelical Divinity School, to helping establish the International Council on Biblical Inerrancy, John Gerstner was an “evangelical dynamo” (p. 106). Two strengths that fueled Gerstner’s influence were his pointed speaking style and his ability to write in effective ways for lay audiences. These skills allowed him to play a “leading role” in the Reformed evangelical movement (p. 212).

McDonald’s volume is an important contribution to the history of American Presbyterianism and the broader evangelical movement. He reclaims Gerstner as not only a figure deserving of attention in his own right, but a figure who is vital for a proper understanding of the emergence of Reformed convictions and sympathies in a variety of evangelical denominations, schools, and movements. McDonald shows that Neo-Evangelical theologians (whom Gerstner supported in the pages of Christianity Today and counted as theological comrades) were not the only thinkers combatting theological liberalism. Gerstner was as well, and he in the context of a mainline denomination suspicious of his views.

McDonald’s volume is balanced. He is appreciative of Gerstner’s ministry and yet offers critical remarks where necessary, especially regarding Gerstner’s weaknesses as a historian and interpreter of Jonathan Edwards. The reader gains a sense of Gerstner’s “resilience” and “persevering spirit” in the face of professional, scholarly, and denominational disappointments (p. 199). As the book contains numerous Presbyterian acronyms and cites them throughout (often without reference), readers acquainted with American Presbyterian history will track with the terminology easier than readers unfamiliar with the terrain. Still, this does not harm the book’s readability and is understandable considering Gerstner’s historical context. Scholars and students of American evangelicalism will find the book to be an important contribution that addresses a blind-spot in American evangelical research. Interested pastors will find in Gerstner a model of how to communicate complex ideas in an engaging way to their congregations.

Overall, John Gerstner and the Renewal of Presbyterian and Reformed Evangelicalism in Modern America is a worthy assessment of Gerstner’s life and legacy. It provides a cogent and compelling account of the man who, despite numerous setbacks and marginalization, provided “the necessary energy that has led to the expansion of Presbyterian and Reformed evangelicalism” in America (p. 212).