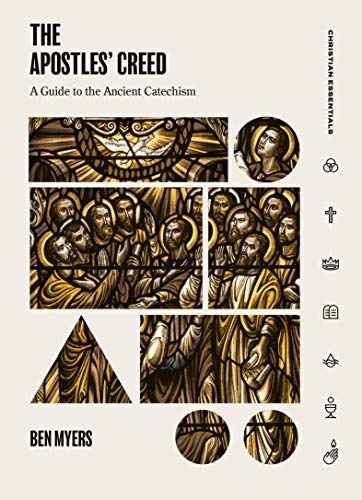 Ben Myers deftly presents an inviting, expository journey through a familiar document of the Christian faith in his recent work The Apostles’ Creed: A Guide to the Ancient Catechism. Whether you have grown up reciting the Apostles’ Creed weekly or came to it academically as a theologian, pastor, or lay-person, this short volume is certainly weighty enough to become your field guide. Myers, an Australian professor of theology, literature, and philosophy, research fellow at the Centre for Public and Contextual Theology at Charles Sturt University, and director of the Millis Institute, composes his work from a personal background of academia, causing this book to read with more depth than an average trade publication on the topic might. However, despite its academic credentials, the writing is accessible and tight as Myers loads each word with maximum gravitas so as to say as much as possible in the small space allotted.

The content itself is an easy to follow exposition of the Apostle’s Creed text. The book first divides the larger Creed into thematic articles then tackles the individual ideas. Sometimes a whole phrase, at other times a single word, the chapters use this episodic framework to delve into theological and scriptural issues raised by each portion. This model allows for the one of the greatest strengths of the work as Myers retethers each phrase to its context in historical theology. Myers’s approach is a welcome response when the typical Christian of today would rarely consider the fact that each phrase was carefully selected to speak to real issues being raised at the time of its composition and compilation.

One historical theology example Myers illuminates involves the line “He ascended into heaven and is seated at the right hand of the Father.” While this seems like a simple declaration of a literal reading of scripture, the book points out that many dualist heresies and the teachings of Marcion had made it their mission to dissect the miraculous and spiritual from the physical (pp. 87–89). The ascension of Jesus created problems for all of these groups for different reasons. Yet, those holding to the orthodox stance on the union of God and man bound inseparable in the figure of Jesus chose to go on record in defense of a literal ascension and a return to full glory, honor, and power alongside God the Father in the form of this seemingly simple line.

The writing is brief and succinct to the point that at times the reader is left wanting more on a certain thought or idea. For example, early in the book Myers references that early Christians were baptized naked but then proceeds to awkwardly avoid commentary on this point and chooses instead to maintain his laser-focus on the theological implications of the act rather than the sociological questions of the reader (pp. 1–2). Yet despite this effort to contain so much inside the confines of the series format Myers writes with vivid imagery that welcomes the modern reader into the mind of the ancient Christian who is literally living out the words of the creed in real time.

Perhaps due to the effort to keep the work connected to the historical context or perhaps instead to keep it short, alternative interpretations or arguments against elements of the creed are not exposed to their full potential. For example, did Christ descend into a literal hell or someplace else, and what are the ramifications of this doctrine (pp. 79–84)? Myers instead focuses more on the original intent of the document coupled with the scripture and tradition used to compose it. In many ways, the creed is taken at face value with a quiet assumption that the reader has a favorable view of the creedal theology.

If I began the book with moderate expectations due to my familiarity with the creed itself and my skepticism towards Myers’s brevity, I noticed that my interest and speed of reading picked up momentum with each passing page. I wanted to know more, and this hunger kept me scurrying madly towards the back cover. The series preface claims to be producing volumes that pass down “tradition that matters” (p. ix). As I personally write from a Baptist perspective, I have been rewarmed to a document that my tribe has often avoided simply because it bears too much the smell of tradition and creedal austerity. Myers presents the creed instead as simple, theological truths, rooted in a defense of scripture and doctrine that were summarized and standardized to help early believers stand firm in the face of persecution, heresy, and insult. In this way, Myers opens an illuminating door for all who would sit at the feet of the earliest church fathers and be reintroduced to the simple, distilled truth proclaimed by the Apostles’ Creed.