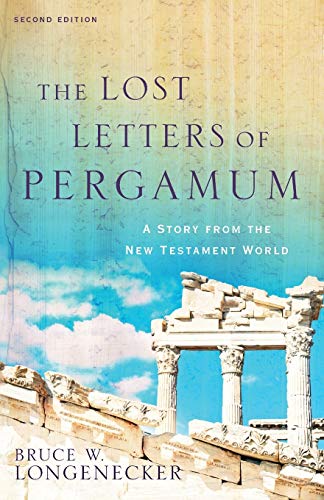 THE LOST LETTERS OF PERGAMUM

Many of us have found Gerd Theissen’s book The Shadow of the Galilean a particularly enjoyable and illuminating way into understanding the first century world of Jesus. it is a fictional story based on history. Bruce Longenecker, who teaches at St Andrews University, offers something similar in this fictional correspondence between Antipas, a leading citizen of Pergamum, and Calpurnius, a leading citizen of Ephesus. Calpurnius has Luke, the Christian doctor, in his household. Luke has written his gospel, a copy of which is sent to Antipas, who the enters into a correspondence with Luke.

Through the story and the correspondence we are given a lot of information about: (a) the Graeco-Roman culture of the day, with wealthy patrons and citizens vying for honour through their beneficence, with the emperor cult being increasingly influential, and with criminals and other being viciously killed in the arena for public entertainment; (b) the Palestinian context of Jesus as described in Luke’s gospel; (c) how the Christian church may have been in places like Pergamum and Ephesus—meeting in homes, facing religious challenges (e.g. from the emperor cult), and offering a very different world-view to that of the non-Christian world.

The book will be particularly useful to those beginning NT studies and wanting to get into the NT world. I am not sure if the picture of Luke living in a non-Christian household and having a relaxed intellectual correspondence with a well-placed and non-Christian quite rings true to me, and I wonder if the churches in places like Ephesus were so like informal fellowship groups (with no structured leadership to start with; 1 Thess. 5:12, 13). Baptism and the Lord’s Supper were very important in the early church (unlike some modern fellowships), but don’t feature significantly in the book, and the struggles the first Christians had over questions of sexual morality are hardly reflected in the correspondence.

But to say that the book doesn’t tell us everything (e.g. about Roman army, about sport, etc.) does not detract from its readability or its valuable insights.