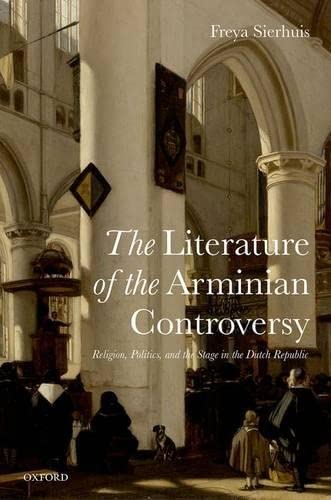 The Literature of the Arminian Controversy: Religion, Politics and the Stage in the Dutch Republic

The question at the heart of Sierhuis’s study should catch the interest of students interested in religious toleration in the post-Reformation period: Was the 17th century Dutch Republic characterized by conflict or consensus? Sierhuis rejects any distinction between Dutch “high culture” and a Grub Street-like literary underground (p. 9), asserting, rather, that the two scenes went hand-in-hand. Sierhuis chronicles a Dutch Republic that stood out among its Protestant neighbors for fostering the popular consumption of theology. Unlike England, where even the most basic doctrinal issues would have been censured from discussion without permission, the decentralized character of Dutch political life forbade any division between “establishment” and “underworld,” resulting in the volatile public sphere where the debates of the Arminian controversy played out (p. 10). An open literary culture ensured the enduring legacy of the controversy in its increasingly rabid debate over religious toleration, since “all appeals to a fundamental consensus, moderation, and fraternal love were articulated through a rhetoric of toleration which, paradoxically, functioned almost invariably to increase tension and to exacerbate enemy stereotypes” (p. 17).

For Sierhuis, the Arminian controversy (1609–1619) made a lasting impression on the Golden Age of Dutch literary culture, epitomized in satirical works like Samuel Coster’s Iphigenia (1617) and Joost van den Vondel’s Palamedes (1625). The Republic’s muscular apparatus for polemical print, combined with its uncommonly high literacy rate, produced an abundance of popular polemicists who simplified and appropriated the ideas at the heart of the Arminian controversy. So, Hugo Grotius’s cautious plea for moderation in the Ordinum Hollandiae et Westfrisiae pietas (1617) became a plea for full toleration by more overtly heterodox personalities, who sympathized politically with the Remonstrants. Contra-Remonstrants draw on the genre of Geuzenliederen (“beggars’ songs”), songs used to paint the Dutch as God’s elect nation during the Reformation, to envisage themselves as fighting the good fight in the Republic’s long reformation—combatting, in this instance, not Catholics but Arminians. Biblical drama sent brazen political messages about political leaders, whether Maurits of Nassau (Samson) or Johannes Oldenbarnevelt (Ahab). Pamphlets of satire and lament surround the events of Oldenbarnevelt’s execution and the conclusion of the Synod of Dort, events which intermingled in the public eye. Many Remonstrants, faced with the decision either to sign the ‘armistice treaty’ or to face exile after Dort, choose the latter. “Inevitably,” Sierhuis says, “the repression of the Remonstrants generated its martyrology” (p. 170). Amsterdam still roiled with pamphlet warfare over liberty of conscience in 1630. As Remonstrant ideas recurred across media and genres, they were simplified, even amplified. Sierhuis, then, is not mainly concerned about religious controversy, but about what happened when the complex ideas at the heart of the Arminian controversy got thrust outside the protective layers of ecclesiastical, political, and academic authority, into the stew-pot of the Republic’s heady literary culture.

Students of Anglophone ecclesiastical history will be interested in a particular example of this phenomenon, the respublica Hebraeorum motif, derived from the Remonstrant Petrus Cunaeus’s 1617 book of that title. There, Cunaeus held up ancient Hebrew polity as the model of republican governance for the Dutch “New Israel.” Though previous Dutch historians took the motif of the Republic as the “New Israel” at face value, Sierhuis cites a growing tendency in current accounts of the period to identify the Republic as the “New Israel,” not as a unifying meta-narrative of national identity, but as a narrative that exacerbated deep religious and political divisions. The motif did this, she says, by enforcing the appearance of religious consensus when, in fact, the Republic was torn between “radically different visions of church, state, and society” (p. 116). Throughout, Sierhuis shows “how fraught the transfer of ideas from author to author and from medium to medium really was, and how this exchange of ideas was liable to mistakes, misreadings, and strategic appropriations” (p. 261).

Sierhuis challenges several scholarly deficiencies. First, she addresses a theological deficiency, common in political accounts of the period, by analyzing Arminius’s theology, with the aid of his leading present-day interpreters (Stanglin, Muller, Dekker, Den Boer). Helpfully, she indicates in footnotes where scholarly consensus has shifted away from Carl or Jeremy Bangs toward Keith Stanglin, Richard Muller, etc. Second, students of Muller’s scholarship will appreciate Seirhuis’s sensitivity to the formative influence of genre in the transmission of theological content, particularly when a genre is itself shaped by a broader literary culture in which authors are conscious of their political utility. Third, Sierhuis flags up the key Dutch-language scholarship for an English-speaking audience, so that the industrious student may pursue further research on her own.

Sierhuis’s splendid analysis goes a long way toward illuminating the heart of the religious and political crises ignited by the Arminian controversy: the related battles over “predestination, the locus of sovereignty in the Republic, the relationship between the clergy and the civil magistrate, and the concomitant debates on liberty of conscience” (p. 10). It models theological precision in political historiography, and will prove useful to students and pastors, as well—not least for reminding its reader to register the dignity and danger of ideas at play in the contemporary public sphere.