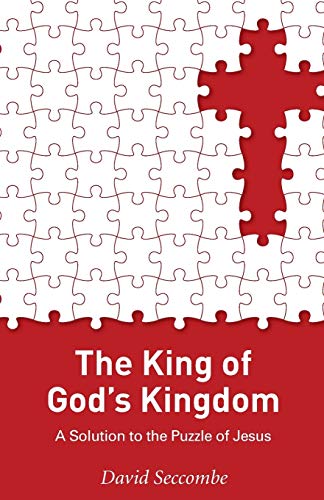 THE KING OF GOD’S KINGDOM

The King of God’s Kingdom is essentially a ‘life of Jesus’, a work intended to get behind’ the text of the canonical Gospels to the real historical Jesus. What sets this work apart from so many of the works that fall into this category is that the author clearly approaches the question from the standpoint of an orthodox confessional faith. Clearly Seccombe believes that the gulf between the literary Jesus—often described as the Christ of Faith—and the historical Jesus is not as great as it is often made out to be. The work thus sets out to build a composite picture of Jesus from the four canonical Gospels, a picture that is largely chronological in character, tracing Jesus life and ministry, though also to some extent ordering the material according to certain overacting themes. One striking departure from the chronological treatment of Jesus’ life is the treatment of evidence for the resurrection at the beginning of the work, a strategy that allows Seccombe to foreground the importance of the resurrection for a proper understanding of the life and death that preceded it.

The book has a number of real strengths. First, Seccombe is clearly conversant with a broad range of modern scholarship on the Gospels, concerning both biblical interpretation and sociological background. I am named to think that the book is at its strongest when transparently interacting with this scholarship, although this may reflect my own interests more than anything. Second it is written in a warm and accessible style, a fact that certainly distinguishes it from some of the more dense contributions to historical Jesus study and that makes it a good production to this area of scholarship. Third, there is a humility about Seccombe’s argumentation that is both refreshing and convincing: where he feels he is wandering out of his areas of expertise, he is quite willing to say so, a fact that makes his more solid arguments seem stronger.

Despite these strengths, however, there is a sense that the book falls between the stools on which it seeks to if intended to be read by a popular, rather than an academic audience (as the style and the presentation seem to suggest) then the length of the book would seem to be a problem, as it is likely to intimidate and deter many readers. On the other hand, an academic audience would probably feel that a great many important issues—such as the evidence for a Q-document of the question of non-canonical gospels—are glossed over.

Taking these strengths and drawbacks into account, the audience most likely to benefit from this book is, in my view, that of undergraduates in Biblical Studies programmes. The book demonstrates that it is possible to be conversant with modern Gospel scholarship and yet retain a confessional understanding of Jesus. By integrating something of the vast amount of secondary literature on the historical Jesus into its conservative understanding of the Gospels, the book will serve as a useful companion volume to the more in-depth academic material that students will encounter in the course of their studies, providing them with a framework within which they can assess this material and some helpful arguments in support of a conservative understanding.